There is little doubt that people are grateful that they have dogs in their life. However, a Nepalese festival takes the canine appreciation to a completely different level. Tihar is a Hindu festival that celebrates animals and siblings during a five-day period. Not surprisingly, the second day known as Kukur Tihar is a truly special one because it honors dogs and their friendship with mankind.

Tihar is also known as the festival of lights and is celebrated in October or November. The festival honors Laxmi, the Hindu goddess of wealth, fortune, and prosperity. In the five days of the festival, people pay tribute to crows, cows, oxen, and even brothers. However, it is Kukur Tihar and the absolute worship of dogs that always gets the biggest international coverage.

A lucky pooch is showered with flower petals and covered with colorful powder during the Hindu festival.

Source: Kathmandu and Beyond

During Kukur Tihar, people honor their beloved pets by placing tika on their foreheads. The dogs are also given colorful flower garlands and treated with delicious food.

A group of puppies pose with their garlands as policemen celebrate Kukur Puja. 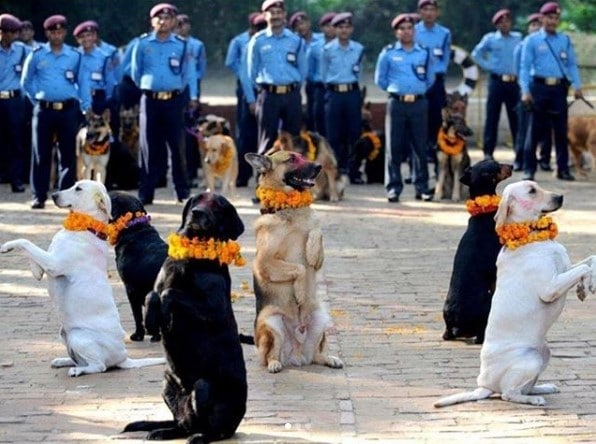 Pets are not the only ones who are celebrated during Kukur Tihar. The Nepalese policemen also take time to honor canines who are part of the force and thank them for their loyalty and bravery.

Dogs certainly hold a special place in Hindu mythology. In Mahabharata, the deity Bhairava has a dog for his vahana or steed. Sarama, the mythological mother of all dogs, appears as Indra’s companion in Rigveda.

In addition to helping the god-king recover his stolen divine cattle, Sarama also taught people how to milk cows and therefore save humanity.

In Hindu legend, dogs are believed to protect Yama, the god of death as well as the gates of Naraka. 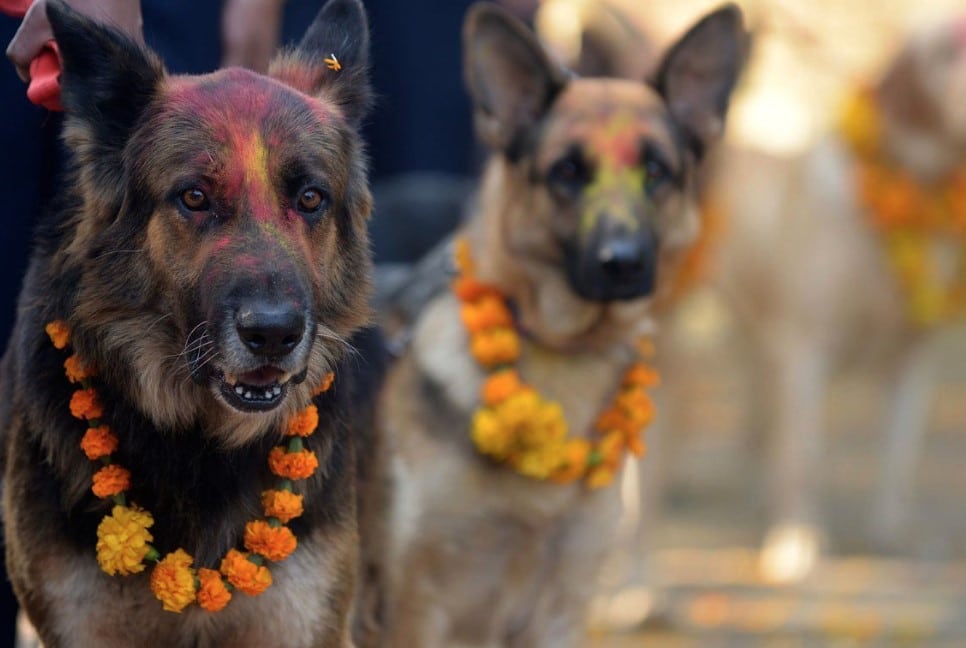 Source: Kathmandu and Beyond

Although Kukur Tihar is certainly a wonderful festival that allows animal lovers to worship dogs, it is important to remember that your furry companions need to be loved every day. Nevertheless, Kukur Puja is a colorful and happy reminder that dogs chose to become man’s most loyal companions.