How much do you love your bride-to-be? Let this groom lip-synch all the ways.

Getting married to someone you love can be the pinnacle of your existence, especially if you have a groom like this guy, who feels words aren’t enough to express his love and devotion, he has to render his promises in song. Well, in a lip synch mini-concert, anyway.

Meet Jared Basham, an outgoing and unconventional guy who’s head over heels in love with his bride, Kyndra. Despite his friendly nature, Basham has admitted he isn’t the sort of fellow who’s wholly in touch with his emotions, which sometimes causes him to struggle to express his feelings. Particularly the way he feels about his lovely bride.

But Jared loves music, and recalling how he used to serenade Kyndra with his out-of-tune voice over Skype while she was deployed in the Air Force, he decided to make his wedding vows as memorable and as off the wall as possible.

When the big day came along, and the officiator handed him the mic, he whipped out his sunglasses and proceeded to express his feelings in the best way he knew possible…

Jared says he wanted to show all the deep feels he felt in the most creative and absurd way he could think of, and so making like a blonde John Travolta, he launched into “You’re The One That I Want” from Grease.

Danny Zuko never had it this good

He also did the classic All-4-One wedding song, “I Swear,” and capped it with Whitney Houston’s “I Will Always Love You.”

He swears he does 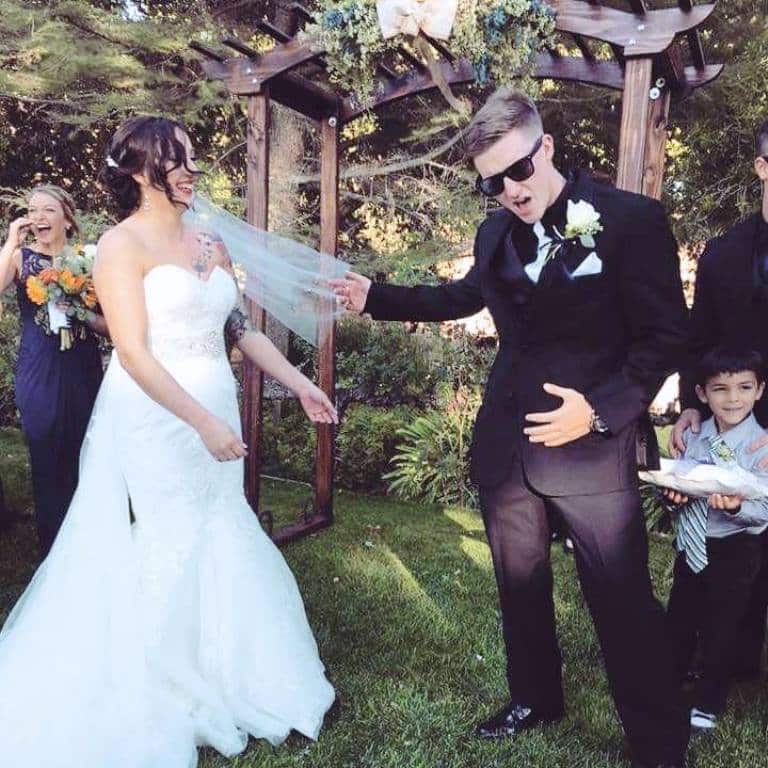 Kyndra was blown away, and so was the crowd at their wedding.

Honestly, with all the passion he gave his performance, Jared could have been in a boy band. A lip synching one, that is. Even his groomsmen, with their identical haircuts and glasses, shuffled and lip synched along, making their show all the more worth watching.

And his bride? Kyndra was smiling so hard during Jared’s unique presentation, she said the perfect vows reflected his personality to a T.

How far would you go to show how much you love somebody?