The Great Pyramid of Giza — which was built 4,500 years ago (2,560 to 2,540 BC) — is located at Al Haram in Egypt’s Giza Governorate. It is within a complex along with other equally awesome structures.

Not surprisingly, the pyramid complex has been declared as a United Nations Educational, Scientific and Cultural Organization (UNESCO) World Heritage Site.

The Great Pyramid is the oldest of the 7 Wonders of the Ancient World. 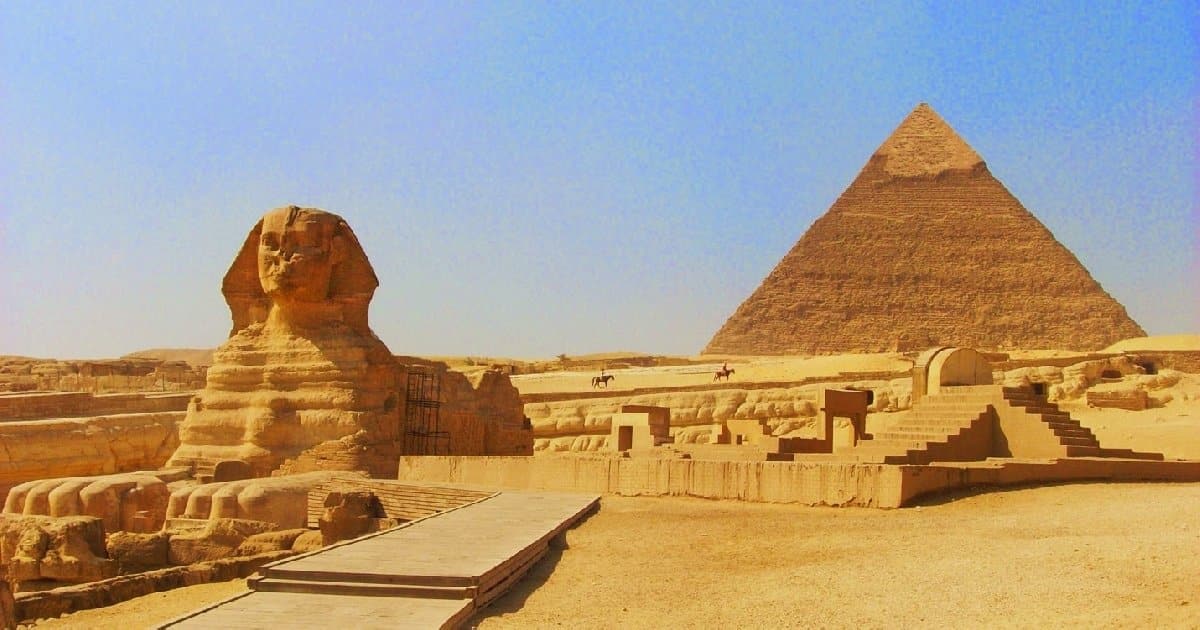 The Great Pyramid of Giza — which is also called the Pyramid of Khufu or the Pyramid of Cheops — has the distinction of being the oldest of the Seven Wonders of the Ancient World. It’s also the only one to remain largely intact.

The Pyramids of Giza hold so many mysteries. 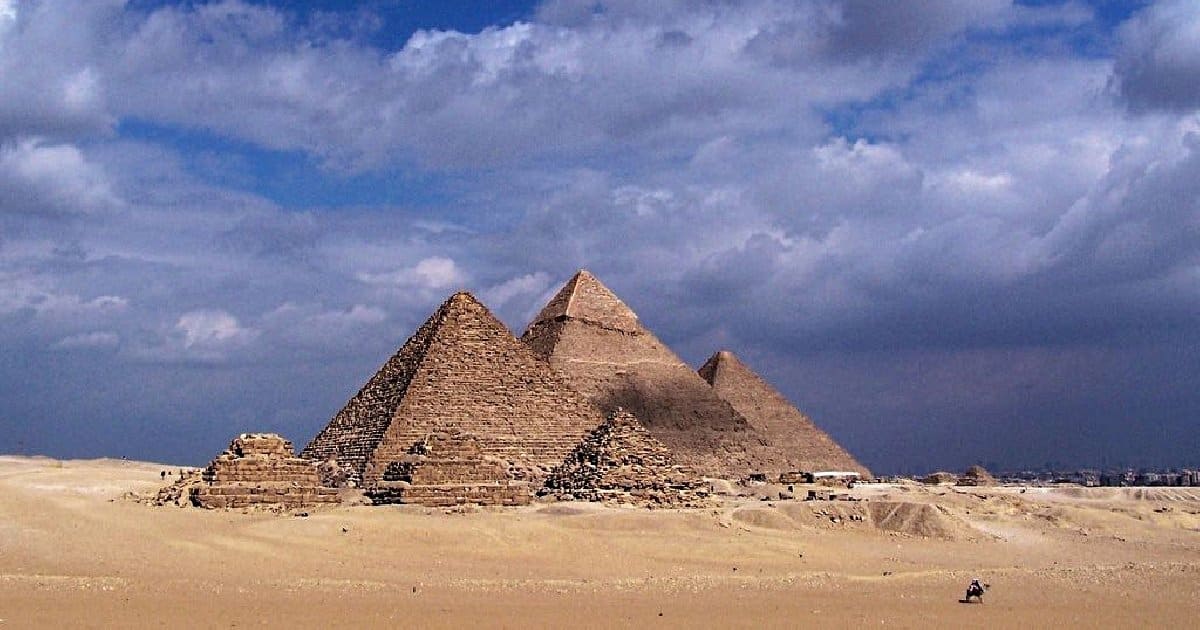 Scholars have remarked that the engineering used in building the Great Pyramid of Giza was ahead of its time. There are even those who claim that technology from alien life forms was used to build the pyramid.

Here are 15 details that continue to convince people that the Great Pyramid of Giza was possibly created by extra terrestrials.

1. Its axis aligns with the Earth's "true North." 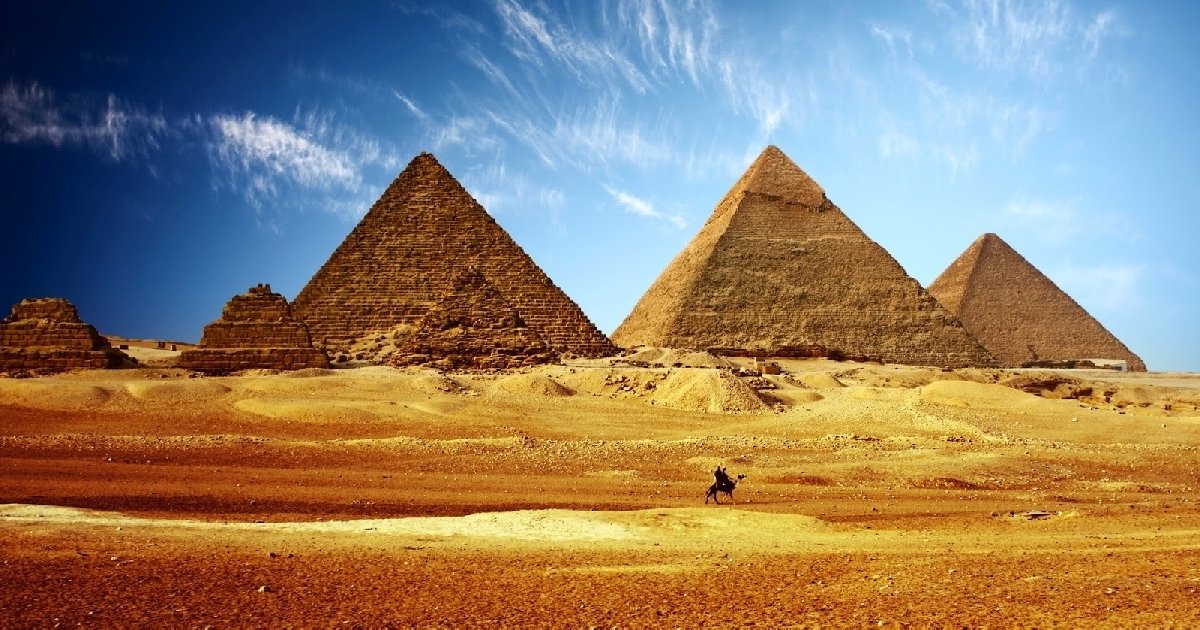 In her article for the New Scientist, Hazel Muir pointed out that the alignment has “an accuracy of up to 0.05 degrees.” To this day, nobody can figure out how the Egyptians did this. Muir further explained:

“A wobble in the Earth’s axis of rotation (called precession), means that the positions of the stars changes gradually over time. In the third millennium BC, no star sat at the North Pole. Instead, all the stars in the north sky rotated around an imaginary point marking the North Pole.”

The Egyptians didn’t have the means to pinpoint the North Pole. 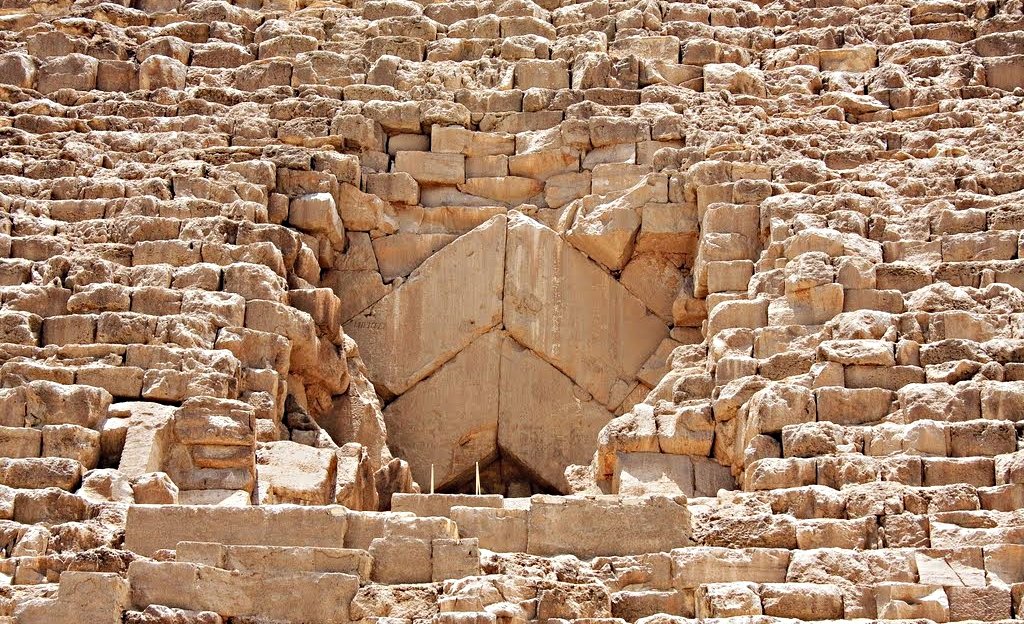 “The original casing stones were made of highly polished Tura limestone, meant to reflect the sun’s rays, and were accurate within 1/100th of an inch,” noted David Hiskey in Today I Found Out. The stones measured five feet in length and dive feet in height. They were six feet thick and weighed around 15 metric tons each. Unfortunately, over the years, these beautiful casing stones were taken by various people.

Again, the Egyptians didn’t have the technology to produce highly polished limestones that were cut with such precision. There are those who believe that the pyramid was meant to reflect intense light that would serve as some sort of signal from Earth to space.

3. It’s the only eight-sided pyramid in Egypt.

When viewed from above, it is evident that the four faces of the pyramid are all actually slightly concave. An Ancient Code article stated:

“This phenomenon is only detectable from the air at dawn and sunset on the spring and autumn equinoxes, when the sun casts shadows on the pyramid.”

Scholars still can’t figure out how or why the Egyptians built the pyramid with eight sides. 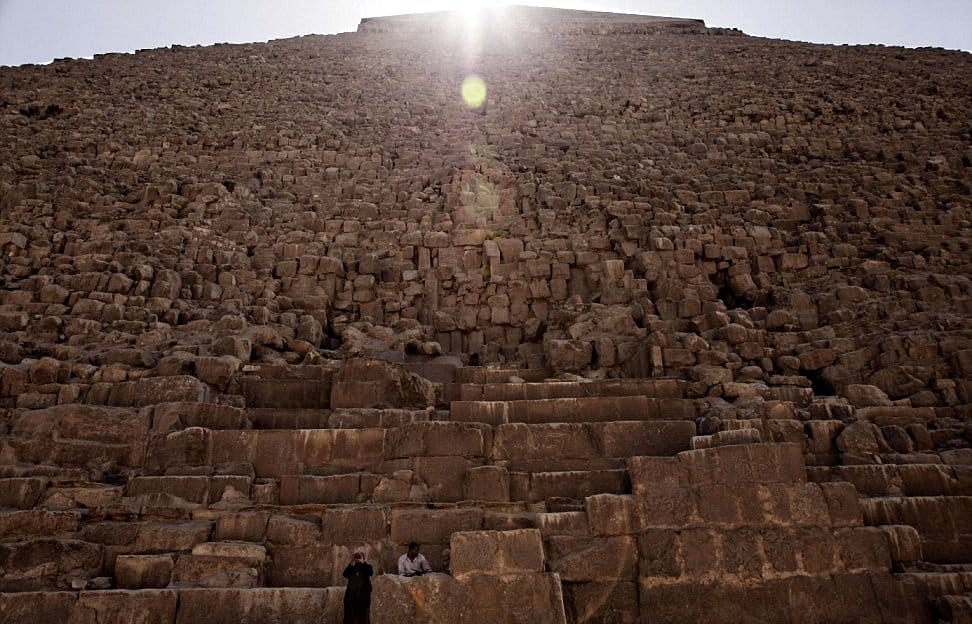 While many great structures around Egypt have been destroyed by earthquakes, the Great Pyramid has been spared from destruction because of its earthquake-proof construction. “The Great Pyramid’s cornerstones have balls and sockets built into them,” noted Formless Science. Curiously enough, there’s no indication how Egyptians managed to pull this off.

5. It's connected to Orion's Belt. 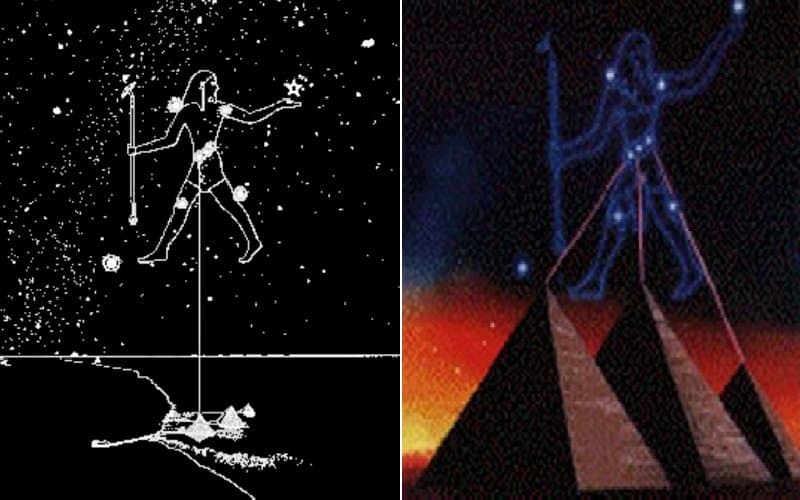 The three stars on Orion’s Belt — which is a detail in the bigger Orion constellation — correspond with the three pyramids if Giza. There’s no solid explanation for this.

6. There are no mummies inside it. 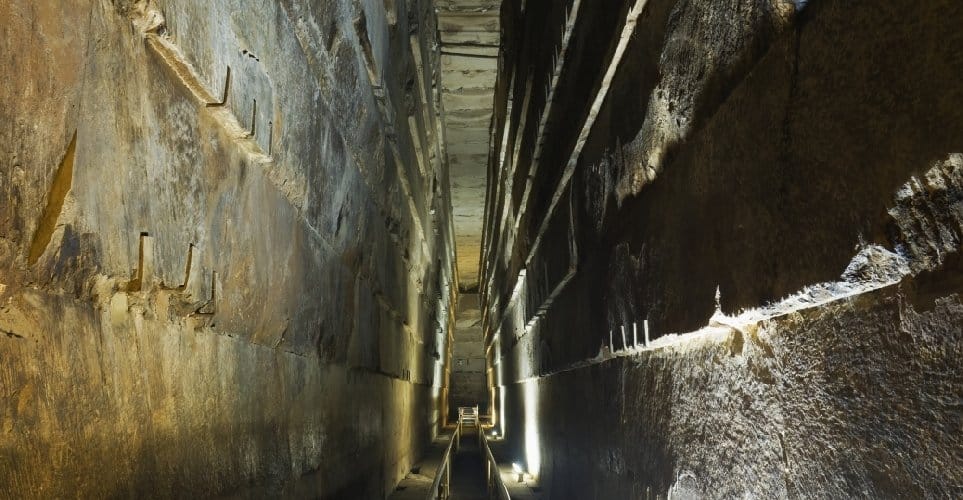 Scholars have taught us that pyramids are actually used as tombs for Egyptian royalty. However, no mummies were found inside the Great Pyramid of Giza.

7. A ship was found inside it. 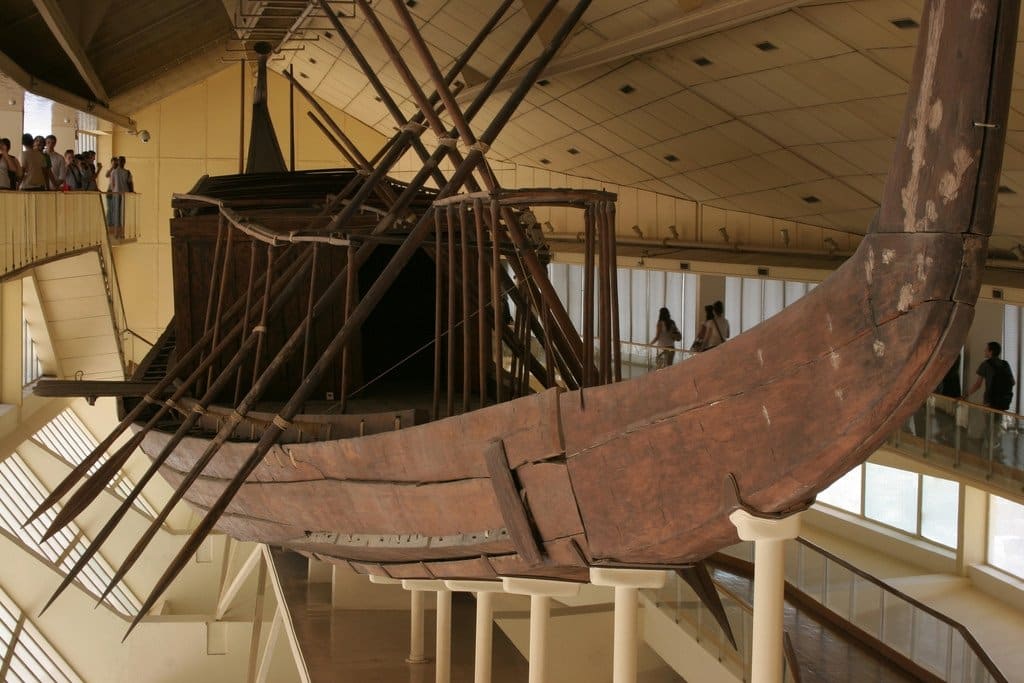 In 1954, archaeologists found a 153-foot long and 20-foot wide boat made from Lebanese cedar inside a sealed pit situated at the foot of the Great Pyramid. Known as a “solar boat,” the vessel was filled with objects that were believed to be used for the journey to the afterlife. The ancient ship is now on display at the Giza Solar Boat Museum.

8. The summer solstice sunset appears right smack in the center. 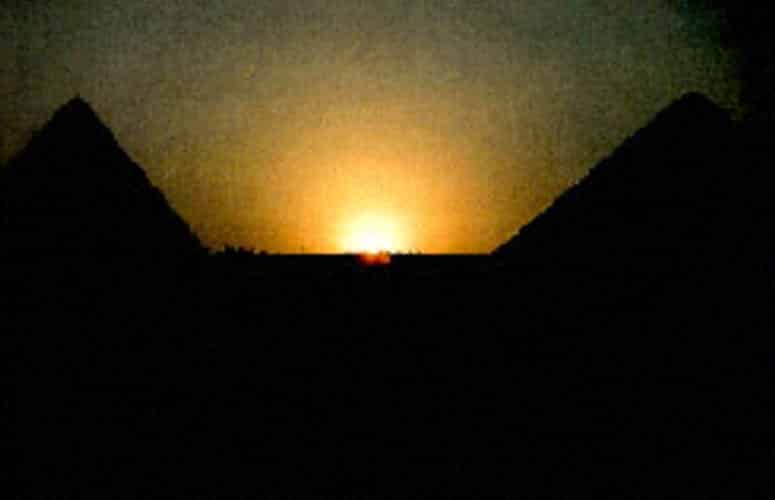 During the evening of the summer solstice, from the view of the Sphinx, the sun sets right between the Great Pyramid and the slightly smaller pyramid beside it. A paper submitted to the Michigan State University pointed out:

This fact was not discovered until long after ancient Egypt’s power had waned.

In 1993, a robot used to explore the nooks and crannies of the Great Pyramid ran into a small door set that had metal pins. Interestingly, metal is not part of any other known structure in the pyramid. Alien conspiracy theorists speculated that these metal pins were fragments of the technology used by out-of-this-world life forms.

10. The internal structure is a puzzle. 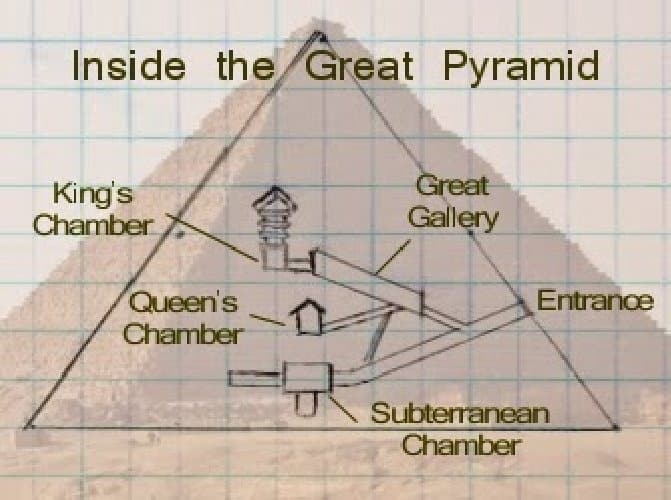 The Great Pyramid has three main chambers and intricate passages. Over the years, a couple of smaller secret chambers have been discovered. It is the only pyramid in Egypt with descending and ascending inner passages. Scholars still can’t explain how the pyramid builders were able to cut a passage through the solid rock that’s 300 feet long by three feet wide in order to reach the lowest chamber.

11. There's a coffer that's being compared to the Ark of the Covenant. 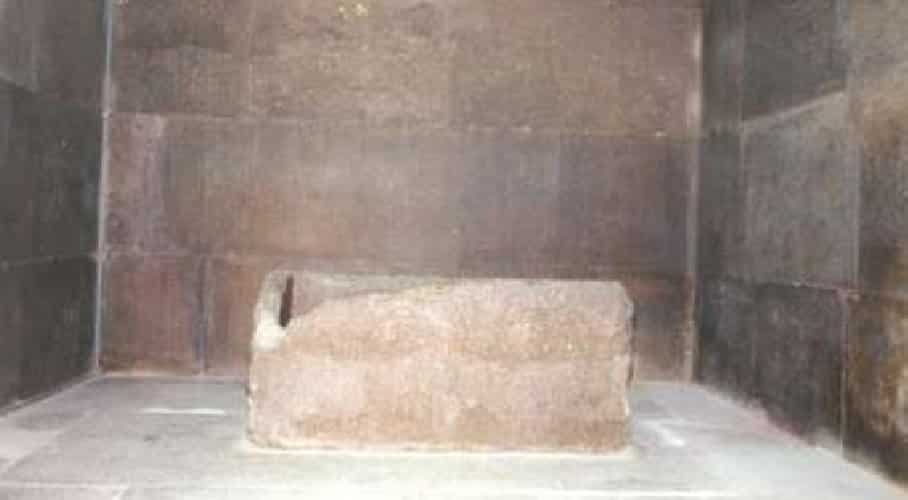 There are those who say that the volume or cubic capacity of the coffer found inside what’s being called as the King’s Chamber has the same specifications as the Ark of the Covenant mentioned in the Bible.

Incidentally, the coffer is too large to fit through the passages in the Great Pyramid. As such, scholars concluded that it must have been put in place during construction. But what is the purpose of that?

12. It has a secret chamber with hieroglyphs. 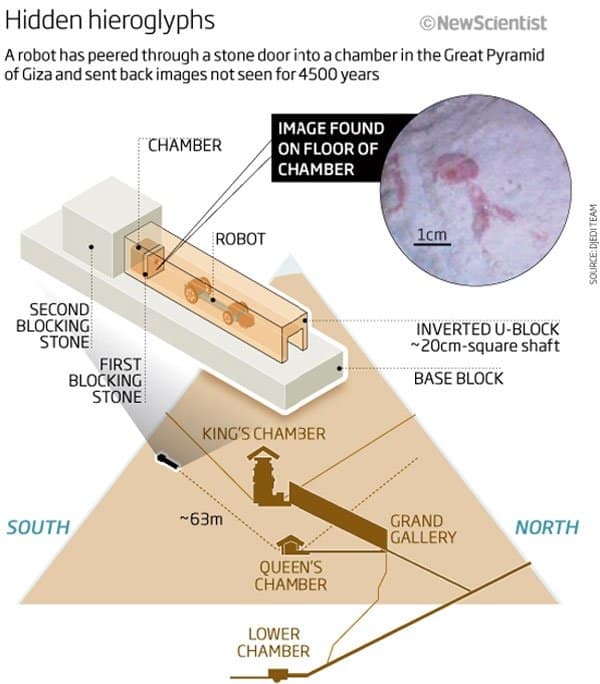 In 2011, a robot sent on yet another exploration trip inside the Great Pyramid found a small hidden chamber. The chamber was empty but it happened to have red hieroglyphs inside it. Until now, nobody has deciphered the markings.

13. The material used is astounding. 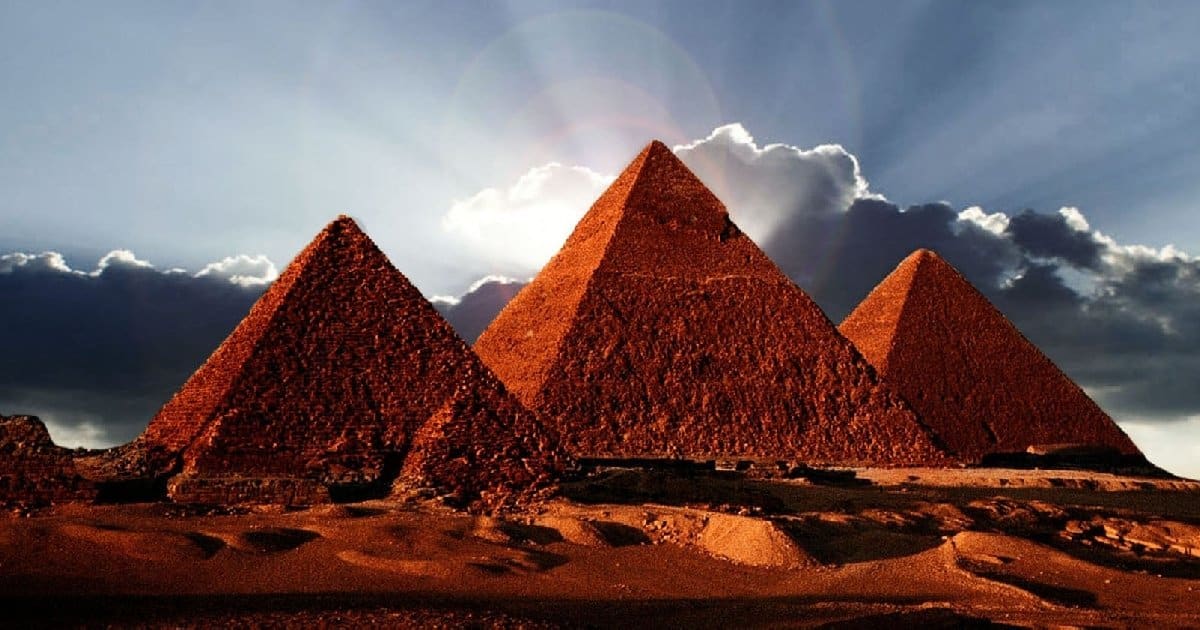 The Great Pyramid is estimated to be made of around 2,300,000 stone blocks that weigh from two to 30 tons each. Indeed, some stone blocks reportedly weigh over 50 tons. How were the Egyptians able to transport and position all these heavy stones?

14. It recreates the Orion-Milky Way position. 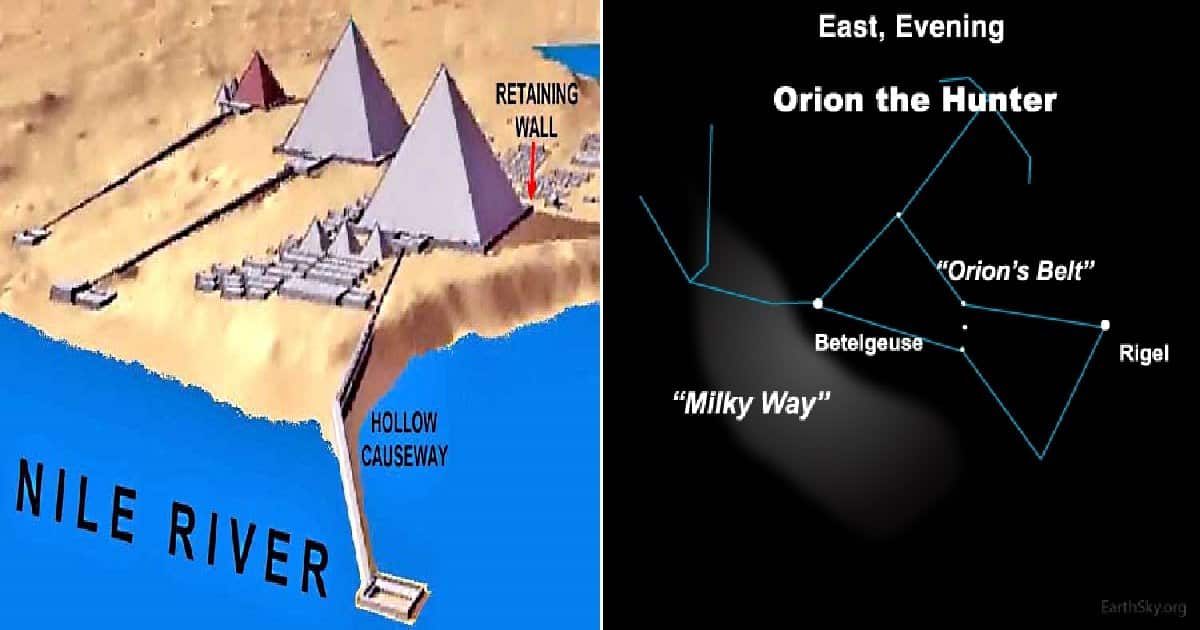 It’s been pointed out that the orientation of the Pyramids of Giza to the Nile recreates Orion’s orientation to the Milky Way. The ancient Egyptians had no way of easily knowing this.

15. It fleshes out a Math mystery. 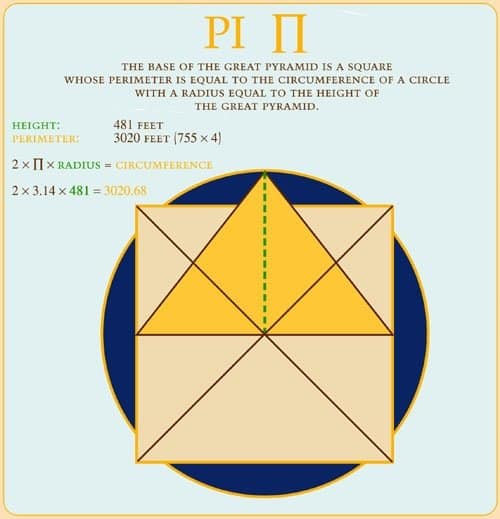 The ancient Greeks are credited for discovering the mathematical equation for Pi (the relationship between the radius of a circle and its circumference). However, it would seem that whoever designed the Great Pyramid of Giza knew about Pi way ahead of the Greeks. The other mathematical constant employed in the construction of the pyramid include Phi (the Golden Ratio that appears throughout nature). These details are much too complicated for those who aren’t Math aficionados, but you can check out The Global Education Project‘s numbers chart.