No story about extinction is good and this one is not an exception. Meet the great auk – a bird that has been extinct since the mid-1800s.

Also called garefowl, the flightless seabird was part of the family Alcidae in the order Charadriiformes. Its body measures approximately 30 inches (75 cm) in length with short wings that span less than 15 cm. It has a black head and back, white chest, and a characteristic white spot between the bill and eyes; its black bill has about eight transverse grooves. Although it is by no means related to penguins, great auks were called “penguins” back then. 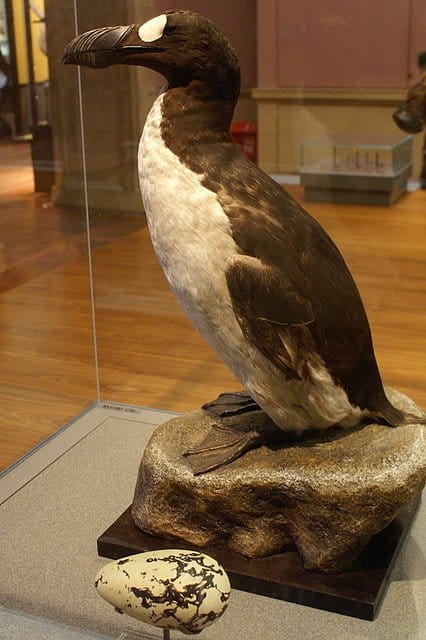 It is believed that the great auk bred in colonies on the rocky islands in the Northern Atlantic coasts; however, fossils have also been found in Spain, Italy, and Florida.

Great auks are impressive swimmers, making it an efficient hunter underwater. But when on land, it becomes clumsy, rendering it utterly defenseless against predators such as polar bears and against hunters foraging for food. Its flesh was also widely used as bait.

Sadly, the population of the great auks was severely reduced due to massive hunting, as there was high demand for its down in Europe during the mid-1600s. Its down was widely used to make pillows. At that time, the great auk colonies that were nesting on Europe’s Atlantic coast were almost wiped out.

Scientists then realize that the number of great auks was dwindling fast and that something had to be done to protect the birds. Environmental laws that aim to protect the great auks were passed, but these efforts clearly were not enough to prevent the demise of the species.

An account that was written by Aaron Thomas of HMS Boston in 1794 details how great auks were killed then:

If you come for their Feathers you do not give yourself the trouble of killing them, but lay hold of one and pluck the best of the Feathers. You then turn the poor Penguin adrift, with his skin half naked and torn off, to perish at his leasure. This is not a very humane method but it is the common practize. While you abide on this island you are in the constant practize of horrid cruelties for you not only skin them Alive, but you burn them Alive also to cook their Bodies with. You take a kettle with you into which you put a Penguin or two, you kindle a fire under it, and this fire is absolutely made of the unfortunate Penguins themselves. Their bodys being oily soon produce a Flame; there is no wood on the island.

By 1800, the great auk disappeared from Funk Island in Newfoundland, Canada. In July 1840, the last great auk was allegedly seen on the islet of Stac an Armin, St. Kilda, Scotland. Three men caught the garefowl, taking note of its short wings and the white spot on its head. The men tied the bird up and kept it alive for about three days until a storm hit. Believing that the great auk was a witch and that the storm was its doing, the three men beat the birds with a stick, killing the last great auk in Britain.

The Great Auks at Home, oil on canvas by John Gerrard Keulemans. 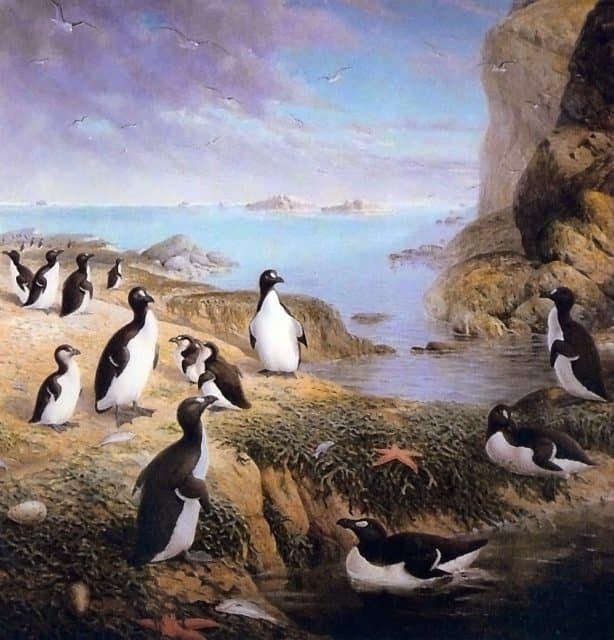 The last known colony of great auks was believed to live on Geirfuglasker in Iceland. The islet, being surrounded by cliffs, was virtually inaccessible to humans. However, a volcanic eruption in 1830 caused the islet to be submerged in water, forcing the great auks to move to Eldey, a nearby island.

When the last great auk colony was discovered in 1835, almost fifty birds were found. Museums, then, in an attempt to keep the bird’s skin for preservation and display, quickly picked off birds from the colony, further reducing its number to almost zero.

The last pair of great auks, which was found incubating an egg, was killed on the island of Eldey on July 3, 1844, on order of a merchant who wanted to get hold of specimens. Jón Brandsson and Sigurður Ísleifsson strangled the adult birds and Ketill Ketilsson smashed the egg using his boot. 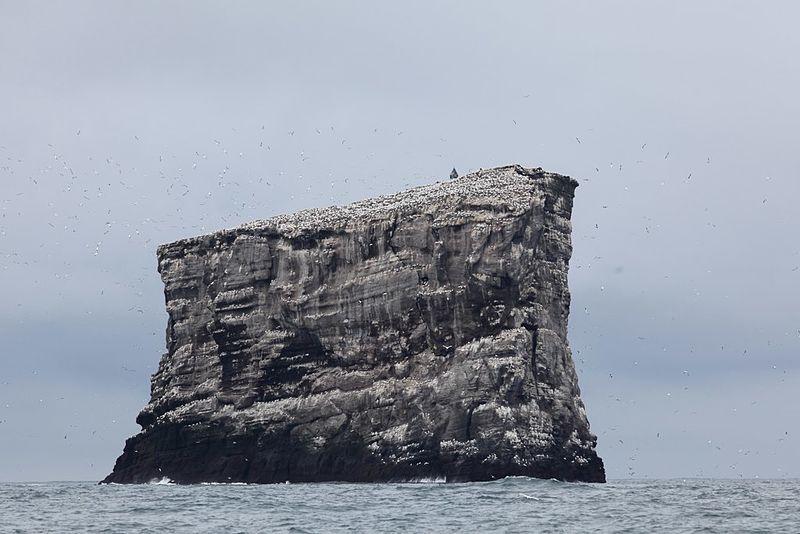 John Wolley, a naturalist who specialized on great auks, interviewed the men who killed the last great auks. Ísleifsson recounted how they killed the birds:

The rocks were covered with blackbirds [referring to Guillemots] and there were the Geirfugles … They walked slowly. Jón Brandsson crept up with his arms open. The bird that Jón got went into a corner but [mine] was going to the edge of the cliff. It walked like a man … but moved its feet quickly. [I] caught it close to the edge – a precipice many fathoms deep. Its wings lay close to the sides – not hanging out. I took him by the neck and he flapped his wings. He made no cry. I strangled him.

At present, scientists are looking for a way to bring back great auks using genes retrieved from fossils and preserved organs.