An arachnid dating from millions of years ago was discovered well-preserved in a lump of amber sporting an impressive boner for its species.

The fossil of a Halitherses grimaldii, an ancient harvestman arachnid considered cousin to today’s Daddy Long Legs, was unfortunately trapped in oozing resin from a tree which preserved his body, and his fully erect tool, perfectly.

The poor spider must have died with a massive case of the blue balls, only this one 99-million-years-old.

The historic arachnid Casanova and his epoch-making phallus… 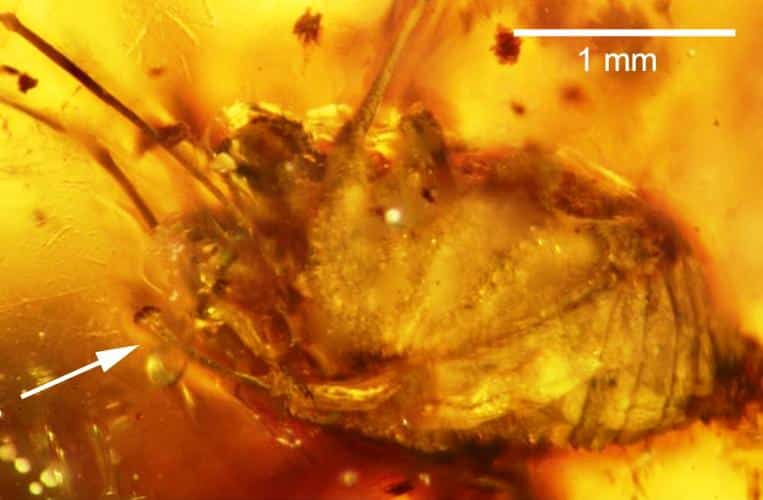 The male Harlitherses grimaldii spends several months in puberty stage, and when it finally reaches adulthood, it can boast of a sexual organ nearly half as long as its body when it is when fully engorged.

How many human men can boast of a half-a-body-length organ?

Unlike present day spiders and scorpions, which use their legs to transfer their sperm to the female of their species in tidy little packages, the H. grimaldii inserts its fully-extended member into the female’s genital opening.

This particular ancient harvestman preserved in amber was in a fully-aroused state when the resin entombed his body, giving the whole world a glimpse of his ultimate frustration, and making him the first well-preserved fossil to ever exhibit engorged genitals.

In this case, he may even make the record for having the longest case of the blue balls in animal history…99 million years worth.

On the other hand, the H. grimaldii may have merely been struggling for his life after being trapped in resin, causing his blood pressure to shoot up, and his member to become accidentally engorged.