Whether you’re Christian or not, you must admit that you know at least some of the story about Jesus Christ.

It was said that after his crucifixion by the Romans in AD 30, he was laid on a burial bed made from the side of a limestone cave, but when women came to the tomb to anoint his body three days later, it was said that there were no remains present – hence pointing to his resurrection after death.

Christians believe that Christ's body was laid on a slab of limestone. The slab pictured here has been encased in marble since 1555, and it has become a place of worship for many Christians. 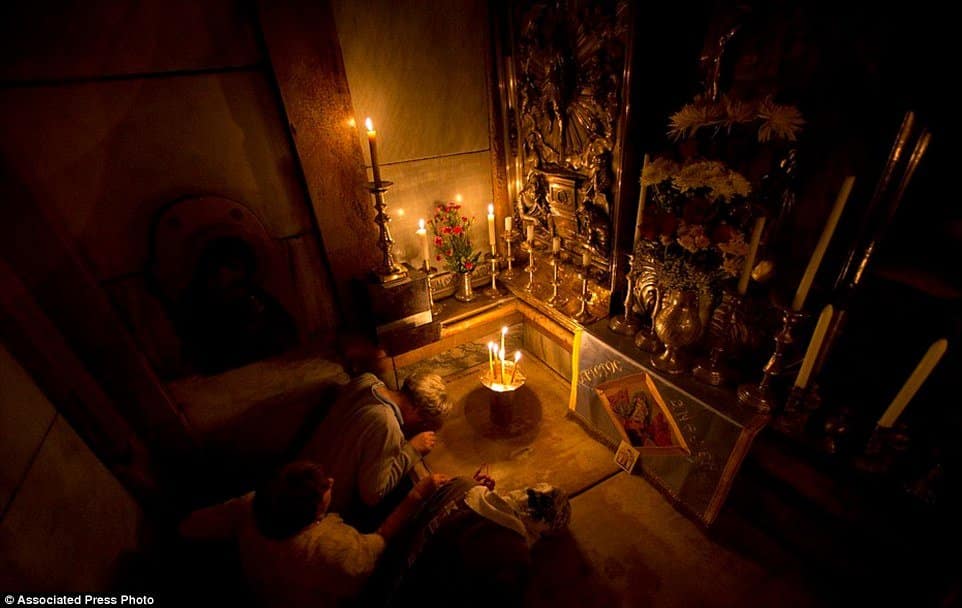 Because of the holiness of the site to different branches of Christianity, the Roman Catholic, Greek Orthodox, and Armenian churches are jointly responsible for maintaining separate sections of the church. 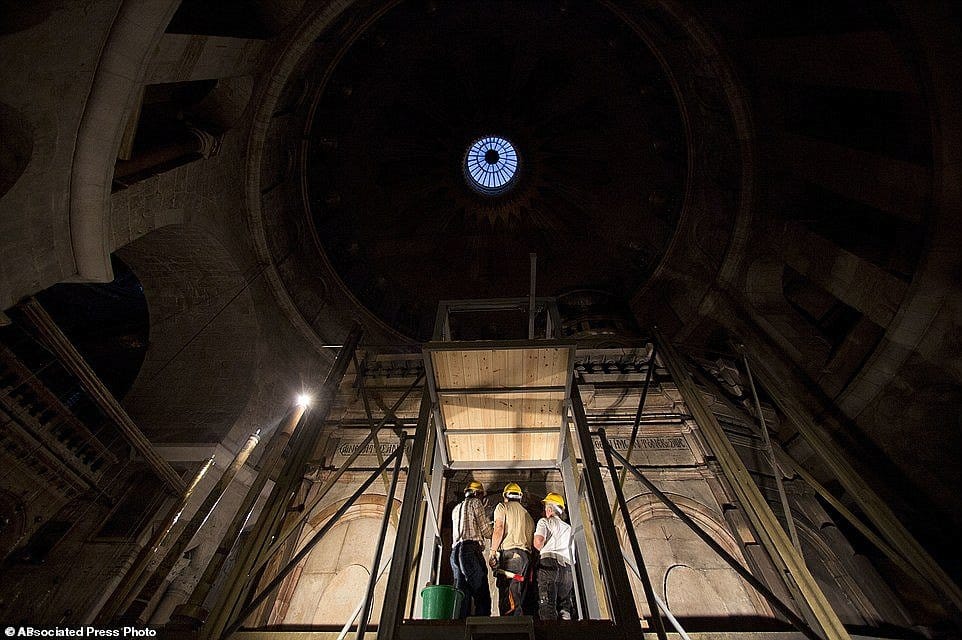 Jesus Christ’s burial shelf is enclosed by a shrine-like structure called the Edicule (or "little house" in Latin) housed within an early 19th century shrine in the Church of the Holy Sepulchre in the Old City of Jerusalem. 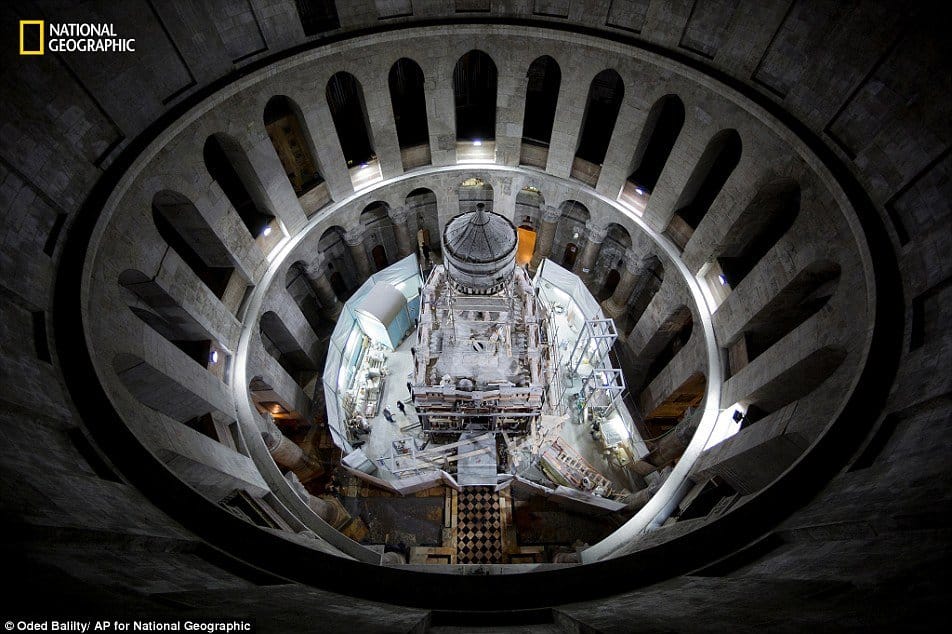 The Edicule is highly ornate with hanging oil lamps, columns, and oversize candlesticks. 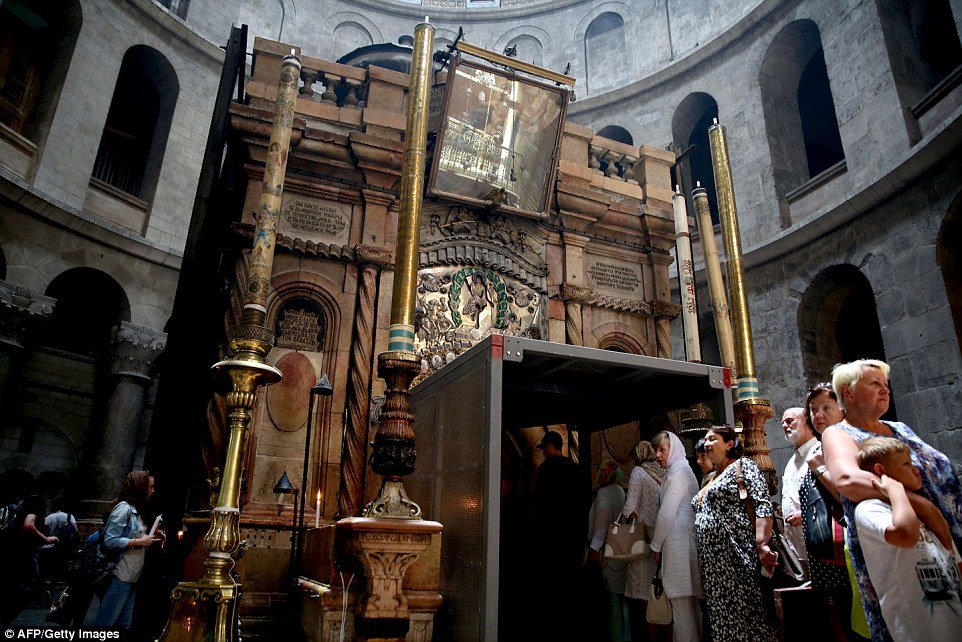 The edicule itself was last reconstructed in 1810 after being destroyed in a fire. Both the edicule and the tomb itself are undergoing restoration by a team of scientists from the National Technical University of Athens, under the direction of Scientific Supervisor Professor Antonia Moropoulou.

The Edicule and the tomb of Jesus beneath it has been untouched for at least 200 years. It was last reconstructed in the 19th century after a fire that destroyed it. 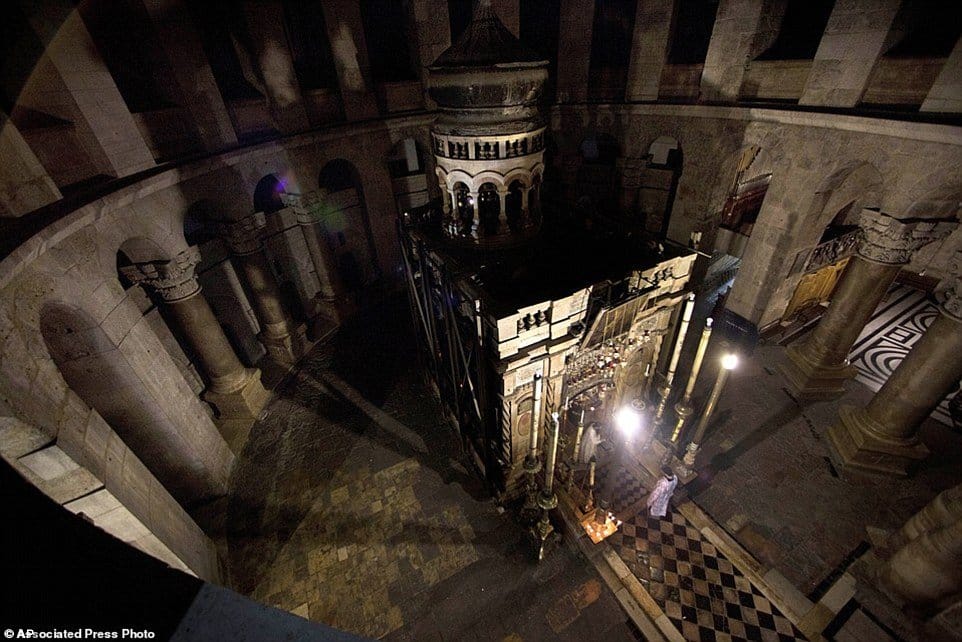 This is the first time in centuries that the tomb would be opened and studied, thanks to the restoration efforts headed by National Technical University of Athens. 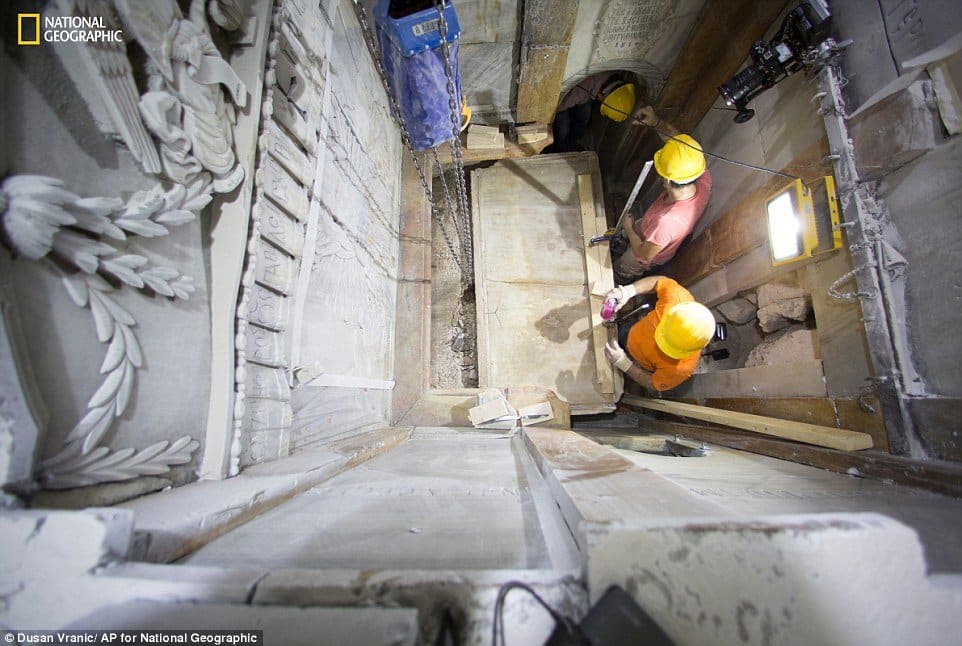 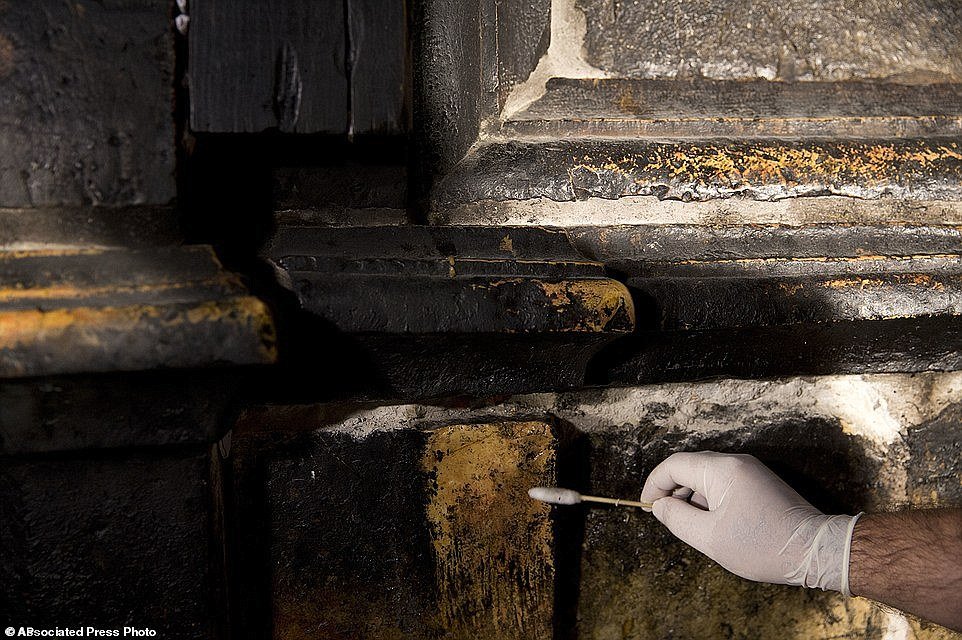 The restoration effort is necessary because of the site's exposire to environmental factors like water, humidity, and candle smoke. 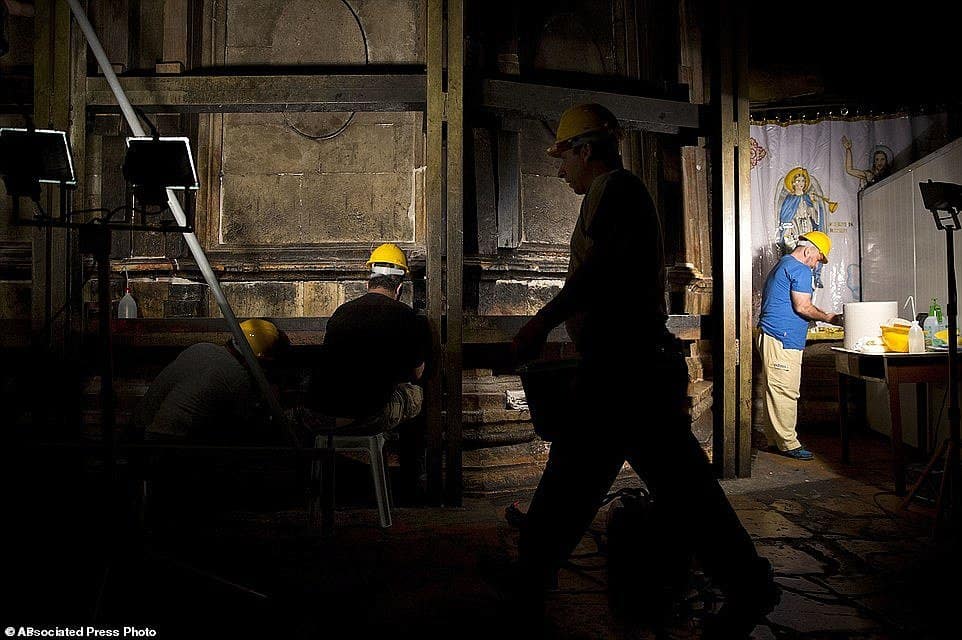 Because of this restoration, the researchers were given 60 hours to study the original surface of what is believed to be the burial bed of Jesus Christ. Through this research, they sought to understand the original form of the tomb chamber, as well as how it became a sacred site since it was identified by Helena, mother of emperor Constantine in AD 326.

However, due to the church being a holy site for many Christians, the restoration has been put on hold for two centuries. 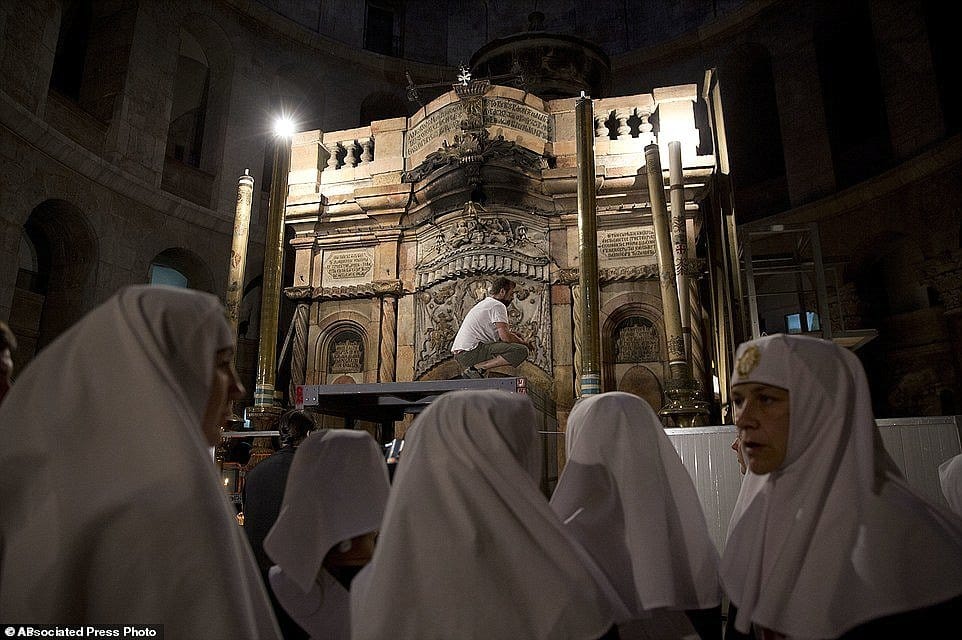 A Franciscan friar looks into the exposed tomb during the conservation work. 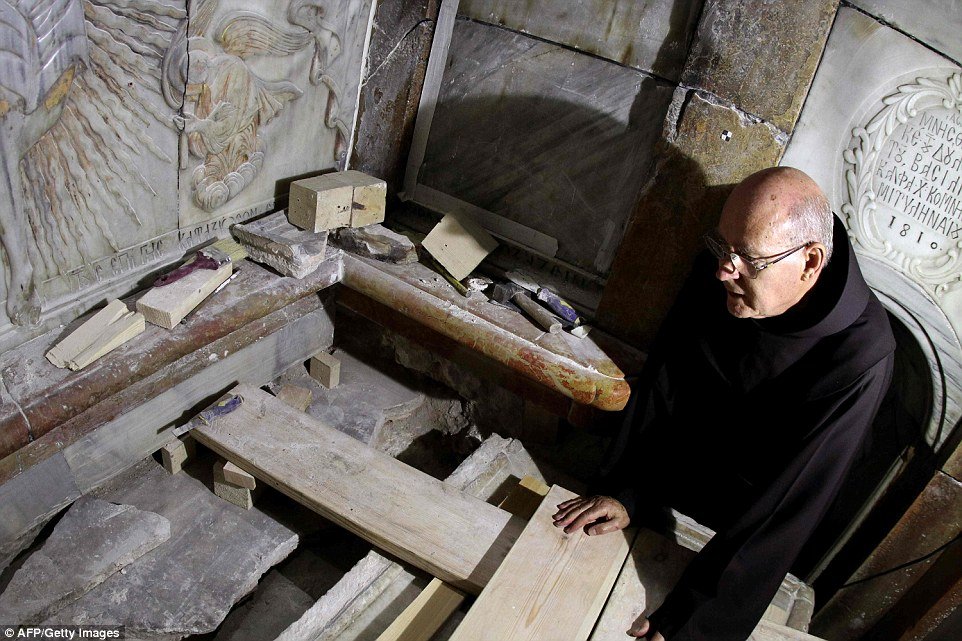 As the researchers exposed the marble that had encased the tomb, they found a remarkable discovery – another marble slab that has a cross carved onto its surface. 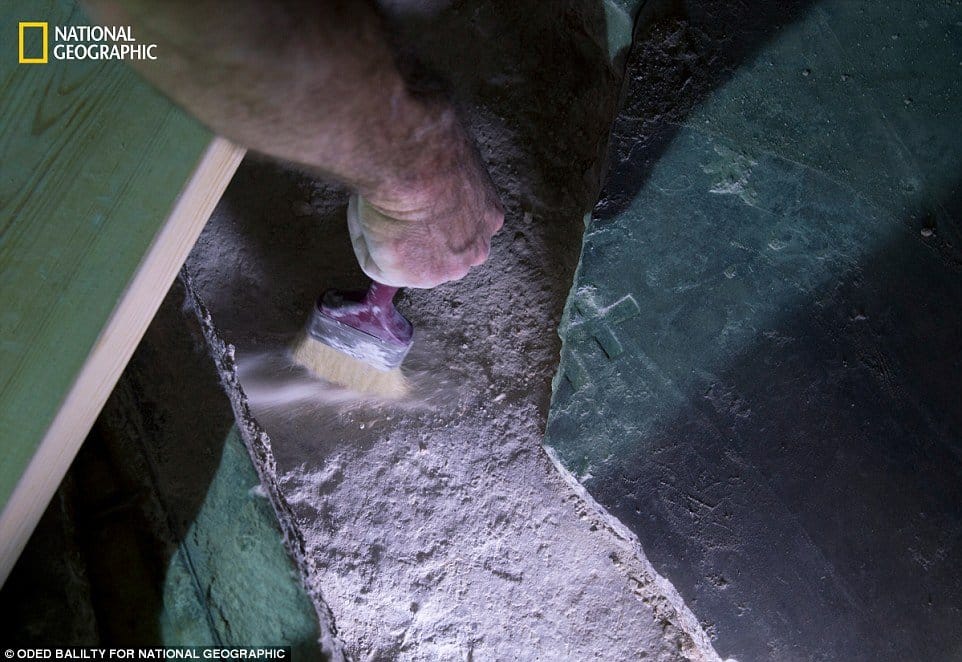 When Fredrik Hiebert, archaeologist-in-residence at National Geographic, saw the symbol, he was “absolutely amazed” by the discovery.

“We can’t say 100%, but it appears to be visible proof that the location of the tomb has not shifted through time, something that scientists and historians have wondered for decades.”

“This is the Holy Rock that has been revered for centuries, but only now can actually be seen,” said Moropoulou, who is leading the restoration of the Edicule. Because of this, the researchers extensively cataloged in case they might discover something else.

An ornate carving of the Resurrected Christ guards the site where his body is believed to have been laid. 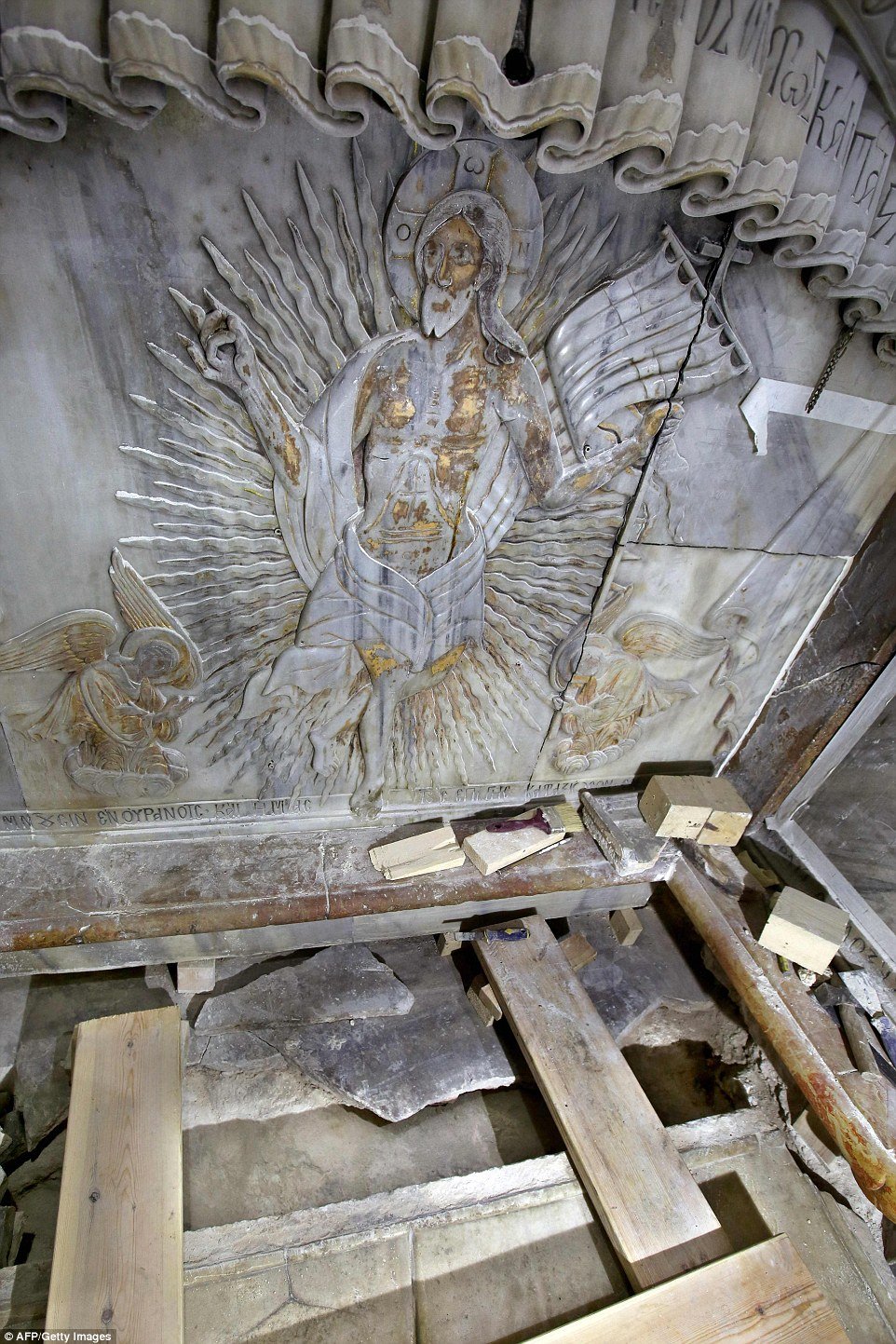 With a 60-hour deadline, the researchers hurry to gather as much information as they can. Pictured here are restoration experts covering the tomb once more. 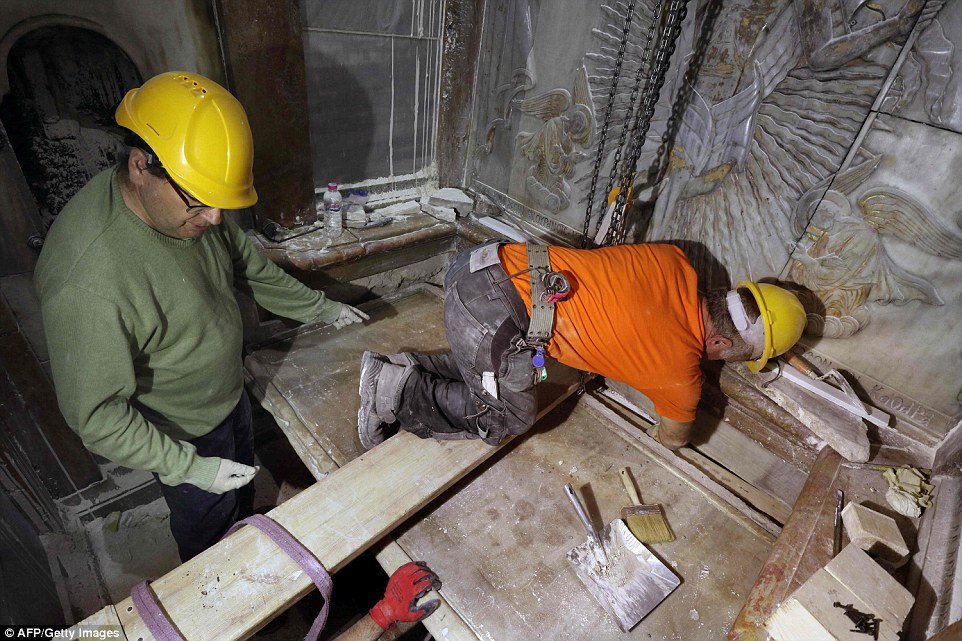 Due to time constraints and risk of over-exposing the burial site, the tomb had to be resealed, and will probably not be opened again for centuries. The restoration project for the entire site is due to be completed in 2017.