The use of plastic bags and containers makes our daily lives much more convenient. However, when we are done using them, the problem starts to pile up, literally. Plastics are non-biodegradable materials than cannot be destroyed by any means and thus stays on Earth forever. The question is how are we supposed to get rid of it from our lives? We are not exactly sure how, but most of these plastic wastes end up in the oceans.

One high school student named Boyan Slat saw the devastation that’s been happening in our oceans so for his school project, he tried to develop a device that can help clean the oceans. In 2012 — when he was just 18 — Boyan gave his first TEDx Talk about cleaning up the ocean. In his talk, he laid out his proposal for cleaning up the Great Pacific Garbage Patch, an enormous and still-growing island of plastic and other trash floating in the north Pacific ocean between California and Hawaii.

The Great Pacific Garbage Patch was first discovered in 1997 by sailor and ocean researcher Charles Moore when he was participating in the Transpacific Yacht Race.

Trash collects in that particular spot because of a gyre — a swirling vortex of ocean currents — in the north Pacific that draws marine debris together. A recent study found that the patch, consisting largely of plastic pieces, fishing nets, and other human refuse, is 4 to 16 times larger than previous estimates. It is now twice the size of Texas, or three times the size of France.

Charles Moore estimated that it would take 79,000 years to clean it up. Boyan Slat, however, said he believed that with the right technology and approach, the garbage patch could be gone in just five years. Not only that, but he could clean it in way that had minimal environmental impact and was actually profitable when all was said and done.

Isn’t such claim coming from a kid a bit outrageous?

Apparently not. Now 21 years old, Boyan is the owner and CEO of The Ocean Cleanup, which is a Dutch non-profit organization that aims to collect trash from the world’s oceans through technological ways. Since starting the Ocean Cleanup Foundation in 2013, Slat has been working tirelessly to study the issue and develop the technology to clean it up. Slat’s foundation is set to launch the largest ocean trash collection ever this year.

Slat has spent the past six years studying the ocean’s gyres and the Great Pacific Garbage Patch to better understand the scope of the issue and develop the most effective means for collecting the trash. The Ocean Cleanup Foundation is an impressive full-time operation with more than 70 engineers, researchers, scientists, and computer modelers working daily to rid the ocean of plastics.

Did I mention Slat was 18 when he founded the project? I can’t exactly remember what I was doing when I was 18, but it definitely wasn’t building a foundation to solve a major global problem. This young man’s intelligence, ingenuity, and initiative blows my mind.

And I’m not the only one. In 2014, Slat became the youngest-ever recipient of the UN’s highest environmental award, Champion of the Earth. And Time magazine named the Ocean Cleanup’s Ocean Vacuum prototype as one of the Best Inventions of 2015.

The entire project consists of placing anchored floating barriers throughout the ocean and allowing ocean currents to sway the trash towards the floating trash collectors. The collected materials will be processed at a later time. With this system, it seems as if the ocean will be cleaning itself!

The official cleanup is scheduled to start in the summer of 2018. Slat predicts that they’ll be able to collect half of The Great Pacific Garbage Patch in just 5 years. He originally said he thought the whole thing could be cleaned up in 5 years, but considering the exponential growth of the garbage patch in the past six years and the additional information they’ve collected since then, I think half in five years ain’t bad.

Slat and his team have found that the Great Pacific Garbage Patch contains approximately 1.8 trillion pieces of plastic. That’s 241 pieces for every human on Earth. Some of it breaks down into smaller pieces, but it always remains, threatening marine life, birds, and ultimately humans as we consume seafood.

The Ocean Cleanup machinery uses the ocean’s own currents and the physics of how plastic gathers and moves in order to collect it passively, without using unnecessary energy, effort, or resources.

In this unveiling of the Ocean Cleanup prototype, Slat explains how it all works:

For its first deployment, The Ocean Cleanup team is set to place their 2000-meter long system along the Tsushima coast, which is located between Japan and South Korea. As per statistics, the said coast area has been suffering from extensive pollution, amounting to about one cubic meter of ocean pollution per person per year. 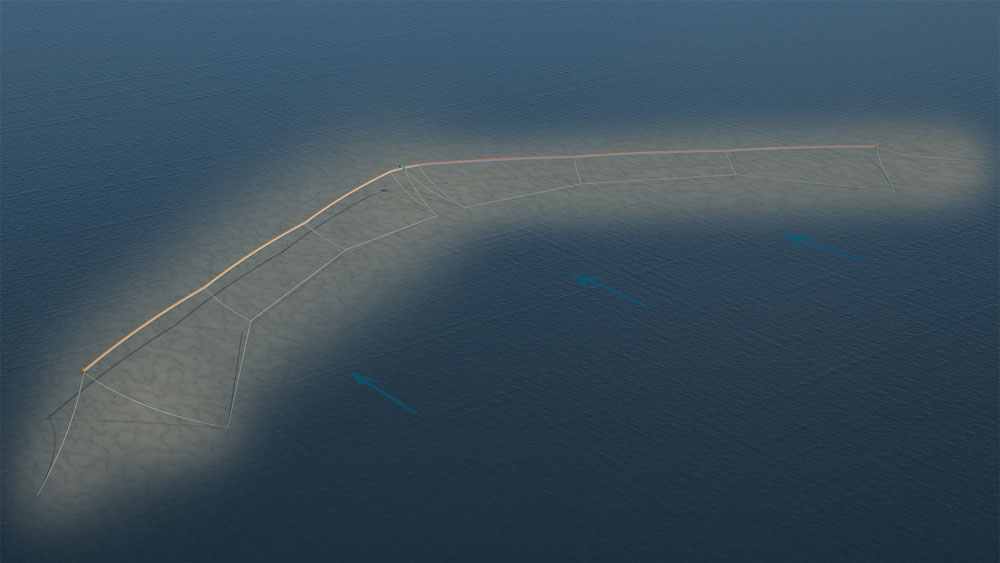 The first project is expected to last for at least two years, after which, the team plans to go the ocean between Hawaii and California within five years to set up a 100-kilometer system of the same project. Within 5 years, The Ocean Cleanup envisions that about half of the ‘Great Garbage Patch’ would be clean up, as per the organization’s computer modelling system.

“Taking care of the world’s ocean garbage problem is one of the largest environmental challenges mankind faces today,” Slat said. “Not only will this first cleanup array contribute to cleaner waters and coasts but it simultaneously is an essential step towards our goal of cleaning up the Great Pacific Garbage Patch.”