Dogs are awesome; they have shown incredible examples as they are loving, faithful, concerned, playful and smart. Not all humans are fond with them, some are extremely afraid of dogs because they are scared of being bitten or harmed by it.

Veterinarians are doctors of animals and when we hear this word we often think that they chose this profession because they are passionate about the health and condition of animals.

Can you imagine someone who has Cynophobia eventually becomes a doctor of animals? It’s not impracticable because when we give our love freely to our dogs, they pay it back with love as well; suddenly our guards are down and the next thing we know we are so attached to these dogs.

A young woman in this video has Cynophobia, fear of dogs. Every time she passes by the house of her neighbor, a black dog keeps on barking at her which made her more scared. This happened continuously despite the fact that the owner of the dog told her not to be scared because the dog doesn’t bite.

She was extremely afraid of dogs until one day she became their savior! 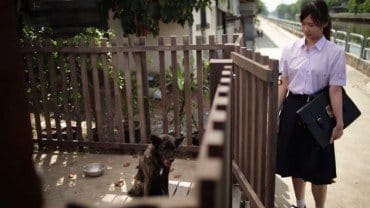 One day, when this young lady is on her way home; she found out that the owner of the dog died. The dog was left with nobody to care for. Although this young woman is afraid of it she tried her best to give the canine food to eat since she worries the dog might die out of hunger.

The dog was saddened by the death of the owner; in fact he looks like he is becoming weak day by day. Thanks to this young woman who gave this dog a hope that someone will still care for him despite being extremely fearful!

As the time passes by the woman and the dog became closer together, she realized that the canine is caring, loving and faithful. She named it Olieng, and finally, she was able to overcome her fear of dogs.

They spent so much time together, the canine follows him most of the time when she was out to do errands or even when she was studying at home. This dog also tried to save their house from burning down. Olieng was always there for her, protecting her and waiting for her whenever she’s not home.

One day, Olieng wasn’t in the place where he used to stay to wait for her. This made this young lady very concerned, until she saw their neighbors circling around her dog. Olieng was hit by a vehicle and was rushed to the veterinary clinic by the young woman. The clinic was closed, Olieng died because of this accident.

Devastated by this incident, the young lady decided to pursue a profession that cares for animals. Soon she became a veterinarian, she did this for Olieng. She keeps Olieng’s memory in her heart and promised to care for animals.

What can you say about this touching stories? Do you have the same experience? Share us your thoughts!