A heartwarming photo of a 101-year-old grandmother holding her two-week-old great-granddaughter goes viral after it was posted on Life of Dad, a social media site for dads.

In the following photo, you will see 101-year-old Rosa Camfield of Gilbert, Arizona as she tenderly holds her great-granddaughter, Kaylee Hamm. Sarah Hamm, Rosa’s granddaughter and Kaylee’s mom, posted the touching photograph on social media. The photo was then shared in Life of Dads, where it quickly went viral.

Patrick Quinn, the founder of Life of Dad, said, “When I posted it, I thought a few of our fans would feel connected to it as I did. Then, within an hour, it was clear that I had underestimated the impact it would have with people as it was shared and liked hundreds of times per minute.“

The video became a hit with netizens, gaining over 80,000 shares and 2.5 million likes within a week after it was posted. 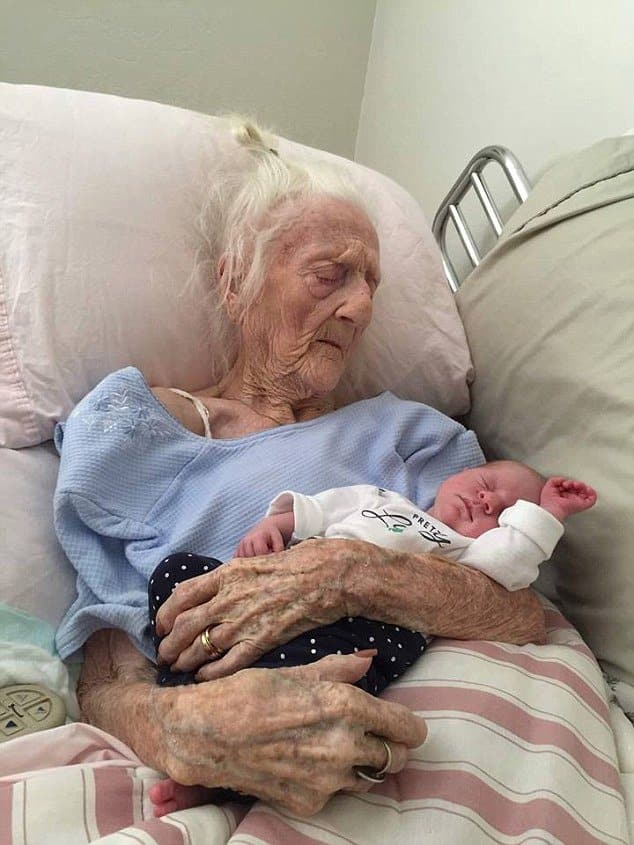 It seemed that a lot of people were deeply moved by the photo, especially because it shows a superb generation gap that spans 101 years. Truly amazing! Not too many people can live that long and be able to hold their great-granddaughter in their arms.

Many even posted photos of their own grandparents holding babies as well, saying they absolutely enjoyed Rosa’s picture.

Sadly, just a week after the photo was taken, grandma Rosa passed away. Still, her memory would live long, not just in the hearts of her own family but in the minds of millions of netizens across the world.