Teaching our kids about the law can never be too early. It is our duty as adults to instruct them about what’s good and what’s bad through our words and example. For a 3-year-old toddler in Canada, his first real life lesson came in sooner than most kids his age.

On Sunday, July 5, the Halifax Regional Police posted a photo on their Facebook page that has gone viral all around the world. The photo features toddler Declan Tramley, who was being given a ticket by Constable Shawn Currie for pulling his red plastic motorbike in a ‘no-parking zone.’

“His dad approached Currie and told him he loves police, and they conspired to give him a ticket for fun,” told Pierre Bourdages, Halifax Regional Police Sgt. to ABC News.

“Remember, no motorcycle parking in the circle by the ferry terminal,” captioned the Halixfax Police Department on their Facebook and Twitter accounts. “This ruthless biker was caught yesterday!” 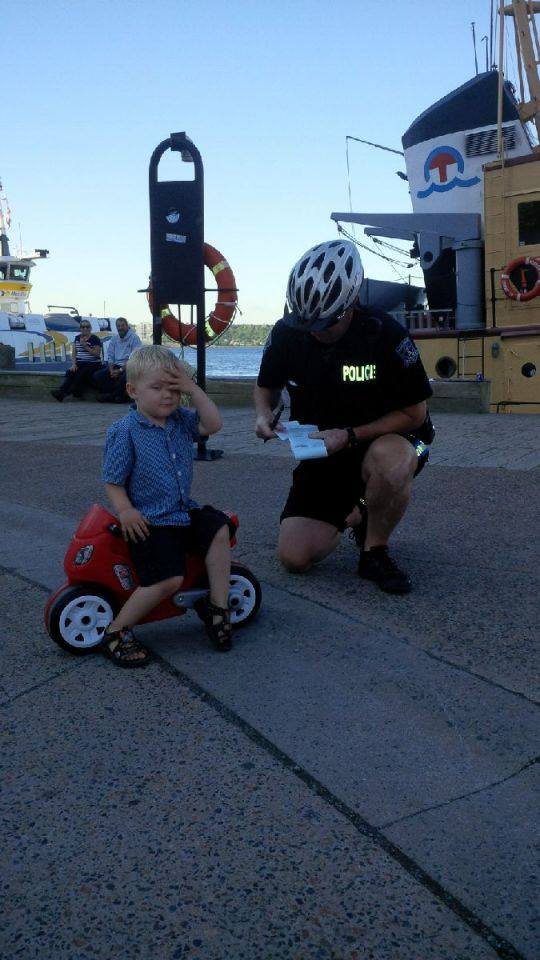 According to Currie, it was nice to exhibit the soft side of the authorities. “We’re not always making arrests and hauling people away,” he told CTV News. “We like to have fun.”

The photograph perfectly captured Declan’s disappointed look with his hand on his forehead and his face looking seriously troubled. We find it too cute! Although he received a ticket from the police, Declan’s mother, Lisa said his kid showed good sportsmanship and that he loves his ticket. He even tried to go to bed with his precious ticket. Adorable!