Theory suggests that when the Big Bang occurred, equal amounts of matter and antimatter were created. However, such matter-antimatter symmetry is being challenged as the amount of matter in the universe is considered to exceed that of antimatter.

We all know that matter is anything that occupies space and has mass. Antimatter, on the other hand, is the counterpart of matter. An atom is composed of a positively-charged nuclei called proton and is orbited by negatively-charged particles called electrons. In the case of the antimatter, it’s the other way around. An atom of an antimatter consists of a negatively-charged nuclei called antiproton and positively-charged electrons called positrons. Now, in spite of being counterparts, matter and antimatter may have a permanent hate-and-only-hate type of relationship, as both will be annihilated once they come in contact with each other and result in the release of a significant amount of energy.

An antihydrogen atom trapped by scientists in 2010. 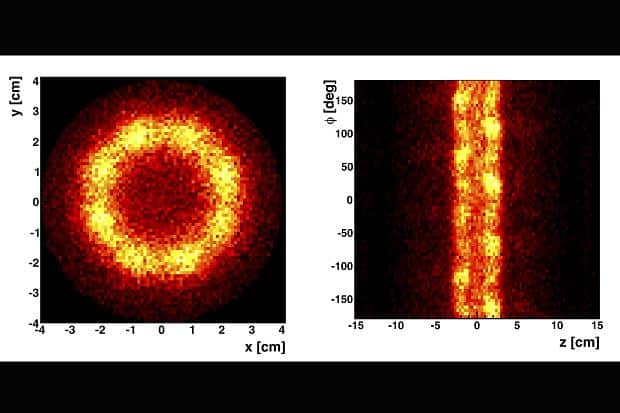 After years of wondering what antimatter looked like, scientists bring us the first glimpse of antimatter, and it looks like any regular matter. The ALPHA experiment, which is based in the European Organization for Nuclear Research or CERN, was aimed at comparing and contrasting matter and antimatter. The recent study, which was published in the journal Nature, might have just achieved the first actual light spectrum comparison of matter and antimatter. This is considered to be a milestone in antimatter research as antimatter is extremely difficult to study for it disappears in a heartbeat. Hence, the research required the use of a far advanced magnetic trap.

Jeffrey Hangst, the spokesperson of the ALPHA experiment, stated:

“Using a laser to observe a transition in antihydrogen and comparing it to hydrogen to see if they obey the same laws of physics has always been a key goal of antimatter research,”

“Moving and trapping antiprotons or positrons is easy because they are charged particles. But when you combine the two you get neutral antihydrogen, which is far more difficult to trap, so we have designed a very special magnetic trap that relies on the fact that antihydrogen is a little bit magnetic.”

The scientists created thousands of antihydrogen atoms, trapped about 14 in each experiment, and targeted a laser beam at the atoms at a precise frequency to successfully measure the interaction of the laser beam and the antihydrogen. The study found that hydrogen and its counterpart antihydrogen had identical light spectrums, with their only difference being the charges of their particles.

The current experiment opens a new door to more research about antimatter and its differences with matter. The researchers hope that they will be able to take more accurate measurements and make more astounding discoveries in the future.