A soon-to-be-married couple in China were sorting pictures to use for their upcoming wedding. Much to their surprise, they found one childhood photo that stood from the rest.

Hedong Zhang and his fiancée found an old picture showing him posing behind Ling Shan Mountain’s Giant Buddha statue taken back in 2000. He was 14 at the time but now his wife-to-be noticed someone familiar in the background – the woman wearing a red coat.

It was her mother.

While digging up childhood photos for the upcoming wedding, a couple in China found this pic taken in 2000.

Mummy Lu was surprised about the discovery and said that, yes, it was indeed her photographed in the background. She eventually dug an old photo of herself taken at the same spot sporting the outfit.

If you will notice, the woman dressed in black can even be seen passing by in the two photos.

Apparently, the then 14-year-old boy stood near his soon-to-be-bride’s mother 15 years before the couple even met. 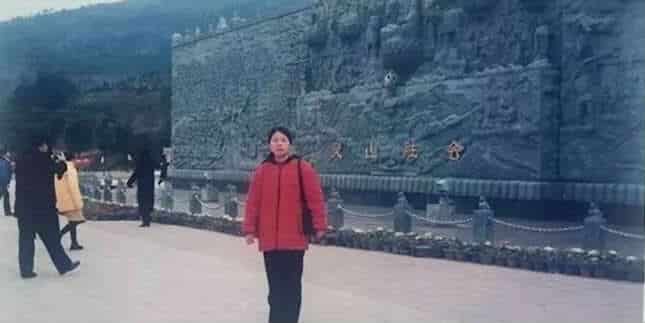 Now what makes this picture particularly special is that it was taken 15 years before the couple even met. Also, it has to be considered both Zhang and his soon-to-be mother-in-law have kept their ticket stubs from the trip which further proved that the dates matched. More than that, they also rode the same bus going to the venue.

As anyone can expect, the couple took the time to share the story with their wedding guests about the now 16-year-old photo. They said they feel that their relationship was indeed destined.

In an interview with Hangzhou Daily, Lu said:

“My husband said, ‘Although we didn’t know each other then, the skies must’ve planned this for us 16 years ahead of time.’ With this incredible story, we’ll cherish our love even more.”

An uncanny coincidence? Or destiny, perhaps? We’ll leave that up for you to decide!