Can you imagine walking in public with a pack of dogs without using any leash? Well, if these were toy dogs, I might dare do that – but we’re talking here about large German shepherd dogs, which are, of course, large and could be terrifying if ever they lunge on someone’s throat. 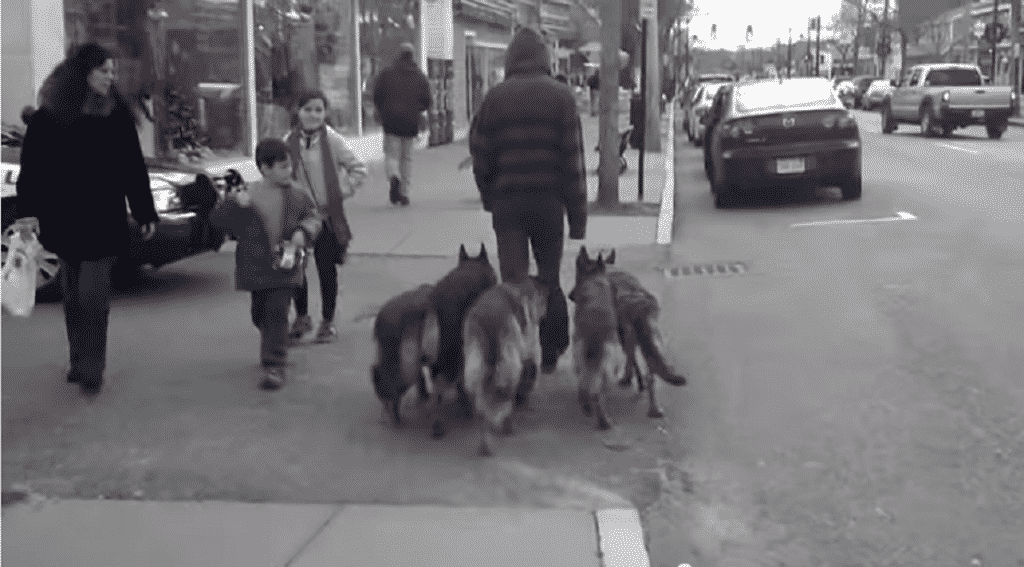 There is one young man whose dogs are so well-trained they do not actually need a leash when they walk in public! That just sounds so crazy but several videos on YouTube prove that this is for real. Is he a ‘dog whisperer’? Or maybe he is a werewolf in man form – but do you think such creature exist?

What is clear to me is that these dogs, knows who’s in command, the leader of the pack. In a street where there are people who could potentially become victims to the dogs’ bites, it is truly hard to have the guts to bring such a large pack if you are not sure about what they would do. Just imagine how hard it would be to get these large dogs off their victim, if they decide to attack!

Of course, this man knew the consequences of such an attack but he was confident enough that his pack will obey his commands. As you can see in the first video below, the dogs are walking close to the man’s heels, keeping up with his pace.

There was never an instance when a dog would run ahead or try to play. They were that disciplined. Even when there were people along the way, including two kids at a crosswalk, the dogs did not pay much attention to them because they were focused on their leader.

The best part was at the last! He commanded them to stop and lie down – they followed! When he walked a few paces away, they did not attempt to follow. He went back to the spot where they stopped and they all quickly got up and followed him again. Awesome!

Walking with a Pack of 5 German Shepherds in Public

Controlling a Pack of 6 German Shepherds

Although the first video went viral, gaining over 8 million views, the viewers were not all impressed by the young man’s skills.

Many are saying he could be using shock collars to scare these dogs into submission. These people believe the dogs were not “well-trained” but were more afraid of getting punished so they are trying their best not to make a mistake or they would pay for it later.

There were many, however, who believe these dogs were truly well trained. The videos were uploaded by user Griffin Shepherd kennels, who has uploaded plenty of other awesome videos featuring several German Shepherds in action, all without leash.

Pack of German Shepherds Having Fun at the Lake

Amazing videos, right? Do you think there’s animal cruelty involved here or is this young man the best dog trainer in the world?