Police and rescuers have a lot of tales to tell about some of the most ridiculous situations they find people in need of rescue.

A man from Pennsylvania just joined the list of those tales when he ended up trapped in an unlikely place at an ungodly hour in the morning. All because he wanted to impress his date.

Police got a 911 call for help at 2 a.m. to rescue a man wedged between two buildings in the downtown Forbes area of Pittsburgh.

Man jumped from one roof to next to impress date @PittPolice helpful in keeping him calm while rescue underway pic.twitter.com/R4OjfvmFQt

The man, a 22-year-old college student named Grant Birdsong, made a daring leap from one tall building to the next one. All in a bid to wow his date.

Unfortunately, his male ego and his supposed parkour skills weren’t sufficient enough to make it across the rooftops. So he fell through the narrow space between both buildings instead.

And ended up stuck between.

Firefighters and public works employees worked for four hours to reach Birdsong, whose gut was apparently a tad too huge to enable him to fit between the structures. Meanwhile, police officers tried to keep the man calm.

Eventually, rescuers had to bring in the heavy equipment to break through one of the building’s thick walls to reach Birdsong.

The destruction of property in an effort to save one foolish human.

Public Works has arrived with heavier equipment to break through the thick walls @PghEMS #teamwork pic.twitter.com/LLHDAaJDXZ

Public works employees gained access to one of the buildings and cut through the brick wall of a restaurant and rescue the stuck Birdsong. They eventually reached him by 6 a.m., and rushed him to the hospital with a broken ankle.

He still managed to wave cheerfully, though. 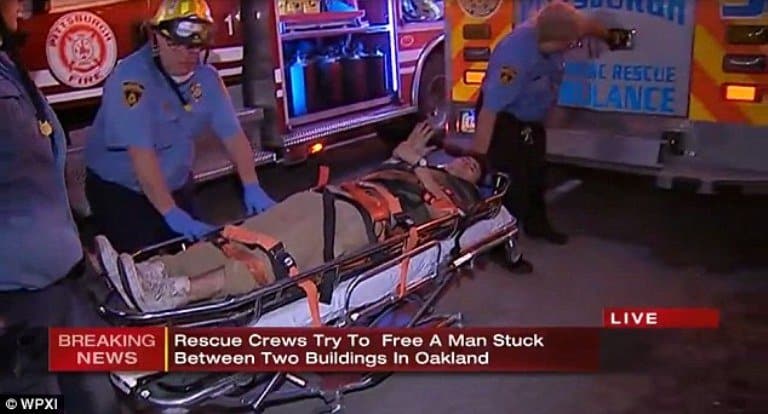 Authorities say Birdsong could face charges for wasting taxpayer’s money, and the rescuers’ time and effort, all in the name of impressing his date.

Not to mention for disrupting the businesses of several establishments that had to close due to the rescue efforts and subsequent damage to property. 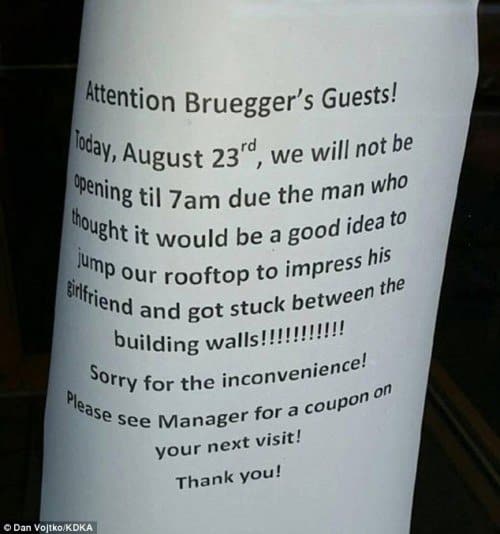 Despite the trouble he caused due to his foolish stunt, it was not clear whether Birdsong did win the girl in the end.

Was all that really worth it?

That is something that we do not know @MetronomeDaBig @PittPolice