What do zoo tigers have for their meal? Apparently in China, they eat a live donkey! This video recently went viral and we see a group of zookeepers pushing a poor donkey into tiger territory.

After dropping in the muddy water, the animal was immediately approached by two tigers. The helpless prey can be seen being mercilessly attacked by the hungry predators.

Raincoat-wearing zookepers pushed this donkey into the water to be devoured by tigers.

One of the tigers wasted no time and hopped on the donkey’s back and then pawed and bit it. Later on, we see the tigers double-teaming the donkey as it struggled and splashed in the water.

The footage is believed to have been taken in a zoo in Changzhou, eastern China. 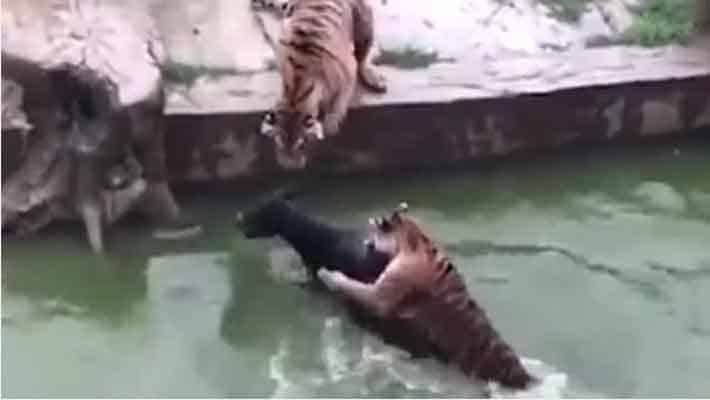 Meanwhile, a DailyMail report tells us that the tigers killed the donkey in about thirty minutes. 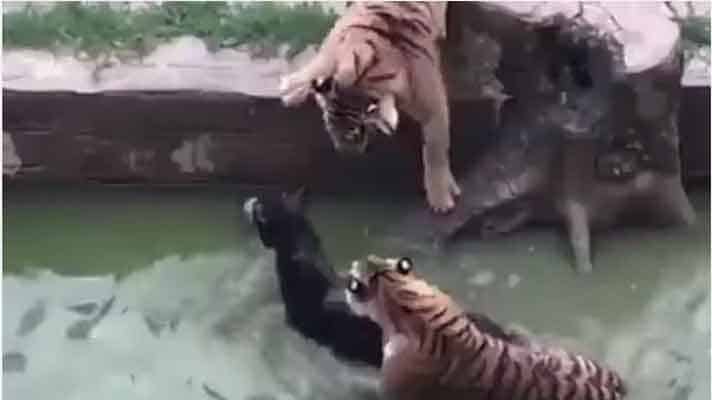 The said footage made rounds on social media and various news sources all over the internet. Generally, the reactions are mixed among netizens with some feeling shocked, condemning the act and calling it animal cruelty. Meanwhile, others are saying it is a natural order of things since tigers are born predators.

“People complain how zoo animals need to be in the wild…and get disgusted and triggered when they do wild animals sh*t.”

“Donkeys get thrown into an enclosure with tigers everyday in the wild? Do the Tigers in a zoo need live food to survive? Do they need live food for entertainment? Not that either of these reasons where why that animal was thrown in.﻿”

Well what do you think about this, our dear readers? Is this acceptable or something truly savage? Do let us know what you think by leaving a comment below.