In February 2013, Samantha Futerman, an actress living in Los Angeles, got a Facebook message from someone she had never spoken to before named Anaïs Bordier, a fashion designer from Paris. Bordier spotted Futerman in some YouTube videos, she sent a Facebook message asking where Futerman was born. As it turns out, the two were born in the same Korean town on the same day, confirming their belief that they were actually related. And though they grew up on different continents speaking different languages, they had managed to find each other thanks to social media. 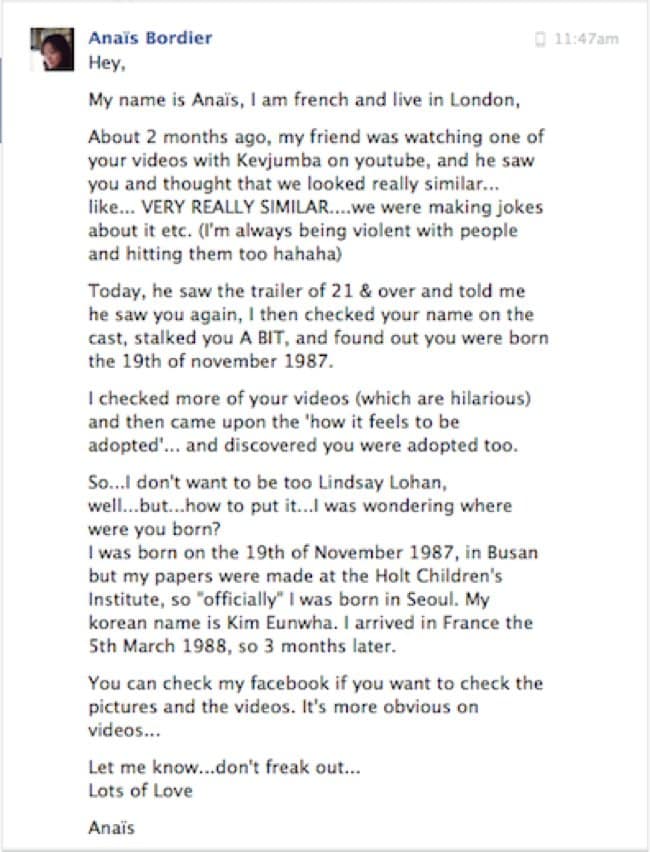 After endless hours of communicating through Skype and mobile, the two finally met in person in May 2013. Samantha and her family went to London to meet Anaïs and her family. A film crew also accompanied them because Samantha and Anaïs decided they wanted to document their story and share it with others.

In the summer of 2013, Anaïs flew to California to visit Samantha and they spent time together visiting Disneyland, Venice beach, and all the other hot spots. A few months later, the twins journeyed to South Korea to find out more about their birth parents. The adoption agency contacted their birth mother, but she chose not to come forward to meet them.

When they were asked what they learned from meeting each other, they both said they had a stronger belief in fate and a broader definition of family. Samantha said, “I know we’ll never be separated again for too long because we’ll never let that happen.” Anais added, “We will be able to meet. We will be able to have fun. We can go on holidays together. We can celebrate at Christmas and continue this life how it should be. Like families.”

Since being reunited, the two have been hard at work at their documentary titled Twinsters which is set to be released in 2015.

Here’s a peek at it.

Anais and Samantha share the same laugh and the same freckled cheeks. They wear their hair the same way and they always have since they were babies. They share a hatred of cooked carrots, a love of the same color nail polish and the need to sleep 10 hours a day. The pair tease, poke and prod each other like they’ve grown up together, but they didn’t. Neither woman knew she had an identical twin sister until less than two years ago. That’s where the power of the Internet, a lot of luck and a series of “what ifs” enter the picture.

Find out more about their story here.