Mother nature holds a lot of mysteries that oftentimes leave us dropping our jaws in awe. How the living creatures observe the food chain to maintain the balance in nature is one of the wonders we witness every day in the wild.

Unlike us people who only need money in order to feed, animals have a very different way on how they can fill their stomach. Animals use strength to fight other animals so they can have something to eat. The stronger devours the weak who end up becoming the prey.

Two animals from the wild battle to death for survival. 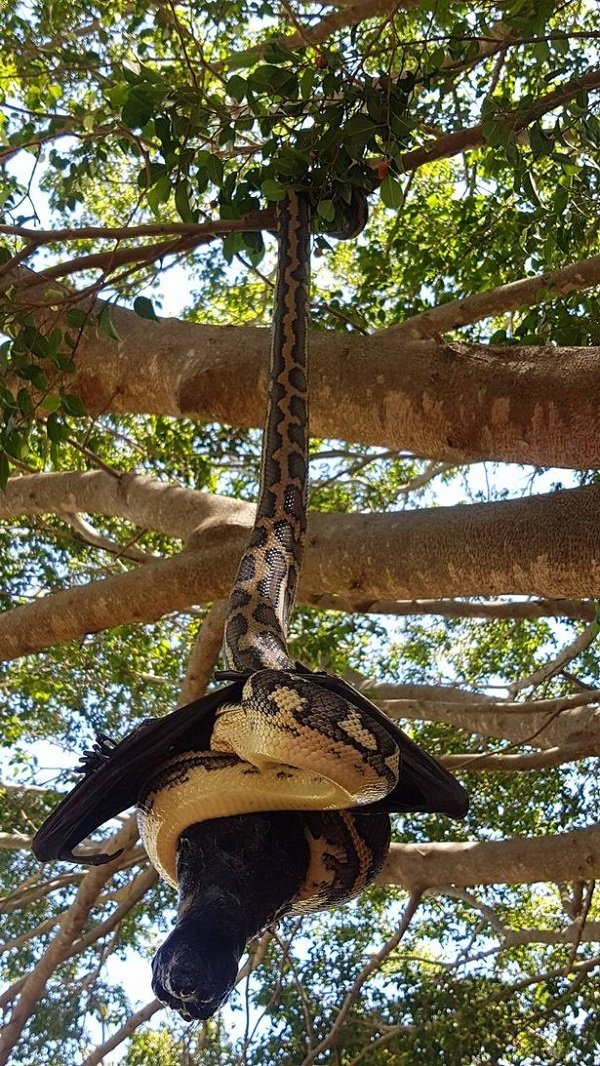 When it comes to catching a meal, we would normally root for the bigger animal and it is obvious why. But like David defeating Goliath with his wit, this bat is never giving up on his life, and he had a smart strategy on how he can make his fight to survive from a python even.

A video shared by a snake catcher features a giant python trying to swallow a bat in whole as the animals fight to death. The stomach-churning footage was captured in Brisbane, Australia, where the bat and python wrestle while hanging from a tree.

The python wraps the giant bat with its body. 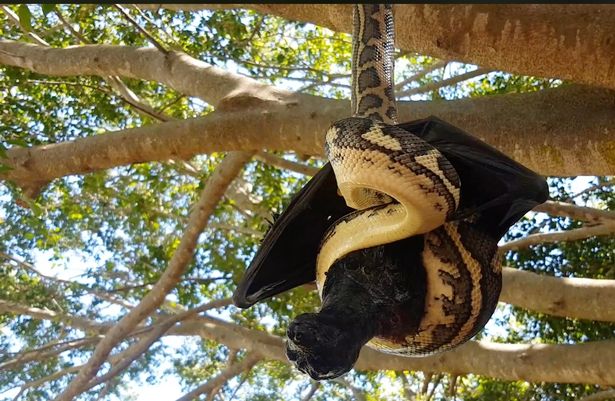 Tony Morrison came across the creatures as they combat each other. He started filming the battle until one of them eventually gave up. The video starts with the carpet python trapping the bat in its grasp.

The two creatures of the wild battled it out for half an hour. Fortunately for the bat, the non-venomous python gave up his meal when it refused to compress its wings, leaving the snake unable to put his prey through its mouth.

However, it fails to wrap its wings, making it difficult to swallow the bat in whole. 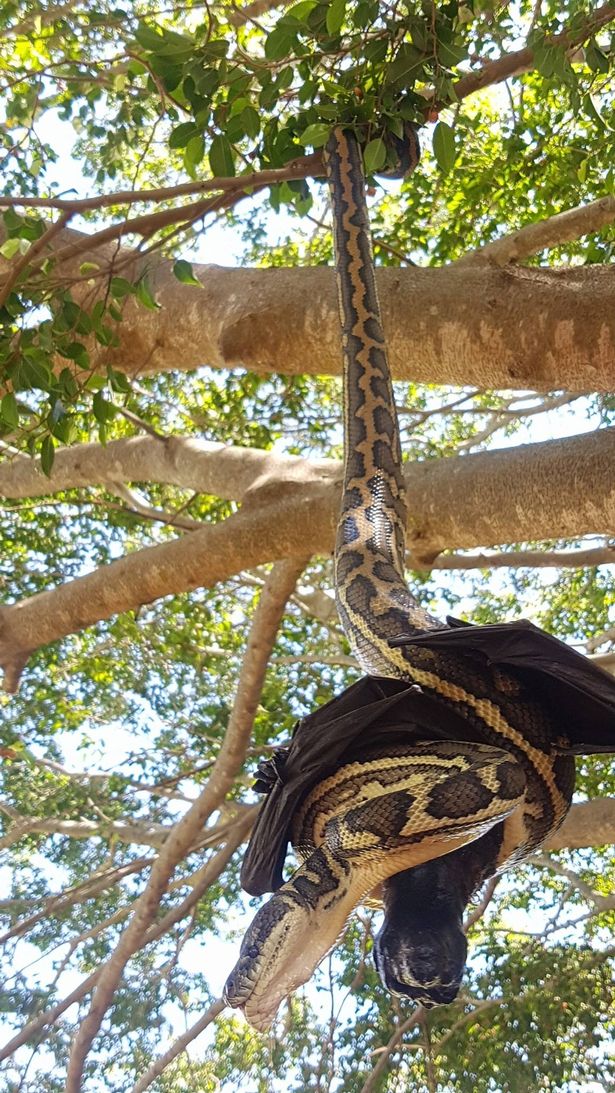 Tony posted the grisly video on his Facebook page, writing:

“This snake could not get past the wings of the bat and decided to give up.”

The python then puts the bat into its mouth. 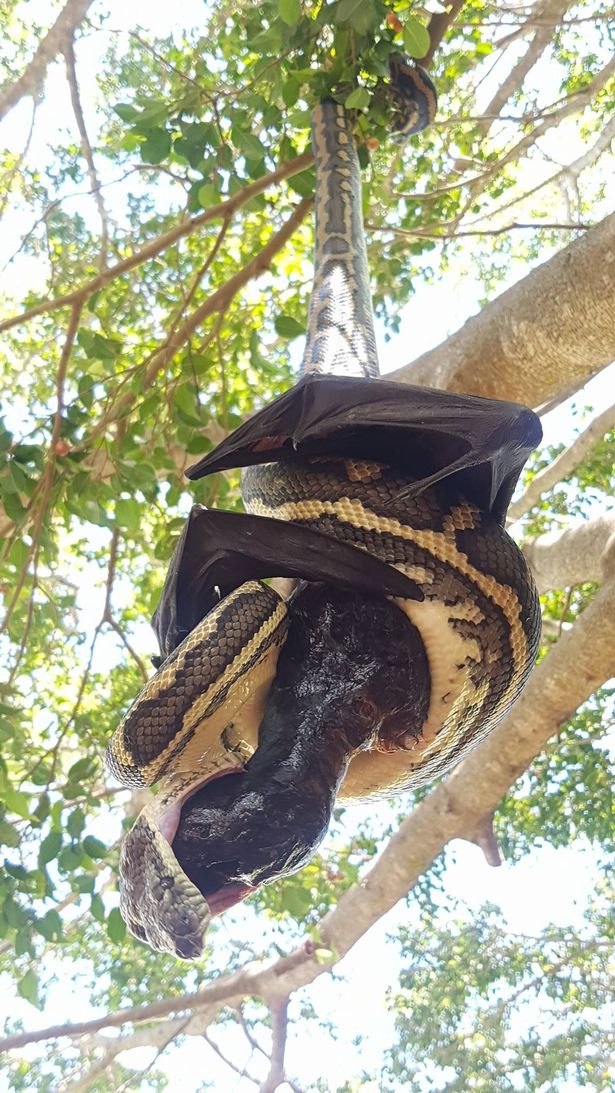 Tony said the snake dropped the bat on the ground when he couldn’t seem to swallow his meal. He also added that it was common to find carpet python in the area and they are not a threat to humans as they are non-venomous. He continued:

“We eventually moved the snake down the road into bushland, because it was in an area where kids would cross to get to school.”

But after over an hour of struggle, the python gave up and dropped the bat into the ground. 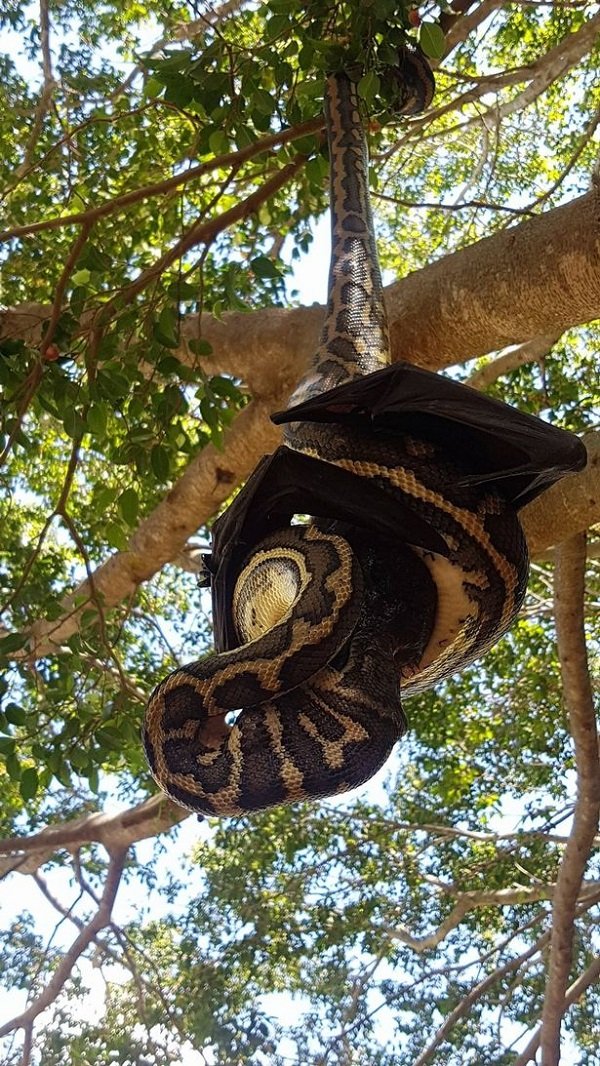 Carpet pythons are often found in trees and shrubs in Brisbane, but they also move around in open areas like the forest floor or on rock faces. It is said that an adult python usually measures 6.6ft but grows to up 13ft in length.

Here is a part of the video recorded by Tony Morrison: