It is the littlest of gestures that count the most. And more often than not, these gestures are those that are unexpected and come from the heart. Media outfit Love What Matters recently posted about an incident that occurred in a McDonalds store in Morrison, Illinois. A local police officer dropped off a homeless man at the fastfood joint, telling him it was a good place to keep himself warm.

Sgt. George Depuy drops off a homeless man at a MccDonalds joint an gives him money for food. 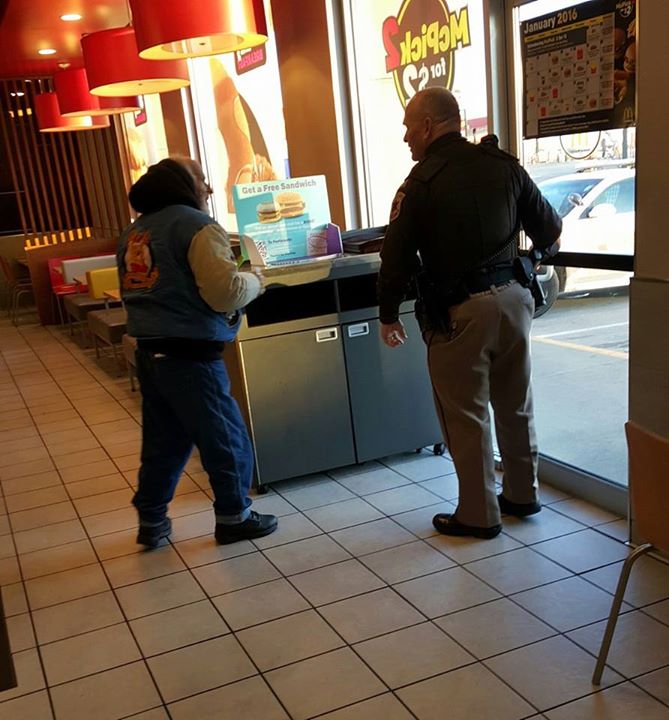 Alex Fischbach observed what had happened and submitted the photo and story to Love What Matters. According to Fischbach, the local cop then insisted that the homeless man take his money and order food for him to eat. In the post, Fischbach mentioned, “He wasn’t looking for any recognition, or any form of gratitude. He did it purely out of the kindness of his heart.”

The name of the local police officer was Sgt. George Depuy, who is a member of the Whiteside Country Sheriff Office. Sgt. Depuy declined to make a comment to the media about the post, but according to a law enforcement spokesman, “He was basically just doing his job and showing that police officers have hearts … it goes on often, but someone caught it which is nice. It’s recognition for doing a good deed.”

"This picture is a quick snap of one of the most beautiful things I've ever seen. We pulled up to the McDonald's in…

Posted by Love What Matters on Wednesday, January 13, 2016

“This picture is a quick snap of one of the most beautiful things I’ve ever seen. We pulled up to the McDonald’s in Morrison, IL and this police officer pulled up next to us in the parking lot. He stepped out of his squad car and opened the back door to let out this homeless man. He walked the man inside and told him this would be a good place to stay warm for now. He walked up to the employee at the counter and explained to her the situation. She was fine with the man staying as long as he needed to. He then handed the homeless man some money from his own pocket and told him to order whatever he’d like.

The man tried to refuse but the officer said, ‘I’m not asking you to take it I’m telling you to take it.’ Nothing else was said after that. The two shook hands and the officer walked out the door. He wasn’t looking for any recognition, or any form of gratitude. He did it purely out of the kindness of his heart. With all the stories out there about how awful law enforcement is, let this be a simple reminder. Not all cops are bad. This man deserves all the praise he can get, so please share this post. Happy New Year everyone, and God bless.”

The post garnered a lot of shares and attention that it helped give the homeless man a new lease on life, according to ABC News. “(A shelter) actually recognized him from the coat he was wearing in the picture,” Fischbach told ABC News. “With everyone sharing the original post, it helped this man be noticed and placed somewhere he could stay.”
We always see posts about bad cops but maybe it’s time we share the good things they do for us, not because it happens to be their job but because they are just genuinely good people who help others.