The French government has just declared a national state of emergency after gun attacks and suicide bombing occurred in different areas in the City of Paris.

The Bataclan Concert Hall is the center of the attacks leaving at least 120 people dead as of writing. Several gunmen held hostages and shot people in the venue before being subdued by the police. Other reported areas of attack include Stade de France, Garde du Nord and Petit Cambodge Restaurant. Shootings and suicide bombing in the other areas mentioned tallied at least 38 deaths, bringing a total of 158 fatalities as of writing.

A map showing some of the attack sites on Paris 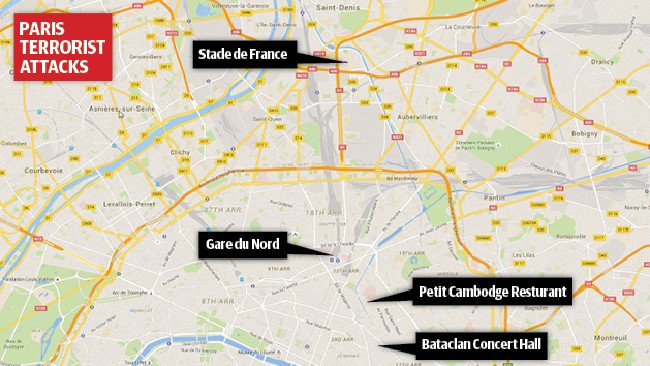 In the aftermath of the attacks in Bataclan, French President Francois Hollande visited the area and reiterated that the event shall not be tolerated by the French government. It will do everything in its power to track the group behind and “will be dealt without mercy for the barbaric act”. At least five gunsmen have been killed by the French military while other involved in the event are still being tracked down. The terrorists were reportedly armed with Kalashnikovs. 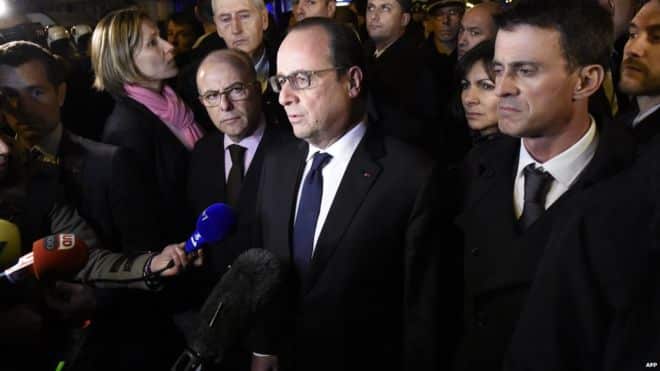 Speculations whether the terrorist group is deployed by the terrorist group ISIS is being explored. Meanwhile, aside from the declaration of state of emergency, France will close all its borders to stop the perpetrators from escaping. It will also implement curfews and schools, commercial areas as well as public transportation has been shut off for a while. Residents were advised not to go outside until situation is regarded as stable. Thousands of the French military have been mobilized and deployed to increase security.

Upon learning of the incident, many world leaders including British Prime Minister David Cameron expressed support saying “We will do everything we can to help”. US President Barack Obama also regarded the incident as “an outrageous attempt to terrorize innocent civilians”.

Let us all hope that justice can be served for the hundreds of innocent lives taken by this bloody and inhumane carnage in Paris.

For some pictures of the event, please check the next page.