An average child would probably throw tantrums when his mom or dad couldn’t buy the toy he or she likes. A 10-year-old boy in Liverpool, England desperately wanted a stuffed Panda he saw at an Asda supermarket, the British equivalent of Wal-Mart. When his mom said she couldn’t afford to buy the toy, Leon Ashworth wrote a note on the toy’s box pleading with shoppers not to buy it until his mom could.

The next thing that happened will make your heart melt. As the stuffed animal was the last one left on the shelves, Leon decided to hide the Panda in an empty cardboard box and left a note for other shoppers. 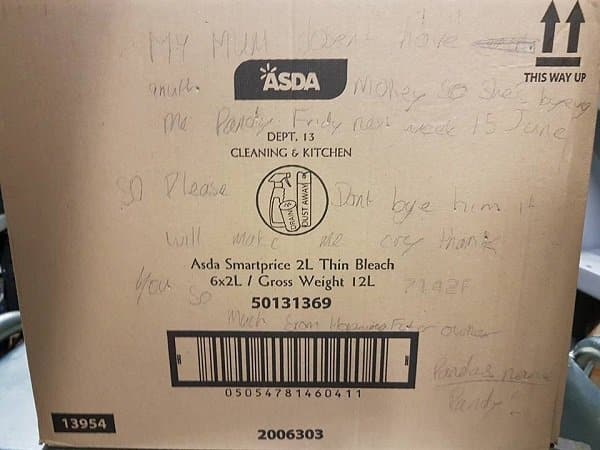 “My mum doesn’t have anuff money, so she’s byeng me Pandy next week 15 June. So please don’t bye him it will make me cry – thank you so much from his hopeful future owner. Panda’s name is Pandy…”

Meet Pandy, the stuffed Panda Leon wanted but his mom couldn't afford it. 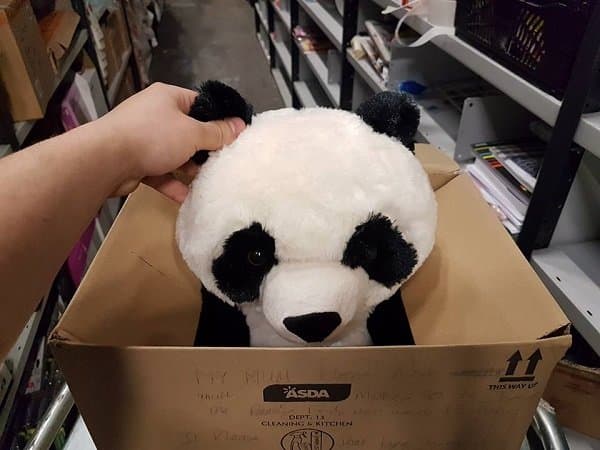 Debbie, the boy’s mother, could not afford the Panda, which costs £15 ($19.51) because it was a few days before she’s due to get paid, reports Metro. She works as an intensive care unit nurse at the Liverpool Heart and Chest Hospital.

He took the stuffed animal and hid it in a box with a note pleading other buyers not to purchase it. 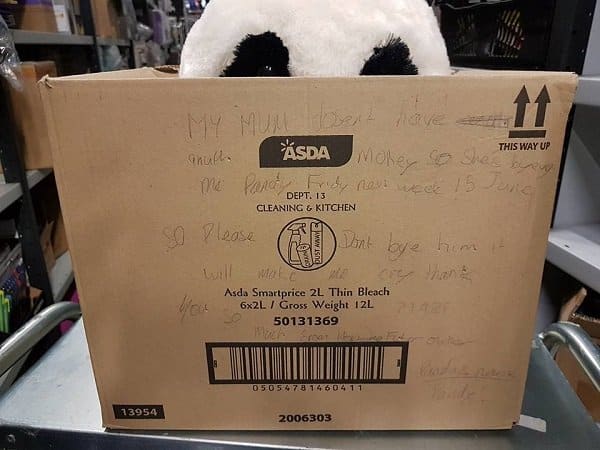 Though Leon is willing to wait until his mom can afford Pandy, the staff at Asda decided to buy the stuffed animal for him. The staff’s thoughtful gesture went viral on Facebook after David Bateman, one of the Asda workers, wrote an appeal to track down Leon.

David Bateman, an Asda worker posted on Facebook to track Leon after they chipped in to buy Pandy for the boy. 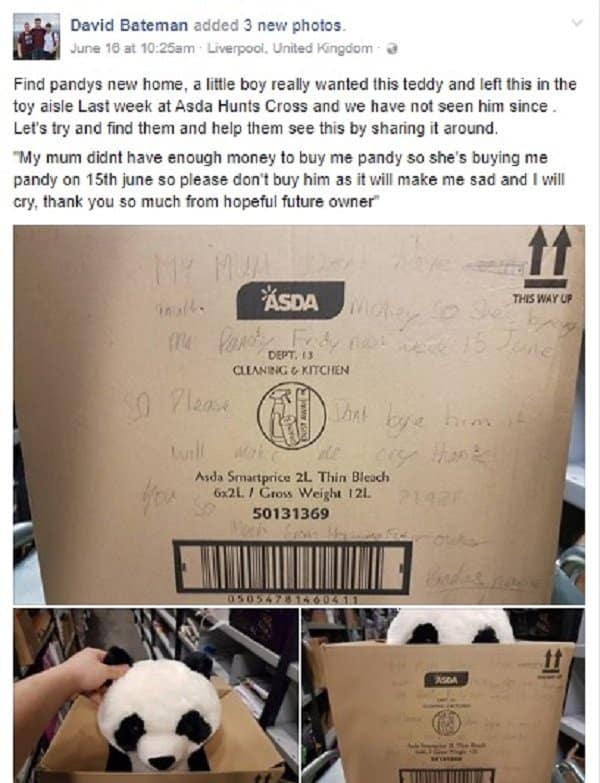 After the photo was shared more than a hundred times, Debbie spotted the post and went back to the store with Leon. The boy couldn’t hide his joy and excitement as the staff handed him his Panda stuffed toy.

“I didn’t think much more about it, and I just thought someone would take it out of the box and put it back on sale.

“A few days later I was flicking through Facebook – I hadn’t realized until then what Leon had written – he’d really poured his heart and soul into his message! ” she added.

When Debbie and Leon went back to the store, David was not there. So, his co-workers Kelly McEvatt and Amy Lindsay happily handed over the toy to Leon, Asda reported.

Leon finally got Pandy, can you see how happy he is?

“Debbie said ‘I’ve come in to pick up my son’s panda!’. The moment I handed the panda over was brilliant – to see Leon’s face was just wonderful. It’s the best moment I’ve had working here,” Kelly said.

They boy was thrilled to take Pandy home.

“As he was walking out he said to me ‘This is the best day of my life.’ It meant the world to him,” Debbie added.

It is amazing how even a small and kind gesture from other people would mean so much for those they helped. Debbie lost Leon’s youngest brother, Oliver, just a few days after he was born prematurely. Leon has two other siblings, Troy, who is 11 years old and Jennifer, who’s 7.

“In January my son Oliver was born prematurely and passed away four days later so it’s been a really tough, difficult time for all of the family, especially the children who were so involved in the lead-up to the birth. It’s amazing how big a difference little gestures like this can make, and Leon is so happy,” Debbie said.

Leon has decided to donate £15 of his pocket money to the Honeysuckle Bereavement Service. It’s an organization that gives support to families who lost a baby.