Apart from throwing rancid insults towards his opponents, 2016 U.S. Presidential Candidate Donald Trump has been announcing several controversial policies to the public including closing down mosques. It seems that the billionaire has been taking advantage of the people’s distrust of Islam and fear of terrorists’ attacks to gain America’s votes come next year’s election.

In an interview with NBC news on Thursday night, the Republican frontrunner made another contentious remark. According to Trump, he “would certainly implement” a database system to track all Muslims in the country.

We better get tough with RADICAL ISLAMIC TERRORISTS, and get tough now, or the life and safety of our wonderful country will be in jeopardy!

And when asked whether they (Muslims) would be legally obligated to register in the database he answered, “They have to be—they have to be.”

Unsurprisingly, Trump’s ridiculous comment enraged many people. But, to show how a young American Muslim named Marwa Balkar opposes the candidate’s plans, she responds to Trump’s threat by posting a picture of herself wearing a peace sign as an ID badge and writing this message: 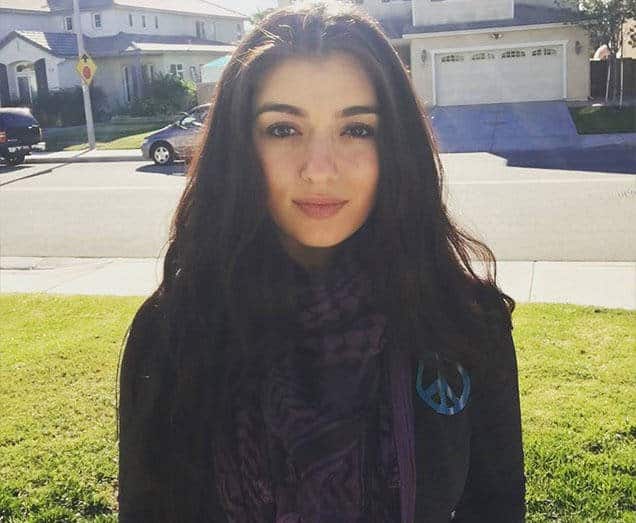 “Dear @realdonaldtrump, My name is Marwa, and I am a Muslim. I heard you wanted us to start wearing ID badges, so I decided to choose one for myself. I am not easily identifiable as a ‪#‎Muslim just by looking at me, so my new badge will let me display proudly who I am. I chose the peace sign because it represents my ‪#‎Islam. The one that taught me to oppose ‪#‎injustice and yearn for ‪#‎unity. The one that taught me that killing one innocent life is equivalent to killing humanity.”

“I heard you want to track us as well. Great! You can come with me on my Cancer Awareness walks at the local middle school, or you can follow me to work where it’s my job to create happiness. You can also see how my local mosque makes PB&J sandwiches for the homeless and hosts interfaith dinners where everyone is welcome. Maybe then you’ll see that me being Muslim doesn’t make me any less American than you are. Maybe if you walk in my footsteps, you can see that I am not any less human than you are.”

At the end of her post, Marwa wrote “Salaamu Alaikum” which means “peace be with you.”

In just four days, her post got approximately half a million likes from netizens including one from Facebook CEO and founder Mark Zuckerberg. And her gesture created a ripple amongst other Americans who have sent their “ID cards” with the hashtag #MuslimID.

Hey, @realDonaldTrump: my #MuslimID is the diplomatic passport I used to proudly represent the US around the world pic.twitter.com/mcQBaoax70

.@realDonaldTrump This is my grandfather's American #MuslimID from @NASA – dated July 1969. Where's yours? pic.twitter.com/ztegh1uhQO

The posts came from honourable Muslim men and women who make or have made significant contributions to the world.

Hey @realDonaldTrump, here is my #MuslimID. Proudly working at the @UN to help address dire needs of the world. pic.twitter.com/qQbPxgTNAA

On Friday, Trump tweeted that the NBC reporter raised the idea of a database. Corey Lewandowski, his campaign manager said that the reporter asked leading questions under “blaring music”. What Trump had in mind, he claimed, is a terrorist watch list and not a registry of Muslims. Still, Trump seemed to be in favour of the idea.

I didn't suggest a database-a reporter did. We must defeat Islamic terrorism & have surveillance, including a watch list, to protect America

Do you think Americans need a leader like Donald Trump? Would you vote for him? Share your thoughts in the comments section below.