Fashion and utility collide in Balenciaga’s newly released embossed leather skirt, which most people think looks like a car mat. People are laughing hard at this new creation of the famous clothing and accessory brand as it sells the skirt at a ridiculously expensive price when they claim they can buy it at the auto accessory shop for less than $50!

Designer items are such a luxury, where some people think they are just a waste of money. But despite the thousands of dollars we spend on signature bags, shoes or clothes, we still ought to drain our accounts just to own a piece. If you come to think of it, the price might actually be reasonable as branded items have the highest quality in the market and their designs are – well, supposedly – incomparable!

Behold Balenciga’s newest skirt that had the Twitter world laughing. 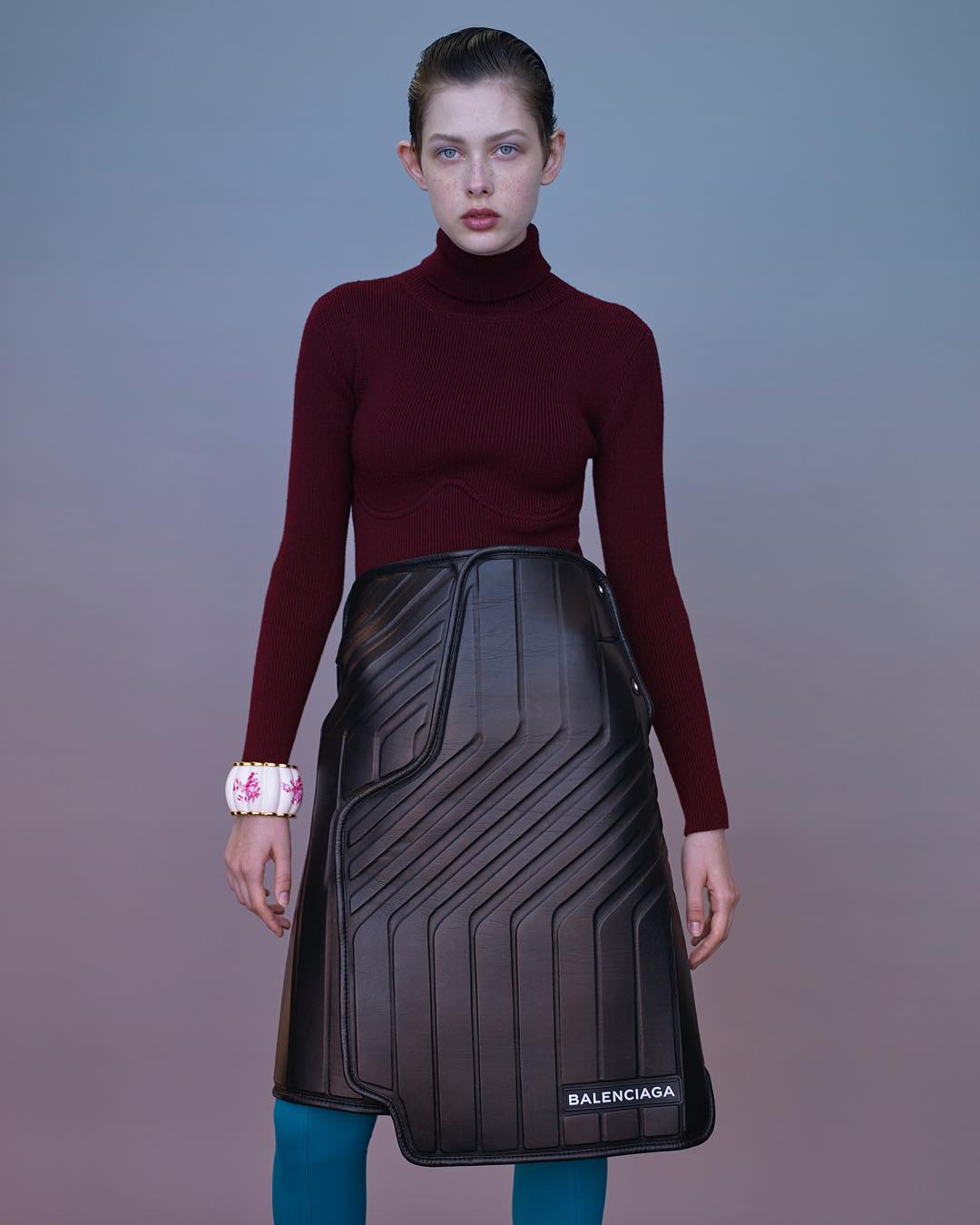 Balenciaga is swaying from this norm though. While nobody ever thought of turning a car mat into a skirt, well, Balenciaga is imaginative enough to be the first one to come up with the idea. And for a car carpet protector sewed with buttons and zipper, this skirt is too expensive at £1,795 ($2,365).

The world’s most talked about skirt today was first seen on the runway during Balenciaga’s autumn/winter 2017 fashion show. It comes in other colors too which are more decently-looking than the black variant.

Twitter users compare the skirt to a car mat, and it is obvious why. Here are some of the funny comments they made on the expensive Balenciaga item. 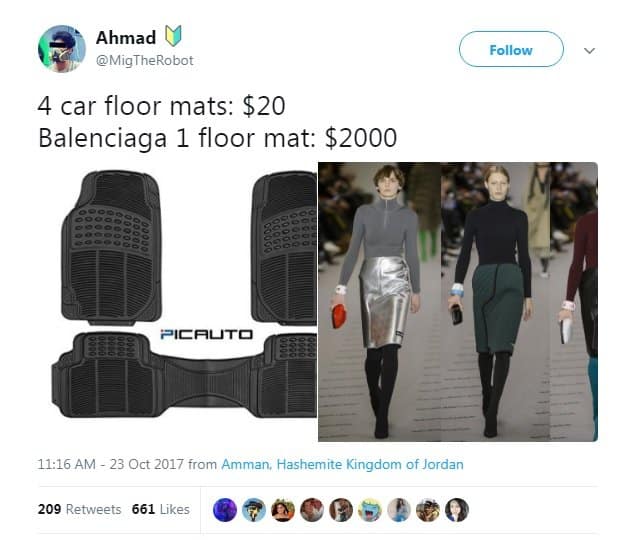 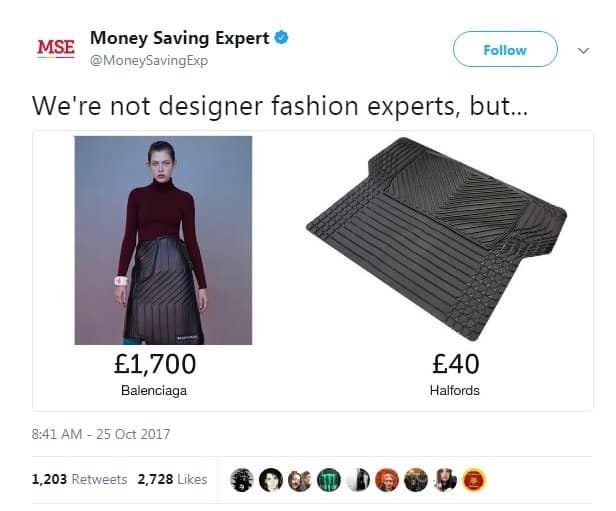 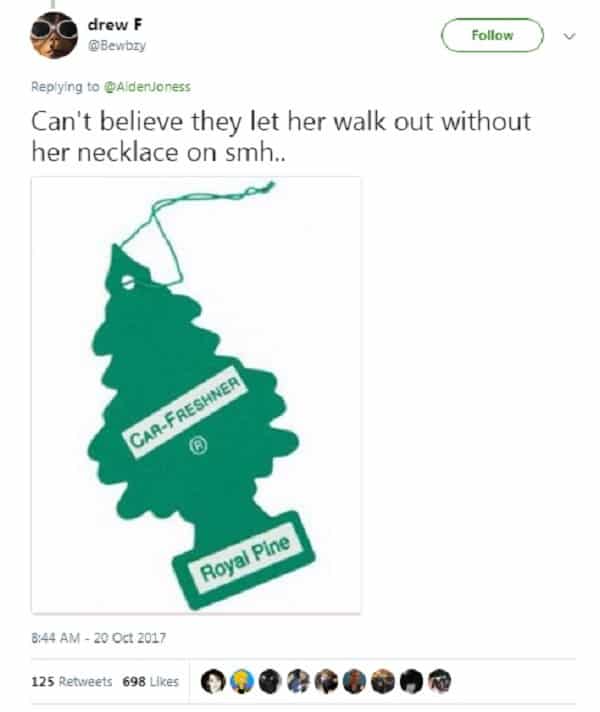 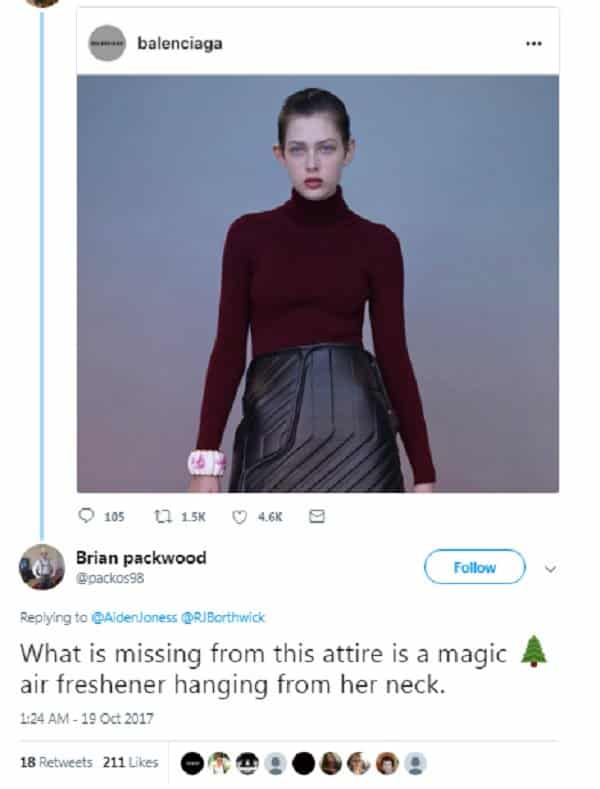 People are rolling their eyeballs on this knee-length skirt and memes of it are everywhere on social media platforms. After Balenciaga released a $2000 worth blue bag which shows a striking resemblance to IKEA’s $0.99 fashion bag earlier this year, people just can’t stop themselves from commenting on this new fashion item again.

There are some business enthusiasts out there though who defended Balenciaga’s new skirt saying it was meant to start talks as a part of their marketing strategy. However, the brand cannot fool the netizens again with most criticizing the collection and deeming the skirt as a “big joke.”