A heartbreaking video of a middle school student named Keaton Jones has spread like wildfire on social media. The young boy was in tears as he talked about his tormenting experience as a bully victim in school. While the video was initially taken as an eye-opening message on one of the biggest issues faced by many kids today, it has now been shrouded in scandal with several people claiming Keaton is simply used as a tool for a big scam.

A couple of days ago, the world came to know the boy who pleaded bullies to stop criticizing him through a video that his mother, Kimberly, posted on Facebook. He asked, while sobbing, “Just out of curiosity, why do they bully?” He continued to share his disappointment asking, “What’s the point of it? Why do you find joy in taking innocent people and finding a way to be mean to them? It’s not okay”.

A video of Keaton Jones pleading for bullies to stop harassing him has gone viral on Facebook. 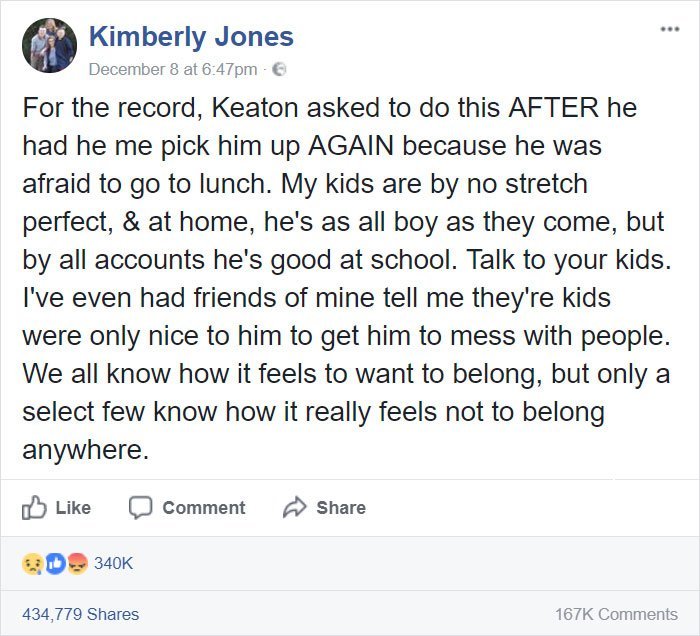 The young boy continued to reveal the difficult situation that victims of bullying are experiencing. He said bullies at school call him ugly and that sometimes, the encounter becomes physical. He alleged that his bullies had poured milk on him and shoved ham down his clothes. Keaton expressed how miserable it is to experience such treatment, saying:

“I don’t like that they do it to me. People that are different don’t need to be criticized about it. It’s not their fault.”

According to Kimberly, the video was recorded when she picked up Keaton to avoid bullies during lunchtime. It was then posted on social media where over 20 million users listened to Keaton’s sentiments.

The video about bullying has gone viral that it even caught the attention of multiple celebrities, athletes and even public figures who later rallied on Twitter and Instagram to support Keaton. In fact, the video was so compelling that Chris Evans invited the Tennessee boy to the “Avengers: Infinity War.”

Hailee Steinfeld invited Keaton to escort her at the premiere of “Pitch Perfect 3.” The quarterback Jarrett Guarantano met up with the boy and ended the day calling him his “new best bud.” On the other hand, Katy Perry, Demi Lovato, Mark Hamill, Millie Bobby Brown, Gal Gadot, and Snoop Dogg among many others expressed their support through empowering tweets. Here are just some of the messages posted online to support Keaton: 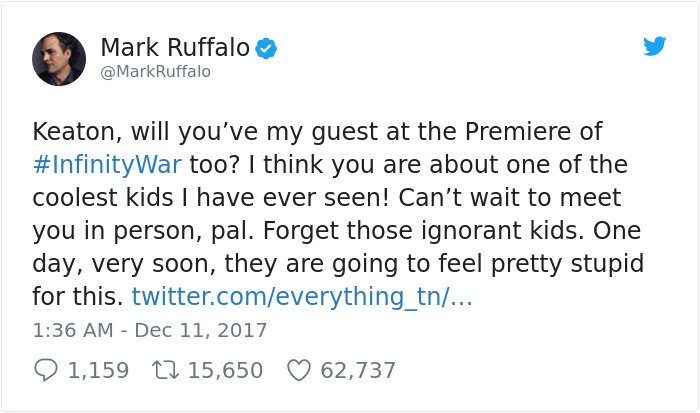 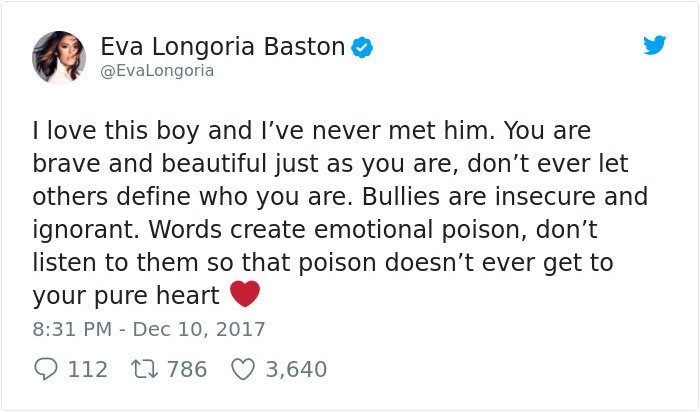 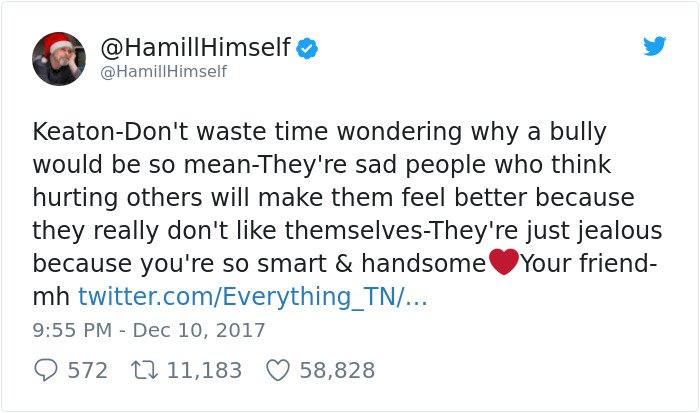 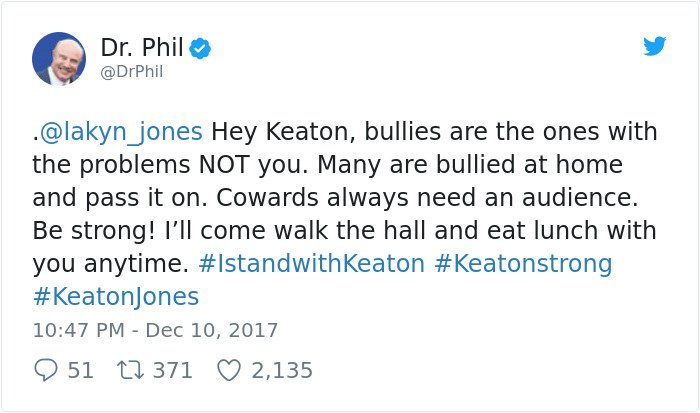 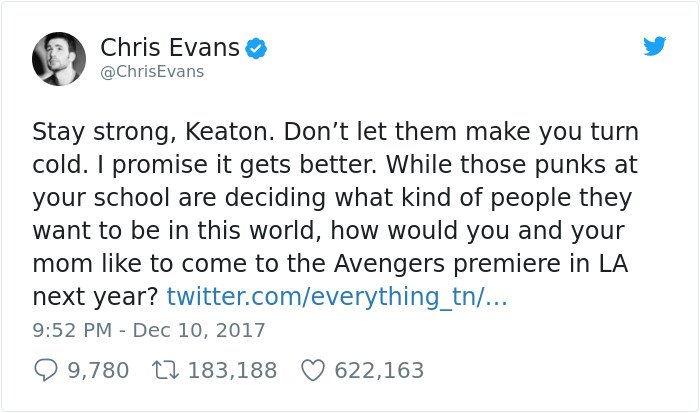 It didn’t take long until the mother and son duo received a massive backlash. As nothing can be kept hidden on social media, a couple of netizens found posts by Kimberly Jones that entirely disputed their concerns on bullying.

Some net detectives uncovered posts of Kimberly that are apparently racist. This has sparked countless speculations including a rumor that Keaton was being bullied because he called other kids in school racial slurs.

Many people then labeled Kimberly a hypocrite. Slink Johnson caught wind of the controversy and commented on Twitter:

“My heart goes out to anyone dealing with bullying, but wassup with the racist images on Keaton Jones’ mom’s facebook page? Wouldn’t that kinda make her a bully too?”

A bigger issue comes from the revelation of MMA fighter Joe Schilling who reportedly contacted Kimberly Jones on Instagram. The athlete said he invited Keaton with good intentions to one of his shows only to be turned down through a disappointing response. He posted a video on IG to share the story of his conversation with Kimberly, captioning it with:

“Go look at her ig watch her story posts she just running a money scam. Really really sad and disgusting. Tagging celebrities trying to get them to donate to her go fund me account smfh.”

In the video, Joe says he feels “pretty stupid right now.” He continued:

“I was pretty moved by Keaton Jones video so I reached out to his mom and was going to bring him out to LA for a Bellator event that’s coming up, big show, and and introduce him to fighters, be his friend, and she just wants money. She just wants me to share her GoFund Me account.”

When Schilling asked what the GoFundMe account was for, she replied, “You know Christmas is coming and I’m a single mother, blah, blah, money’s tight.”

The GoFundMe account set up under Kimberly Jones’ named received a total of $58,000 in donations. But due to the recent controversy, the account has been suspended. The media tried to contact Kimberly via Instagram and she denied the claims made by Joe Schilling saying his accusations were “untrue.” Her message continued:

“I did not tell him that I would rather have donations instead of the help from celebrities.”

Kimberly also took down her Facebook page but she has not given a clear reason as to why she did. According to a report, Kimberly previously posted a message on her Instagram account to defend her family amid the rumors. She wrote:

“I love my kids: Ya’ll people do not know me or my family. Did y’all know that my son Keaton was spit on in school, picked on by teachers, that supposed to be there for him??? I’m guessing y’all didn’t because y’all wanna steady Judge me and say I’m using him for money that’s false.”

So here is the video of Keaton Jones sending a message to his bullies.

And here is the video of Joe Schilling saying Kimberly Jones is just using her son to stage a scam.

Here is another video that surfaced on social media criticizing Keaton’s mother.

This is in response to my offering Saturday night regarding #keatonjones #bullying which touched a nation and in a fit of happiness the world was good. If what I’m hearing about his mother’s #racism is true-shame on you #KimberlyJones I’m still #KeatonStrong but #racism isn’t on pic.twitter.com/eFj2AmK0Rp

Some were quick to defend the kid and continue to express support like these people:

But amid the controversies, some were thankful that the video raised awareness on such a serious social issue. 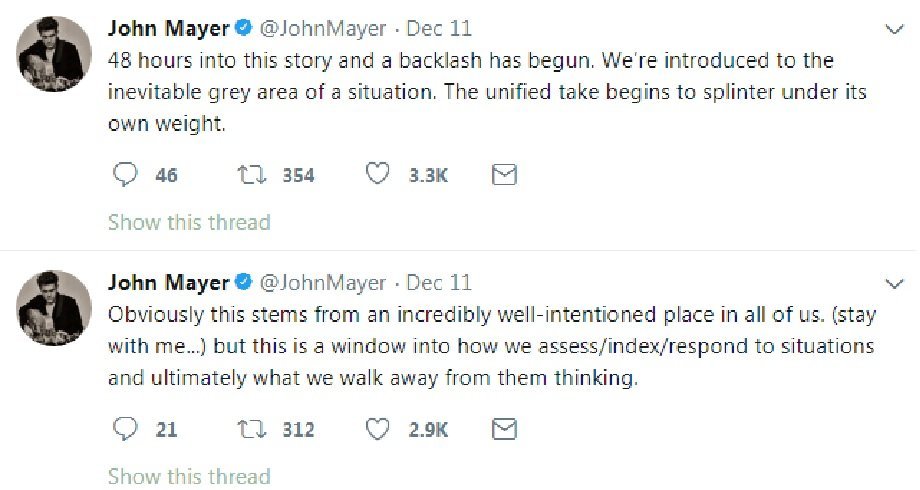