There are various reasons why people choose to build statues. For the most part, they’re there to serve as a symbol to commemorate a historic or iconic person. Others see them as means to bring good fortune or luck. For whatever purpose they may serve, we can all agree that these statues fascinate us in some way or another.

Interestingly, a good number of statues somehow promote “sexuality” and so people or tourists just couldn’t help but touch them, for obvious reasons.

Without further ado, below are 10 statues from across the globe that people are fond of touching in inappropriate places. 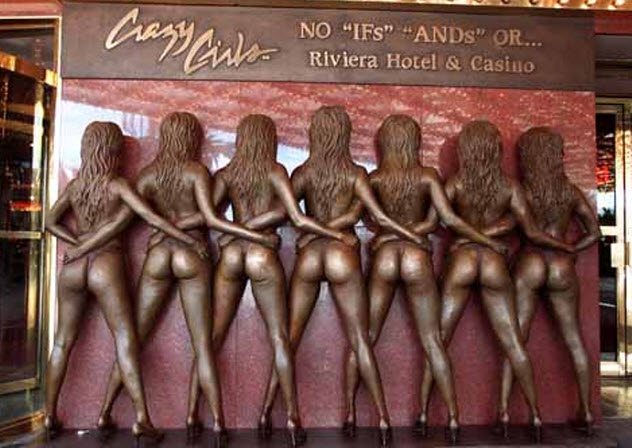 This one here isn’t surprising really. Nicknamed Sin City, Las Vegas has a lot of lewd things to offer. And yes, the Crazy Girls statue is just one of them. It depicts a row of women all standing arm in arm with their backs facing the crowd and well, their rear ends visibly prominent. Whenever people visit the site, they tend to touch these bumps or take photos with them. The Crazy Girls were actually a live show from 28 years ago and it was performed in Riviera Hotel and Casino. But as soon as the property closed in 2015, the statue was moved to Planet Hollywood. 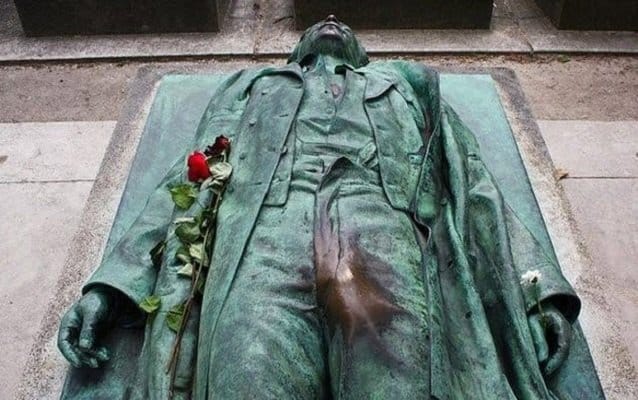 Victor Noir is basically a statue of a man in a graveyard. But apart from paying respects, tourists usually like to poke fun with it. Noir was known for being a political journalists, but his stunts caused him his life. He got shot by Prince Pierre Bonaparte in 1870. His death held him as a martyr, with over 100,000 people attending his funeral. The statue, in particular, depicts him lying on the ground. But what will catch the attention of visitors is his bulge. Many believe that by touching it, infertility will be prevented. Hence tons of women around the world would flock there and touch his “thing.” 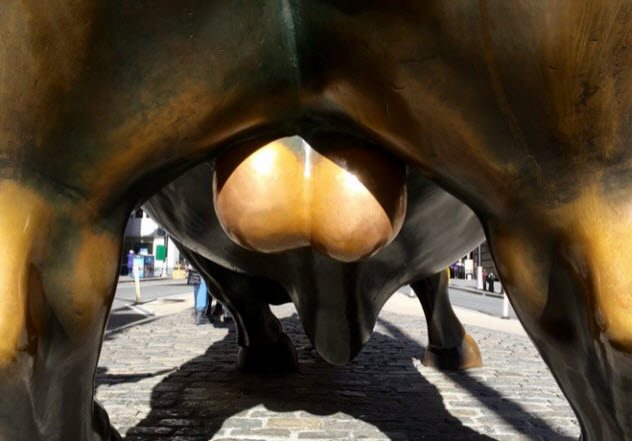 The statue is massive one, weighing around 3,200 kgs. It first arrived in the Big Apple sometime in December 1989, though it was meant to be a display for a certain Christmas event in the city. But when authorities took it away, the residents started to complain. Hence The Charging Bull was eventually reinstalled.

According to stories, rubbing the bull’s testicles will bring good luck. It’s why the number of touches it received resulted to a different color. Many believe that the bull itself symbolizes the financial wealth of the city and, thus, many would pay their respects to it. 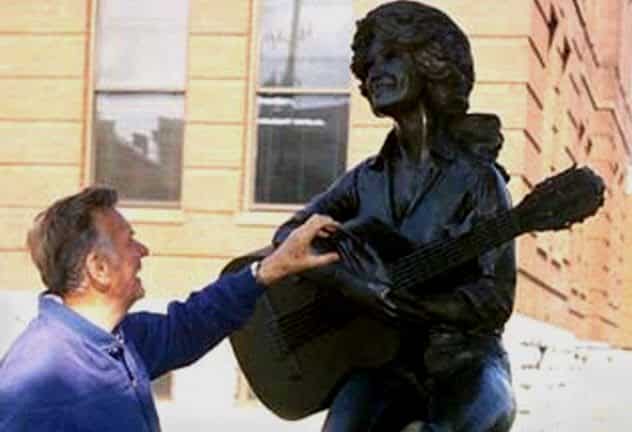 Dolly Parton’s statue can be seen just in front of the Sevier County Courthouse. Parton was among the famous country singers. The statue finds her sitting on a rock and playing her favorite musical instrument: the guitar. The very location of the statue was Parton’s home. The residents wanted to pay tribute to Dolly and her career, thus they opted to erect a statue. The left breast of the effigy, albeit covered, is a tourist-favorite. People would touch it from time to time, believing that it would bring them luck and love. 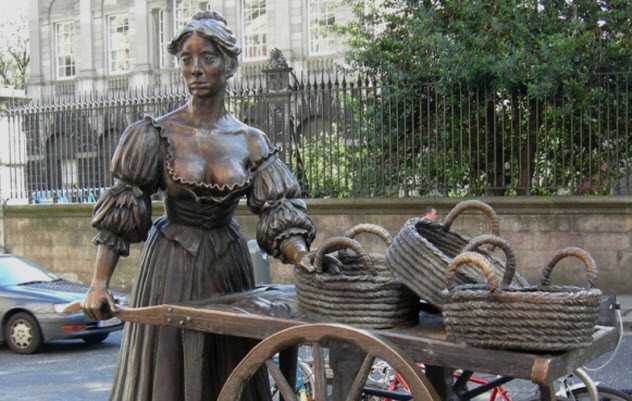 Whenever the name Molly Malone comes up, it’s a crime not to think of Ireland. Malone’s lovely statue can be seen in the very heart of the capital city of Dublin, particularly in Suffolk Street. Its original location was in Grafton Street, but was moved as the city needed to conduct reconstructions and beautifications. Tourists have fascination over the statue’s breasts, which are bulging. The different shade of brown proves that people have been touching them over the years. Others believe that touching the breasts would bring good luck. There are those, however, who simply touch them because they’re, well, noticeable. 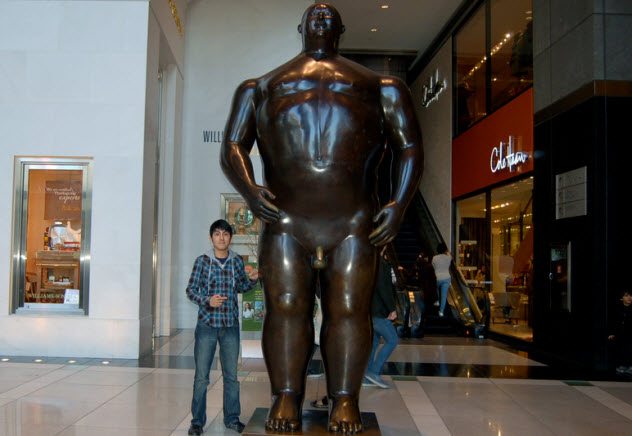 This statue is erected inside one of the shopping centers in New York City. There are actually two of them, with one being the Eve statue. The Adam statue, in particular, stands 3.7 meters tall, and have become a tourist attraction. Well, there’s really a good reason why it’s more famous than the Eve statue. As you can see, his “manliness” is well-shown. People would love to stop by and touch the private parts. And believe it or not, all the touching gave the “member” a gold color. Same as Malone’s statue, there’s no legend or luck associated to it. It seems people just love to touch it. 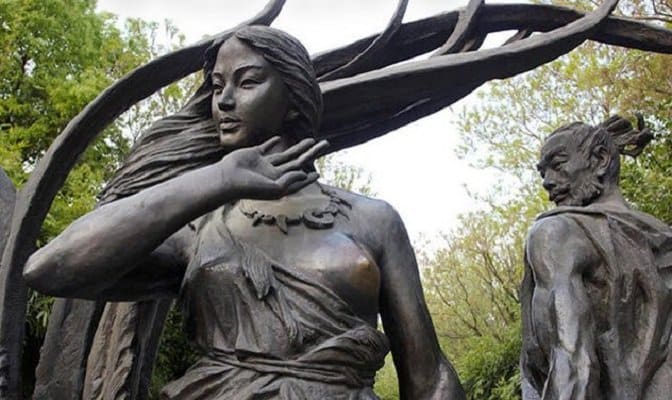 This one here stands holding hands with another statue, which is actually the effigy of Yu the Great. The latter was known as the founder of China’s first dynasty back in the year 2070 BC. His wife’s statue shows an exposed breast. And this is exactly why people who pass by seem to enjoy seeing the statue. Unfortunately, the touching resulted to the figure’s wearing down and discoloring. Hence the government started to implement actions, as they believe it to be disrespect to their culture and ancestors. 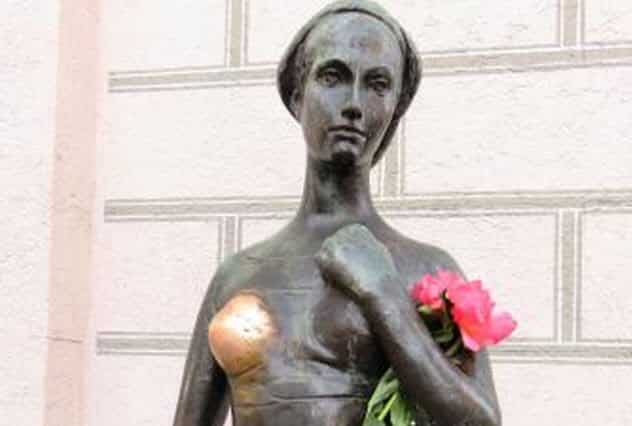 Of course, who wouldn’t want to see and touch the Juliet statue in the lovely town of Munich? After all, it was named after the one of the most popular characters from the famous love story Romeo and Juliet. Interestingly, the statue in Munich has a twin in Italy. According to Listverse, it was given to city by the government of Verona, Italy. But instead of giving and/or placing flowers, people would rather touch her private parts. The discoloration is a proof of that. In fact, the statue from Verona was taken down after the damages caused by people touching it. 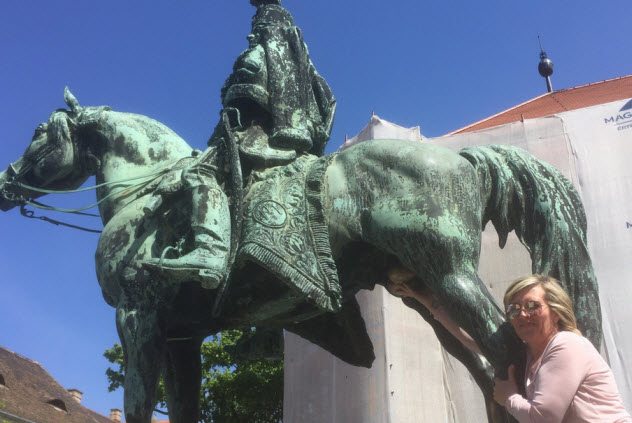 Andras Hadik was deemed one of the famous hussar from Hungary. Meaning to say, he was among the go-to guys from the Hungarian army. He was indeed a remarkable soldier, gaining the highest rank in the unit in Austria-Hungary during the infamous Seven Year’s war. To commemorate and honor his legacy, the country’s government decided to erect a statue of him. The statue depicts Hadik riding a horse, but like the Wall Street Charging Bull, people love to touch its testicles. As a matter of fact, students from the Technical University believe that touching it would bring them luck on their tests or exams. 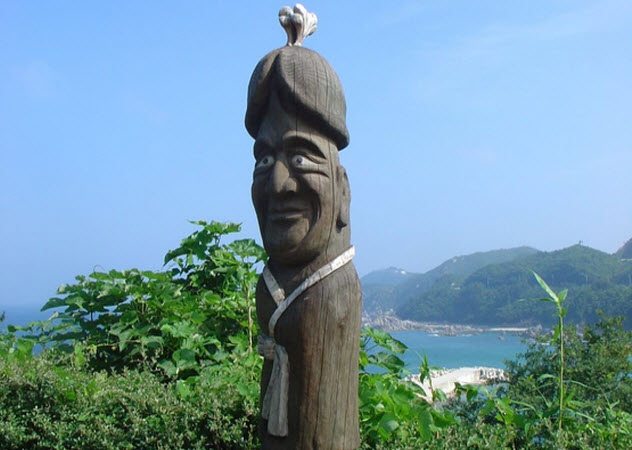 This one here is different, as it’s a park packed with statues of the male genitalia. Well, now you know why it’s in the first spot. And unlike the previous ones, here, you wouldn’t feel guilty touching them. Because seriously, they’re meant to be interacted with. The park was based from an old legend involving a virgin who was supposed to marry her lover. Unfortunately, a massive tide brought demise to her. Following her death, villages weren’t able to catch fish, something they believe to be a curse.

The legend continues that a fisherman urinated in the sea one day and was surprised to find out that the fish returned. Since then, they believe that erecting statues of the male genitalia would bring luck. The park became a favorite of tourists, most particularly the Koreans.