The fraternal twins Jaelyn and Luis Valencia Jr. were expected to be born at January 6, 2016 via Caesarian section as planned by their parents Maribel and Luis Valencia Sr. However the twins decided to make an early appearance and Maribel was brought to the San Diego Kaiser Permanente Zion Medical Center during New Year’s Eve. 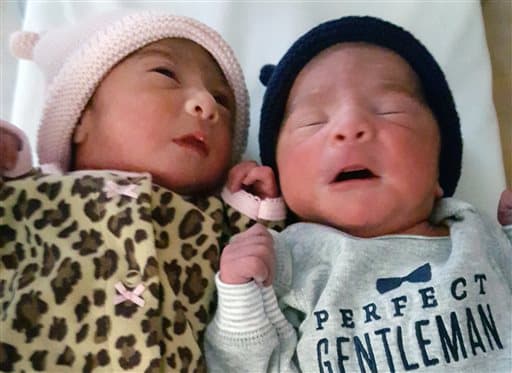 After hours in the Delivery Room, Baby Jaelyn was born at exactly 11:59pm, December 31, 2015. While baby Luis Jr. came out around 12:02 am, January 1, 2016. Both babies were healthy measuring in at 18.5 inches long, and weighing 4 pounds 15 ounces, and 5 pounds 9 ounces respectively. Their father Luis Valencia Sr was not expecting he will have twins, but considers it a very beautiful blessing.

One of the attending nurses Lynnette Coetzee said of the amazing event, “It’s very unusual and it’s very special. I haven’t seen it in all my 34 years of nursing.” She even jests that difference in the birthdates will surely be an extraordinary predicament for the family.

What do you think of this rare occurrence? Share this story to your friends.