If you’ve ever wanted to wear a giant scrotum on your back, now’s your chance to score one of the most wanted satchels in Canada.

The novel knapsack appeared online last year when it was spotted in Montreal where it promptly went viral, causing a deluge in “want this” comments from audiences.

The scrotum backpack…soon to be a best seller. 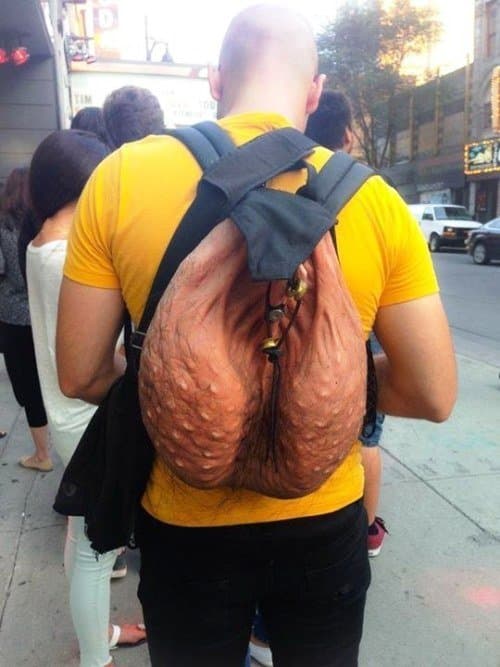 This year, the wait is nearly over, as this humongous ball sack accessory may soon hit the retail market for nut enthusiasts everywhere.

…hanging heavily in all its beautifully disgusting glory.. 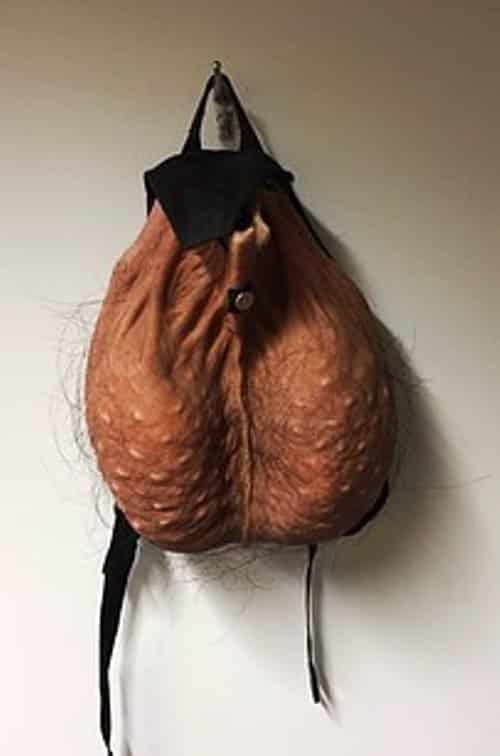 It turns out, the satchel promoter, Daniel Bitton, also from Montreal, Quebec in Canada, has launched his own crowdfunder on IndieGogo, calling his product “Scrote’n’Tote: The Satchel of Life.”

Prompting people to support his project, which he dubbed “God’s most precious cargo,” because it carries “the human race,” Bitton has been able to raise over $5,000 so far, which makes for 17 percent of his $33,000 goal to get his scrotum knapsack funded enough to go into mass production.

…within these balls holds the hope for the human race… 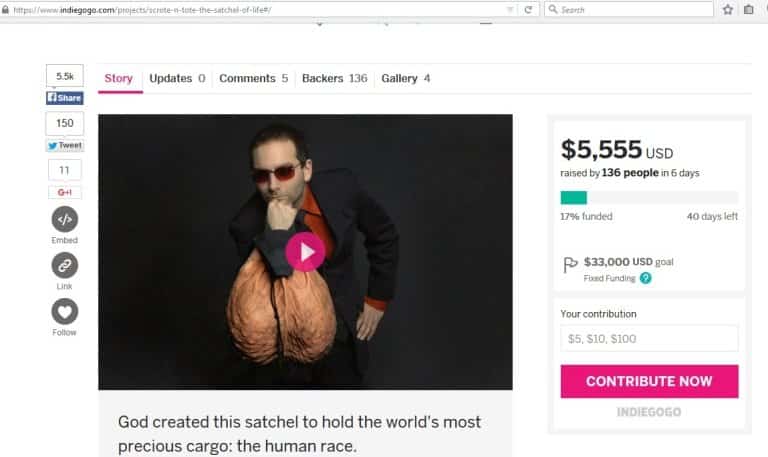 When Bitton reaches his goal, he’ll be able to manufacture at least 5,000 scrotum backpacks, complete with fleshy bumps and pubic hair, which he plans to retail for $120 each.

A close up of the Scrote'n'Tote…durable, functional, and made of high-quality material. 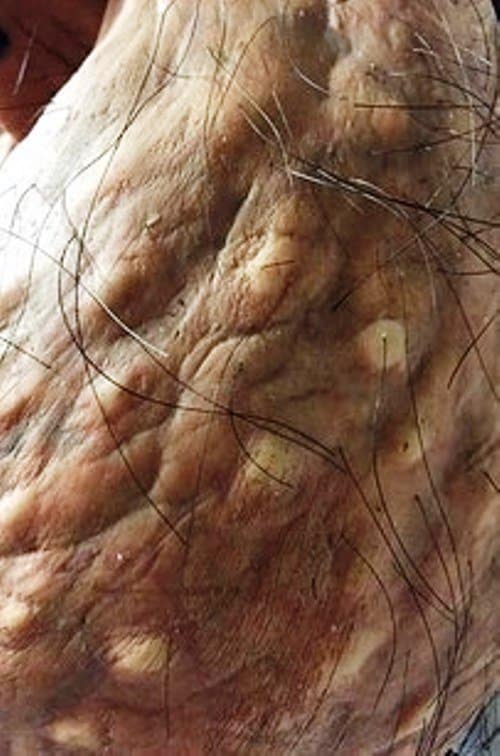 How was Bitton able to come up with such an intimate accessory piece for the human anatomy-oriented fashion fetishist?

It all started about a decade ago when Bitton, who used to work as a movie producer as a side-job while finishing law school, contracted a Hollywood special effects prop designer to create a life-like scrotum backpack for a film project he was doing.

Made out of material that made the accessory feel very much like the real thing, the original satchel cost around $2,000 to make and weighed 15 pounds…

Bitton with the original prototype of his humongous ball sack. 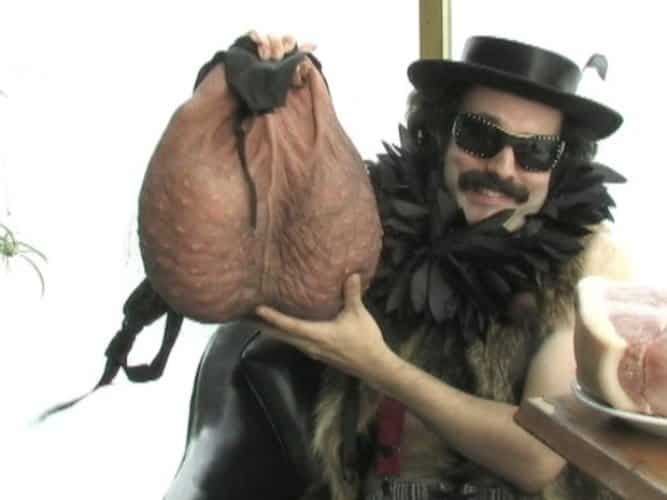 Bitton seized on the commercial potential of the knapsack, particularly after it went viral online and he was bombarded with requests to put the ding-a-ling accessory on retail shelves everywhere.

Using $1,000 in grant money the Canadian government gave him for the movie he had produced, he latched on a scheme to get it crowdfunded for mass production. 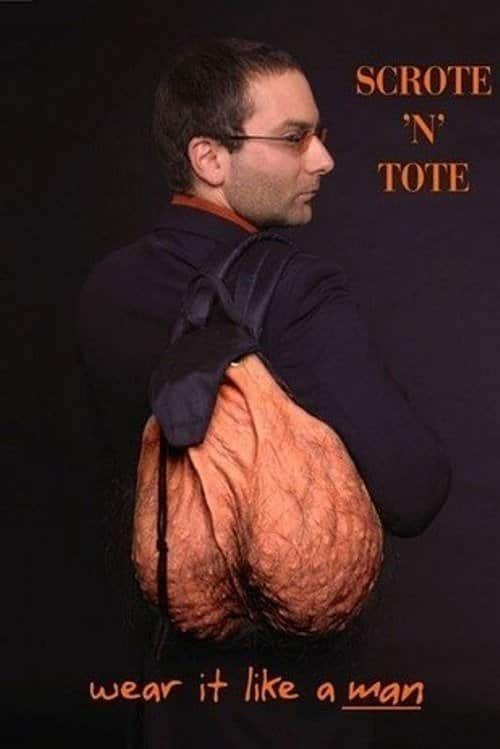 There are 40 days left on his Indiegogo crowdfunding campaign, so if you want want a hairy nut knapsack to keep your stuff in, now’s the time to donate at least $10 to get your own ball sack satchel for only $69 plus shipping, right in time for Christmas.

…because who wouldn't want to own this lovely pair of hairy bollocks? 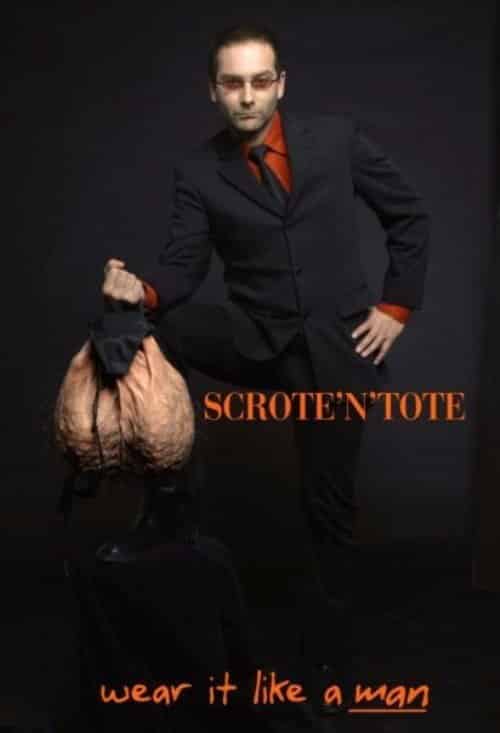 And if the wearer offends you, all you need to do is give them the old kick in the nuts.

According to Bitton, if the Scrote’n’Tote is successful, he is looking to expand into female accessories, with items like the VagBag, and the Cliturese.