12 days before the Rio 2016 Summer Olympics draws to a close, the question whether it is one of the most ill-prepared Olympics held ever is evident. It seems that not only are the athletes facing off against other skilled athletes from all around the world for those Olympics medals, but also with the ill-prepared accommodations and venues of the events. We have gathered some of the issues and incidents reported about the Rio 2016 Summer Olympics which point to this conclusion.

To house the thousands of athletes, coaches, and media that will cover the event, Rio has allotted accommodations called the Olympic Village and Media Village. However, it seems that the preparations are not enough and resulted to the rooms being criticized by the athletes and news reporters. The Australian delegates are the first to point it out saying that,

“Problems include blocked toilets, leaking pipes, exposed wiring, darkened stairwells where no lighting has been installed, and dirty floors in need of a massive clean. In operations areas, water has come through the ceiling resulting in large puddles on the floor around cabling and wiring.”

And the retort of Rio de Janeiro Mayor Eduardo Paes against these complaints from the Australian team:

“I almost feel like putting a kangaroo in front of their building to make them feel at home.”

But to be fair, it’s not just the Australian team that has expressed their concerns; other nationalities such as the Americans and Chinese took to social media such as twitter to show their living conditions in Rio.

Check out some images below:

Unfinished sinks and toilets, faucets that are leaking are some of the problems reported 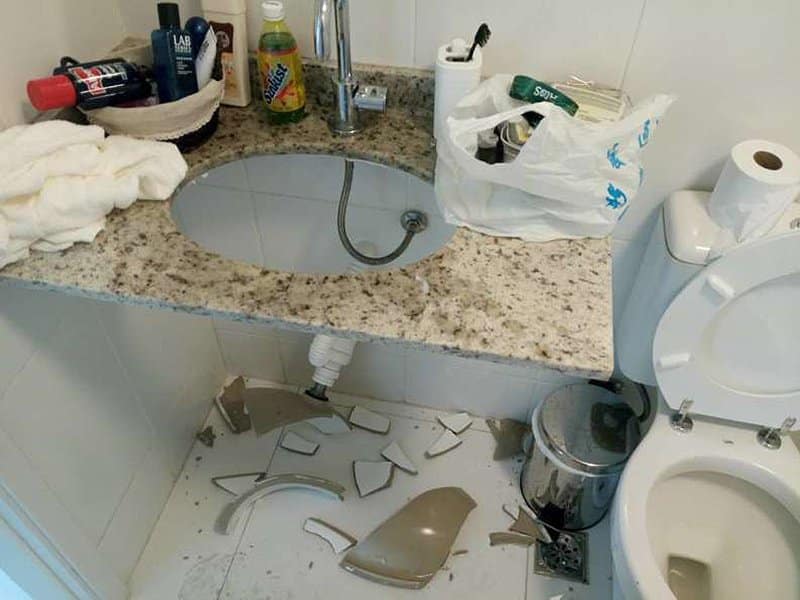 The athletes just had to be resourceful in order to fix some things! 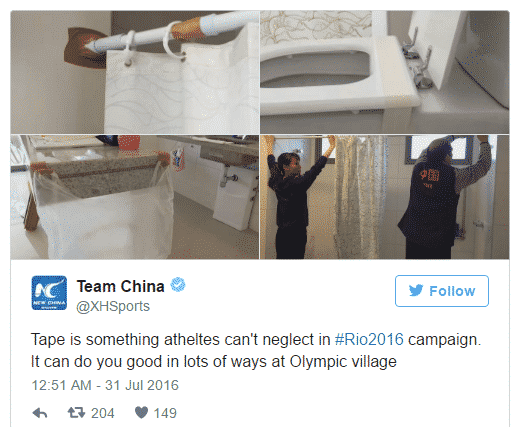 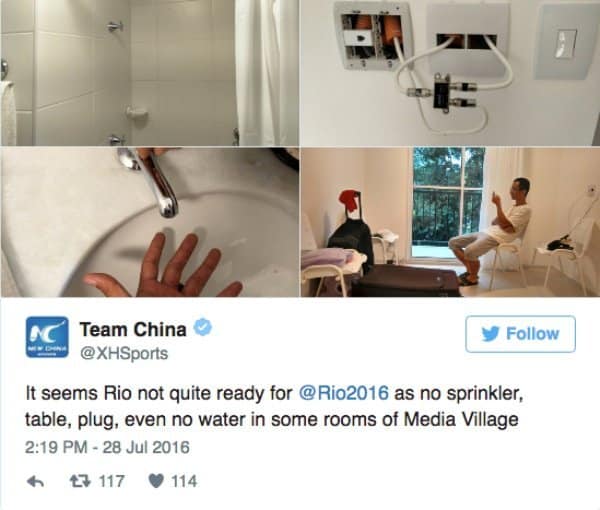 2. Athletes at risk of infection and illness over questionable water quality used for aquatic sports events

Since it is Rio 2016 Summer Olympics, there are a lot of events that include water such as Swimming, Rowing, and Synchronized Diving to name a few. However, it seems that the poor sanitation and water quality in Rio de Janeiro might make the athletes sick. In an environmental test conducted, it showed that the waters in the Rodrigo de Freitas Lake, Guanabara Bay, and Gloria Marina have an average of 37 million adenoviruses and record-high readings of 1.73 billion per liter! Coliforms are also found and these microorganisms are responsible for bloody and explosive diarrhea. This high organism load is due to the untreated sewage of the city’s population being dumped in the waters.

Months before, efforts to clean up the waterways were done. Imagine these cleaners with full gears on, how about the athletes who will go in these waters totally exposed? 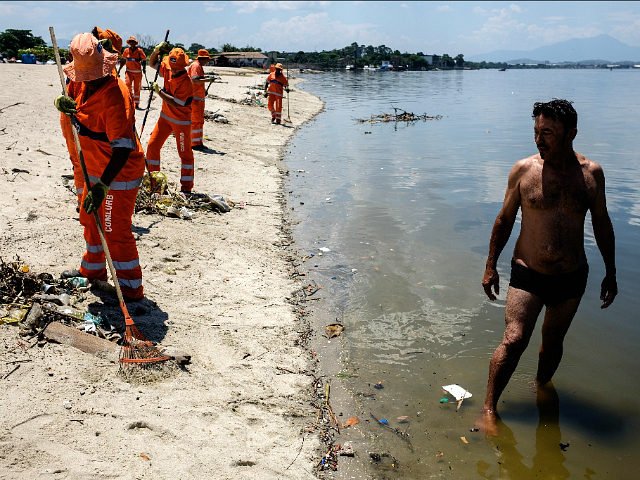 Some teams who went in there early to train reported having been sick and not able to get up for 1 or 2 days. 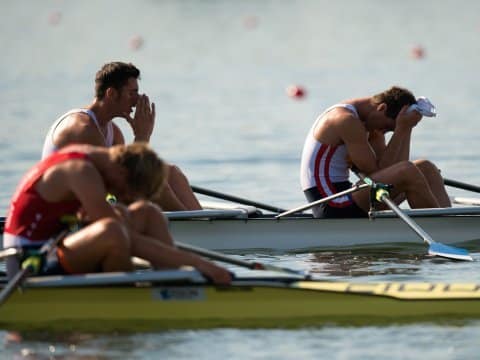 Experts are saying that ingesting just three teaspoons of the sewage-laden waters is bad enough to give anyone infection. But it is not just the natural waters that are deadly, even the man-made pools in the Maria Lenka Water Sports Stadium have questionable water quality. The water in the diving pool changed color overnight!

The stark contrast: the still blue waters of the olympic swimming pool and the diving pool turning a greenish murk overnight. 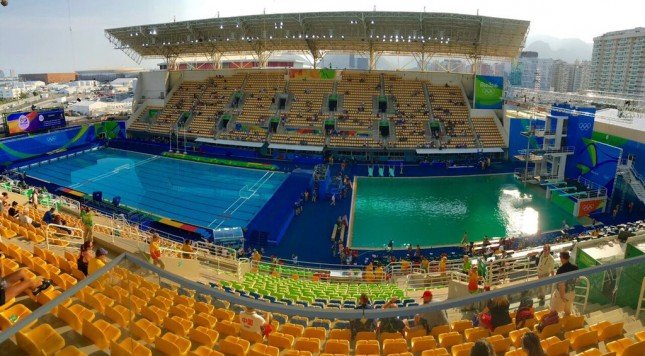 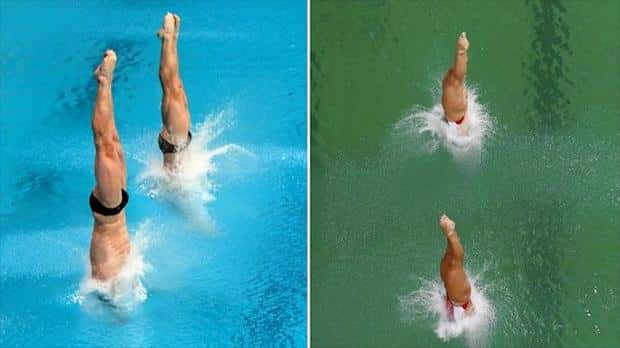 Experts are speculating that perhaps the water was not chlorinated enough and thus green algae grew. But imagine how many algae was present to turn the pool color green overnight!

3. Aside from environmental hazards, safety is a key issue too

Brazil is notorious for having lots of thieves and robbers that prey on tourists, earning it a reputation for being one of the most dangerous cities in the world. Several athletes have fallen victim to these robberies and assault. Chinese athlete Shi was scammed in his hotel upon arrival when a “drunk” Brazilian man puked on him. As he went away to clean himself up, his baggage was gone. Another robbery (at gunpoint) happened to Paralympian Liesl Tesch of Australia who was pushed off from her bike by a man in Guanabara Bay. The man pointed a gun at her while he made off with her and her physiotherapist’s bikes.

To see just how threatening Brazil can be, here is a video of the lawlessness and the daring of these thieves even in broad daylight.
https://www.youtube.com/watch?v=Z3XFaeQHgps

BONUS:
For a round-up of all the Rio 2016 Summer Olympic issues, watch this:

So win or lose, the athletes from our countries really deserve a hero’s welcome after enduring so much from the Rio 2016 Summer Olympics. And we hope that the next venue, Tokyo Olympics 2020, has better things in store.

Found this interesting and informative? Share this article with your friends.