What happens after a prankster breaks his girlfriend’s heart by making her think that he is a cheater?

Recently, YouTube channel ViralBrothers shared the video of a guy who pulled a prank on his girlfriend after he found out that she is snooping around his phone, in an attempt to find clues if he is flirting with other girls. That’s the reason why the guy, Čeněk Stýblo, worked with his colleagues from Viral Brothers in plotting a foolproof prank for her.

The guys began their plan by creating fake romantic conversations between Čeněk and a ‘third party’. To make the act more believable, they took a picture of him with another woman in bed. Čeněk will then send this photo to his phone using a friend’s phone, to make it appear as a message coming from the supposedly ‘other woman’. Then they placed hidden cameras in the living room so they can see the reaction of Čeněk’s girlfriend.

Then one night, Čeněk executed the prank and, of course, everything went as planned. Čeněk went to the toilet, leaving his phone at the table next to his snooping girlfriend. Then while inside the comfort room, he sent the picture to his own phone. While he was insanely laughing at his naughty trick, the reaction of his girlfriend was a lot crazier than you could ever imagine.

Little did Čeněk know that his girlfriend was planning to retaliate. In the following video, you will see how Čeněk’s girlfriend made him pay for his crazy prank. And boy, he sure paid the price! I don’t even know if he would ever forgive her.

Now that’s learning the hard way! I think that’s the craziest thing I’ve ever seen. After seeing Čeněk writhe in pain, it made me wonder if this couple would actually end up married or if they would break up soon. Because if this exchange of crazy pranks continues, one of them could get seriously hurt someday. What do you think?
Credits: ViralBrothers

Groom Cancels Wedding After Seeing His Bride Looks Like An Old Lady.

Unfortunately, she picked the wrong day to prank her fiancé…

This is a perfect example of a prank gone terribly wrong. A Chinese bride wanted to test how much her soon-to-be husband truly loves her. But she absolutely chose the worst day to prank her fiancé - their pre-wedding photo shoot.

A Chinese bride-to-be arrived on their pre-wedding photo shoot looking like an old lady.

Qing Kao, the 26 year old would-be-bride from Shenzhen, China, made herself look 50 years older by putting gray and white streaks on her hair, and make up showing a wrinkly, old face. It was supposedly a part of her test to see if the man she will marry would still love her even if she already looks older.

Man Fell From The 3rd Floor, Landed With A Thud Then Simply Stood Up Unharmed

How would you react if you witnessed someone fall from the third floor of a shopping mall? For sure you will freak out as you imagine the gruesome image and the amount of blood you will see if you look down. Maybe, you will be shocked as your mind tries to process the horrible accident you just witnessed. Some people would probably panic and would not even bother to look down, afraid that they won't be able to take the gruesome sight.

Some people in this mall were totally horrified when they witnessed a man fall from the third floor. They heard a loud thud and someone screaming in pain. They hurriedly ran to check the victim but what they saw literally left them speechless and in a state of disbelief. The man appeared alright, although limping a little and groaning out of pain.

It turns out, the elaborate prank was a subversive promotion by Youtube's top magical prankster, Magician Rahat for the film Rest in Peace Department (R.I.P.D.) Rahat re-enacted a dramatic scene from the movie where two characters falls from a third story and simply walk away.

“OMG! The Poor Turkey Was Pregnant” Girl Burst Into Tears On This Thanksgiving Prank.

Watch this girl get upset believing she roasted a pregnant turkey and its unborn baby. 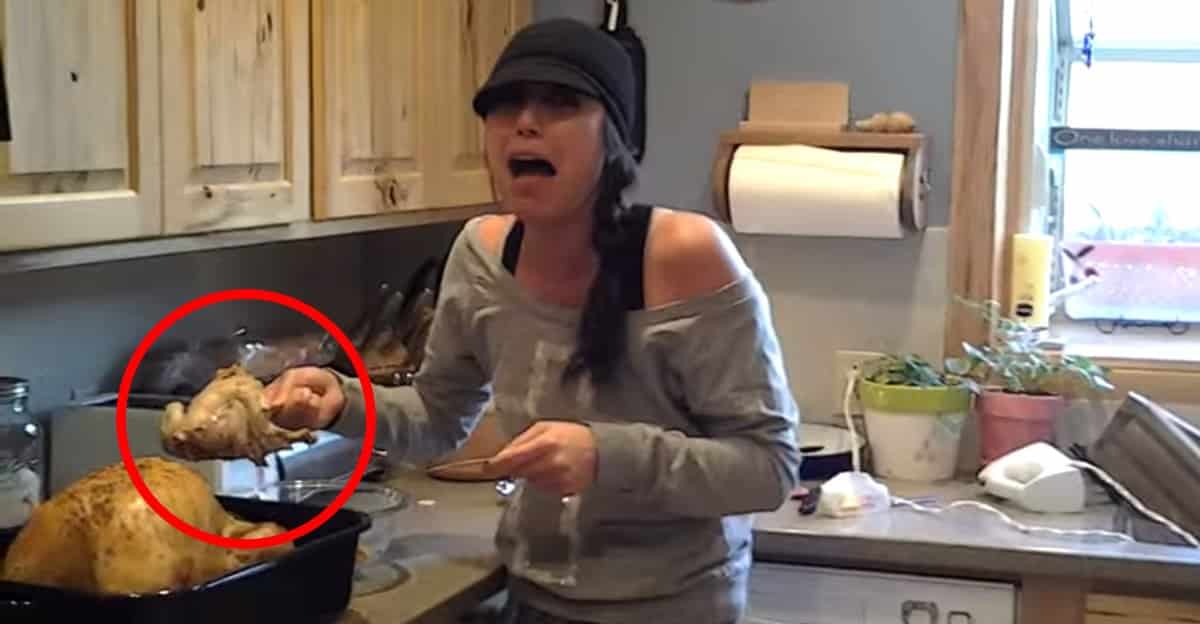 Spending quality time with family, preparing and eating your favorite foods are what most people look forward each year on Thanksgiving Day.

Unfortunately, a hilarious Thanksgiving prank by your mischievous mother is perhaps something you would never expect, especially an elaborate one that involved a "pregnant turkey".

This video started innocently with a mom filming her daughter preparing some delicious turkey and stuffing for the occasion. But Raquel, the victim of the prank, didn't realize the surprise waiting deep inside the turkey as she removed spoonfuls of stuffing from the bird.