Much as we hate to admit it, but sometimes kids are way way better than us adults in some brain games. Is it because we’re getting rusty with our problem-solving skills, or are kids nowadays just have higher IQs?

Well let’s put those thinking gears to the test by trying out this brain game! This has been featured in National Geographics’ show Brain Games. And they claim that 80% of kids below the age of 10 can answer this in just one look. It involves a yellow school bus, and the question is very simple…

Which is the front end of the bus? Which direction will it move forward?

Just by looking at the bus, can you tell which is the front end and the direction it will move?

To the left? Or to the right? 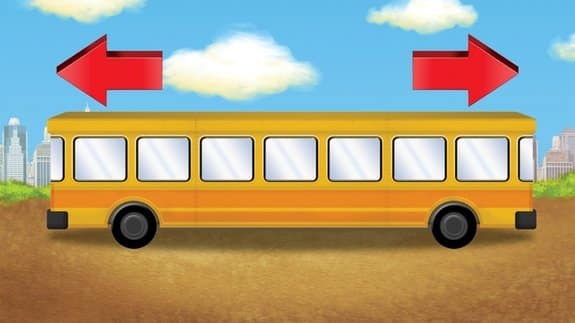 Does it seem impossible to solve this? Maybe we need clues, can the direction of the bird or the plane help us?

It's a bird flying towards the right…

And it's a plane… moving towards the left.

And the answer is… ugh still stumped with no logical explanation whatsoever? Do you want to check out if your guesses and rationale is even close to the correct answer?

Watch the kids below nail it in one look…

That’s a pretty simple trick but most adults won’t get it because we will overanalyze and overthink things. In my case I even thought that either direction is fine, what if the bus moves on reverse? Also, we may be forgetting details such as the layout of the doors of a school bus because we don’t usually ride it, compared to the kids who are very familiar with it. So if that’s any consolation, yeah that means we’re not that dumb after all! 😛

Want to challenge your friends with this brain game too? Share it to them! 🙂