Warning: This video is not for the squeamish.

An incarcerated man attempted to escape prison The Shawshank Redemption style. But, instead of finding freedom at the end of the filthy tunnel, all he got for himself was a load of crap—literally, and probably the most unforgettable, ghastly experience of his life. Yuck!

The unidentified prisoner from one of Brazil’s penal facilities dug a hole under a communal toilet in an attempt to mimic Andy Dufresne’s successful jailbreak. Andy, played by Tim Robbins in the aforementioned film, was a wrongfully convicted man who fled from jail by crawling through 500 yards of disgusting, foul-smelling, human excrement.

However, in the video, which was originally uploaded to Liveleak.com on December 29, the unfortunate inmate who tried to slither head first in the clogged sewer, failed to get the redemption he so desired. I don’t think he even managed to crawl 3 feet from the john.

He was trapped and was completely covered in faeces. 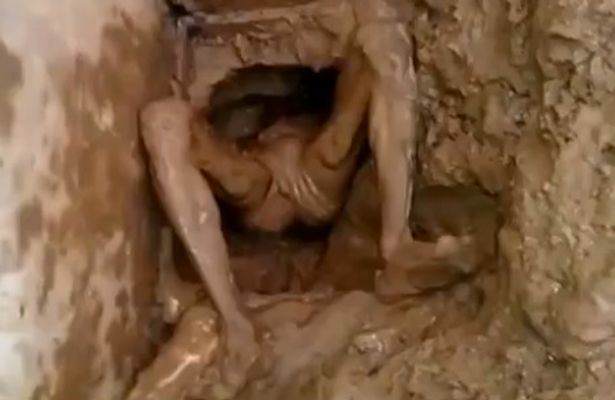 Two men then grabbed his legs and pulled him out of the disgusting hole.

Maybe, he shouldn’t have removed all his clothes before he crawled into the potty. Andy only removed his dirty shirt after he got out of the drainpipe!…Nah!

This video has been viewed more than 135,400 on Liveleak while its YouTube version garnered more than 43,000 views. Ain’t that a blockbuster?

The Shawshank Redemption received seven Oscar nominations in 1994 including one for Best Picture. The crime/drama film stars two of America’s most respected and award-winning actors, Tim Robbins and Morgan Freeman. Shawshank, which was based on Stephen King’s short story, Rita Hayworth and the Shawshank Redemption, was adapted for the screen by the writer, producer, and director Frank Darabont.

Too bad, mate. You won’t get an award for the most ingenious prison escape, but you’ll probably be nominated in the best actor category. That was a tough act!