The headline alone can induce anyone into a panic. This is not a drill. It is true that a giant gas cloud with the power of 2 million suns is speeding our way at the ghastly speed of 700,000 miles per hour. Before you go hysterical, the Smith Cloud won’t reach the Milky Way galaxy until the thirty million years. You can relax for now.

This is the Smith Cloud visualized in comparison to the Earth's moon. 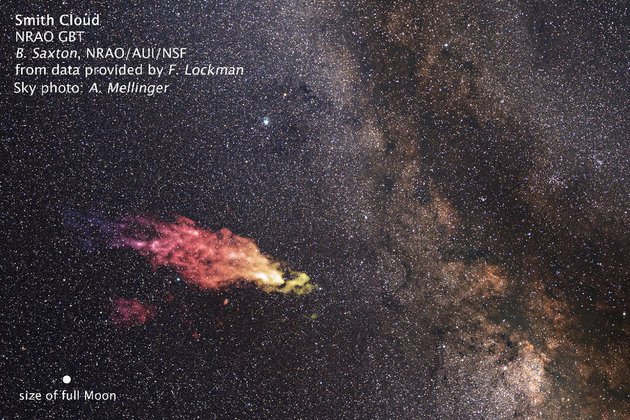 The Smith Cloud, named after its discoverer Gail Smith, was first detected in Netherlands. It is full of sulfur that is said to be over 11,000 light-years long and 2,500 light-years wide and contains the mass of about a millions suns. This gigantic gas cloud was likely spat out from the outer edges of our galaxy. This is pretty much a case of “what goes up must come down,” said the Hubble Space Telescope astronomers.

This image shows the trajectory of the Smith Cloud which includes the predicted return in about 30 million years. 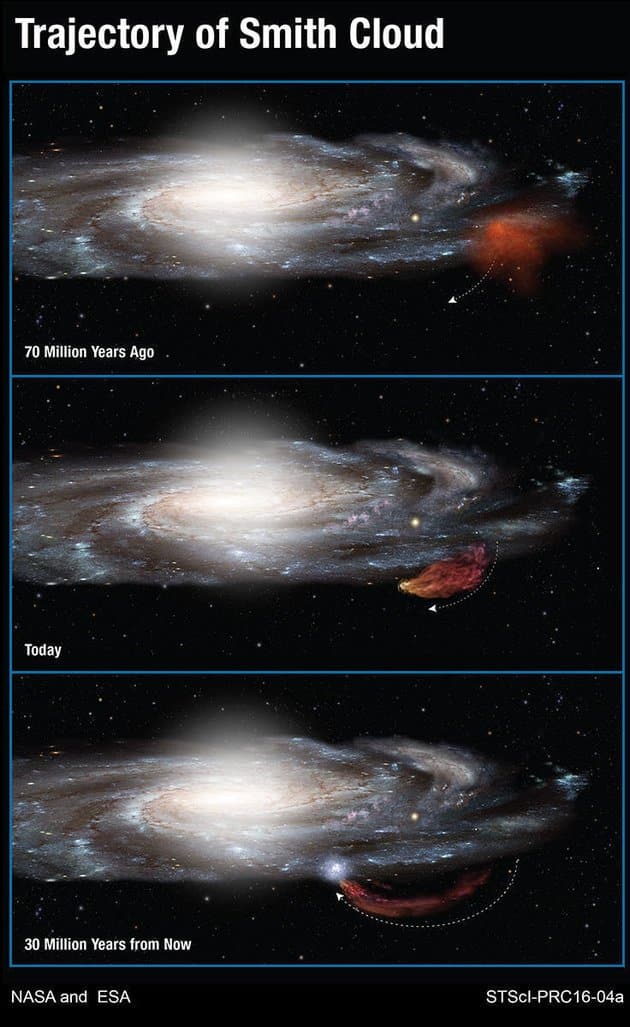 The trajectory of the Smith Cloud is unique and interesting because it is well-known among the astronomers. The arcing trajectory strongly indicates that the origin of the gas cloud is from our own galaxy. Upon its return, the group of astronomers is predicting a possible burst of star formations, and even potentially providing enough gas to make as many as two million suns.

The Smith Cloud was named after its discoverer, Gail P. Smith 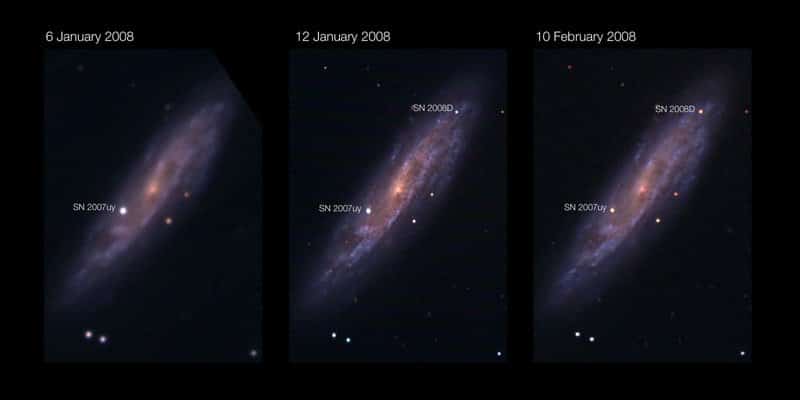 “The cloud is an example of how the galaxy is changing with time,” said Andrew Fox of the Space Telescope Science Institute in Baltimore, Maryland. “It’s telling us that the Milky Way is a bubbling, very active place where gas can be thrown out of one part of the disk and then return back down into another.” 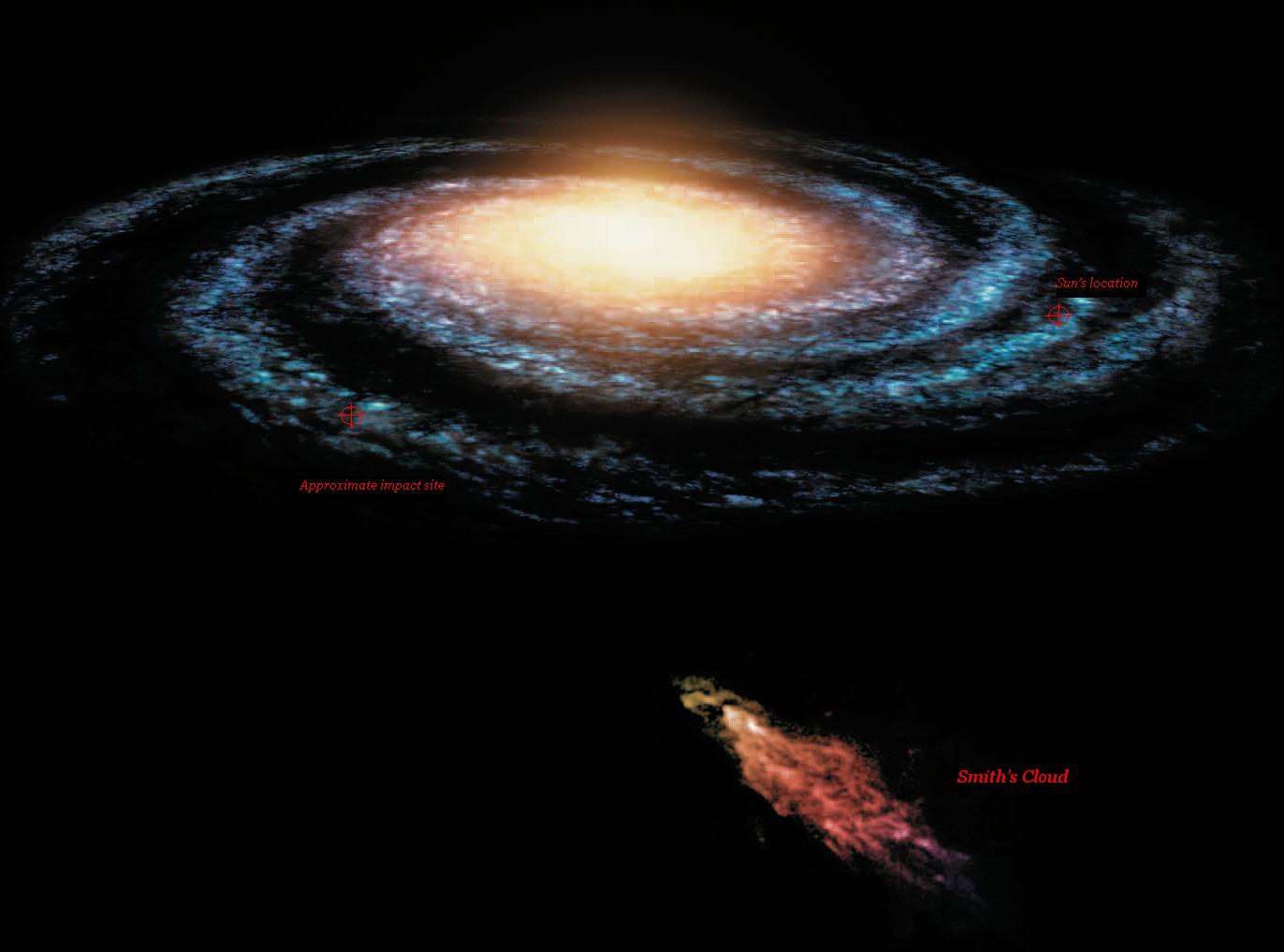 Why and how the space cloud was catapulted into space is still unknown. There are suggestions pointing to the possibility that the space cloud is dark matter that collided with the Milky Way and captured gas as it went on its way. We can only make guesses for now, and wait until further research gives us an answer.

The giant gas cloud is said to be full of sulfur, over 11,000 light-years long. 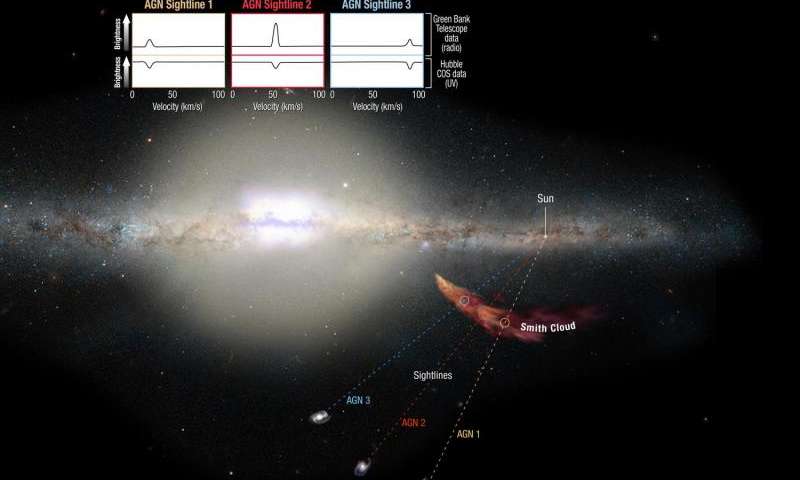 We all won’t be here by the time the Smith Cloud boomerangs back into the galaxy, so we hope that the generation who does get to see the momentous event, documents it for the future generations to come.