22-year-old Cassandra Bankson of San Francisco set up her YouTube channel several years ago to offer advice on everything from living with severe acne, to make-up tips and dealing with bullies. Now she is using the medium to shed light about her rare condition, uterus didelphys which is known as double uterus and occurs because the uterus begins growing as two small tubes, rather than one.

In a Q&A video, she answered some questions about it and whether or not this medical anomaly is responsible for the chronic acne that made her famous.

The YouTube star who runs beauty-focused YouTube channel DiamondsAndHeels14, told her hundreds of thousands of subscribers that after complaining about her back pain, doctors made the discovery that she only has one kidney but two vag¡nas, two wombs and two ‘cervixes’. Cassandra, who also works as a model, explains that she has chosen to discuss her condition in the hopes that other people, especially those with the same condition, will be enlightened about it. 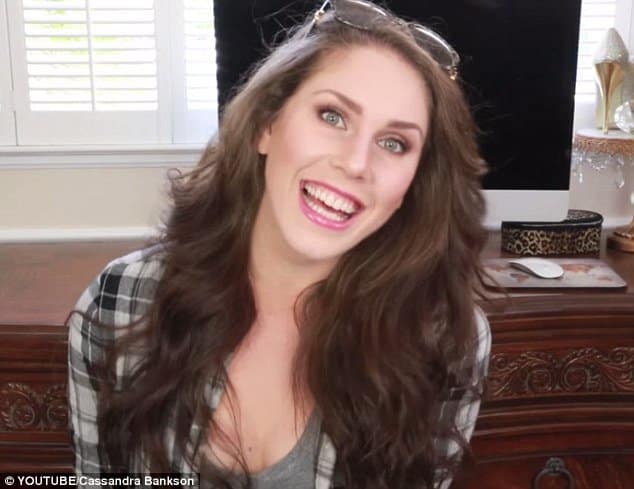 According to the doctors, Cassandra has been diagnosed with uterus didelphys (double uterus) and this occured because the uterus grew as two small tubes, instead of one.

‘Maybe there are other people out there who are dealing with this and feel embarrassed, or alone, or weird or different and it’s just a medical anomaly,’ she says. ‘I guess my life is a little public on here. It’s kind of my way of therapy I guess.’

‘I was born with two things. Does that automatically mean I will have acne? No. If I was born with an extra toe, would that mean I have acne? No,’ she says. ‘Just because I was born this way, just having that, does not cause acne.’ ‘However, because of the added hormones it could aggravate acne, ‘she added.

Cassandra also says her genitals looks like a ‘regular vajayjay’ but described that instead of having one large vag¡nal cavity, she has a deviation, similar to a nasal septum that separates it into two.

‘I have always used pads opposed to tampons. That’s never really been my thing. And so I never really found out even though I had issues with bleeding for extended amounts of time.

‘Nobody suspected I had two vag¡nas. They just thought I had crazy hormones. And I couldn’t really tell. It is the same on the outside.’

Cassandra also noted that for confidential reasons, things that are sexual in nature have always been ‘traumatic’ for her.

‘Stuff happened and anything of that nature has always been very uncomfortable, and I don’t know if that’s physically because it is uncomfortable or because of the trauma that I mentally associate with it,’ she said.

In the past, Cassandra shared she had zero confidence and had to leave school because of bullying.

‘The YouTube channel and community completely changed that – it helped make me into the confident person I am today.’ 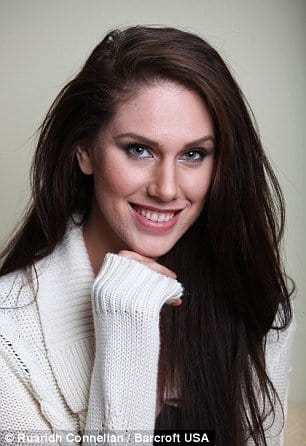 Cassandra said she has yet to have a pap smear but noted that she will need to get two to check for cervical cancer in each of her vag¡nas since not only does cancer run in her family but both of her great grandmothers died because of it, one of uterine born cancer and the other of ‘mysterious vag¡nal bleeding in the Ukraine’.

Many of her fans were also curious to know if she will be able to have children and Cassandra outright said she doesn’t know. Her OB/GYN told her that there are some cases where the septum that is separating her vag¡nas can move over or tear to make way for the baby to come out, and other people have cesarean sections. Cassandra says she knows one woman in India who was born with two wombs and was able to give birth to two sons – one from each uterus.

Photo of Cassandra visiting Dr Dena Harris (left), said she is unsure if she will be able to have children in the future. 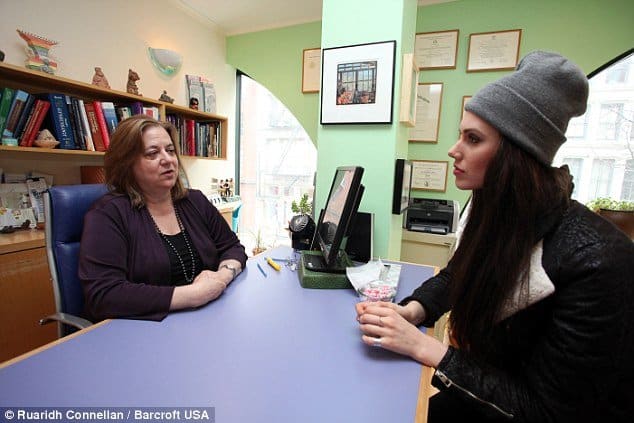 ‘The thing is, I really don’t know if I want to conceive. I am not trying to,’ she says. ‘I have always been open to adoptions and other options.’

Cassandra also adds: ‘There are a lot of people who don’t have two vag¡nas that have a hard time getting pregnant too.’

For her final question, Cassandra confirms that she does get two periods, noting: ‘It sucks!’

She explains that she can have both periods at the same time, but they also occur at separate times. Occasionally one comes right after the other, resulting in an extended period.

‘It drives me nuts, and it probably drives everyone around me nuts too because I am really a raging hormonal person,’ she says.

‘Ever since I was younger I would go to the doctor because I was bleeding for 28 days or I would have two periods a month – but they never suspected I had a second vag¡na.

Dr Leila Hanna, a consultant gynaecologist & Obstetrician at BMI The Sloane Hospital, said women can go for years without realising they have an extra womb. 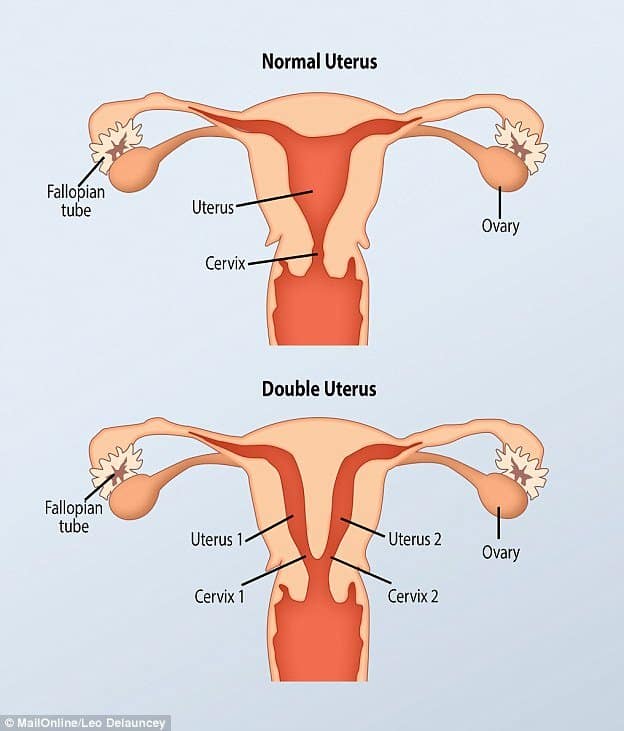 When the female fetus is developing, two tubes normally join to create one larger, hollow organ – the uterus (top picture). But in a minority of women, including Ms Woodhead, the tubes don’t join – allowing two hollow organs to form instead. This means the woman is born with two wombs (bottom picture).

Despite the rarity of her case Cassandra found her family very supportive when she made the announcement.

‘I kind of walked in and said: “Guess what mom I’m twice the woman – I have two vag¡nas,”’ she recalled of telling her parents about her condition.

Cassandra noted that her friends are also supportive and still see her as ‘Cassy – not Cassy with the two vag¡nas.’

Before she was diagnosed with having two vag¡nas, Cassandra has been struggling with chronic acne for years, explaining that she got her first pimple before she was 10-years-old.

Cassandra said that when she was in high school her acne got so bad that it ended up covering 90 per cent of her chest, face and back. At that point she had to leave school because of the bullying.

‘I had zero confidence and just did not like the person I was. I was incredibly quiet and it was painful to talk to other people,’ she said.

After leaving public school and enrolling in a private study program, Cassandra was able to graduate two years early and do lots of research on how to deal with her acne.

‘I discovered that sometimes the four dollar concealer from the drug store worked much better than the fifty dollar designer product – there was a lot of trial and error.

Until she decided to do lots of research to deal with her acne. 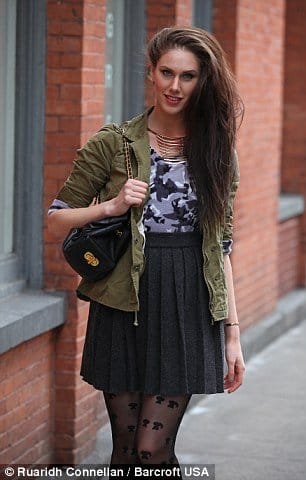 ‘I was able to use make up to look like the person I wanted to be within a sensible budget.’ 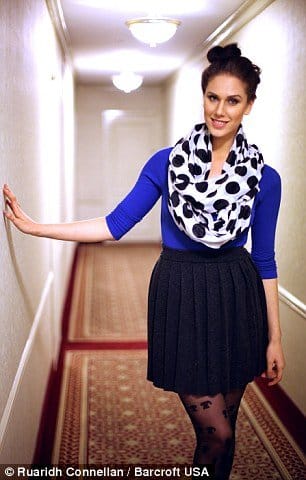 ‘It all took off for me when I decided to share what I had learned with YouTube – it became very popular.’ 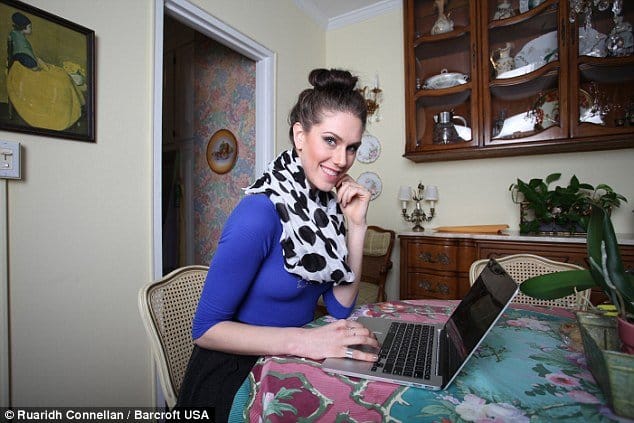 ‘So far it got around 26 million views and it just keeps going – I posted it shortly after launching the channel and that’s when I knew how big this thing could be – how many people need this help, advice and support,’ Cassandra added.

‘My subscribers went up over night and I started to get calls from the mainstream media – it was like a whirlwind and things haven’t really slowed down since.’

Cassandra has also done some work as a model and even hit the catwalk at New York Fashion Week for popular brand Boy Meets Girl.

Watch the her Q&A Video below: 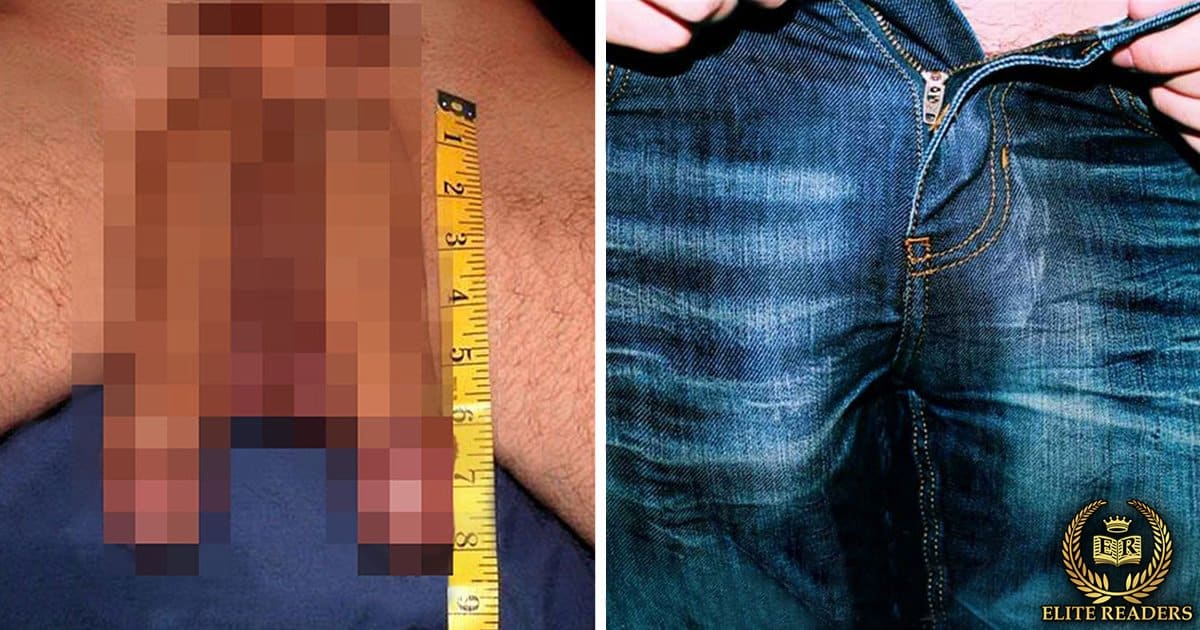