Reckless driving is a serious crime that has several inimical consequences. Many lives have been lost or have been affected due to negligent drivers.

In as much as I hate reckless drivers, we could not hastily blame all road accidents to the drivers.

Sometimes, accidents occur due to pedestrians who don’t know how to obey traffic rules. And it’s frustrating when they always blame the drivers instead of admitting their irresponsibility and ignorance.

But if the victim is a child, who do you think most people would blame?

A CCTV footage of a vehicular accident involving a child has emerged recently. Approximately 40 seconds into the video, you’ll see a slow moving, yellow jeepney approach from the left screen. Apparently, the vehicle is being used as a school service.

Seconds passed and a young boy wearing a blue shirt can be seen running towards the seemingly peaceful street. He looked back, giving us the impression that he is playing o running with someone; and evidently, the kid was.

After a few seconds later, the kid’s playmate appeared and was hit by the vehicle, and it even ran him over. 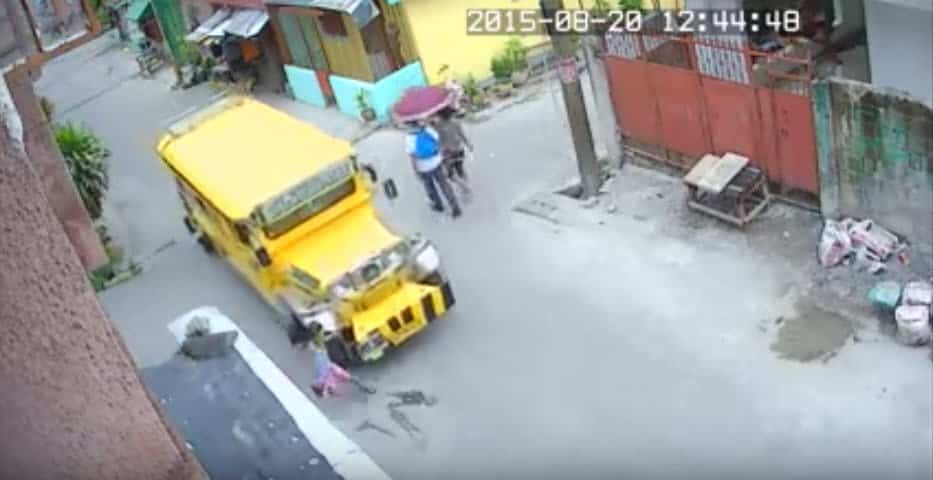 The driver stopped immediately, and he brought the child to a hospital.

Accidents happen whether we want them to or not. The only thing we can do is to try to observe safety measures, wherever we are. But, in this case, do you think the driver is at fault? Or should we blame the parents for letting their children run loose?

Watch this video and tell us what you think?