Everybody hates rats. I don’t know anyone who finds them cute and are willing to let them stay in the house. Usually we won’t hesitate to drive them out of the house by chasing them with a broom or something. Well actually, you might hesitate a little if the rat happens to be 15-inch long.

A family in Stockholm, Sweden was terrified to discover that this monster of a rat was snacking away on leftovers under the kitchen sink. Their pet cat was too scared to go into the kitchen, so they investigated the source of the noise. It turned out that the huge rat already made itself at home, staying at the space behind the dishwasher.

“It was right there in our rubbish bin, a mighty monster. I was petrified. I couldn’t believe such a big rat could exist.” 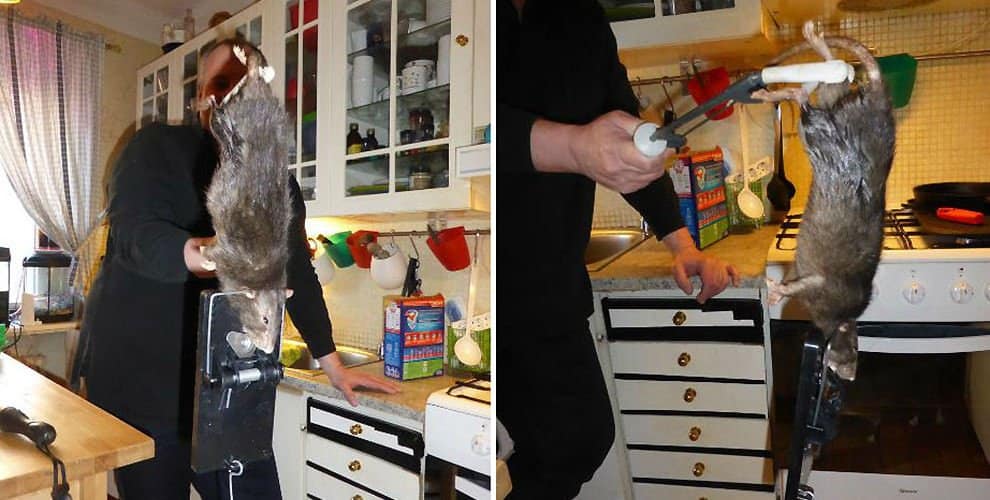 She was so terrified that she called her husband Erik Korsas, who was away during that time. The rat caused more trouble in the household by gnawing through a pipe, causing flood in the kitchen.

By the time Erik came home and saw the rodent for himself, “the rat was so domesticated that it just sat under the kitchen table,” he reported. They waited until the rat went into his nook behind the dishwasher, then they locked the kitchen and called the pest controllers.

It took three heavy-duty traps to catch the enormous rat, but it managed to get away and hid behind the dishwasher again.  The rat eventually died when it got stuck underneath a wooden plant and choked itself to death.