Australia has quite a reputation for dangerous spiders. In fact, more than 2,400 species of spider can be found there and less than 50 of them are harmful to humans. While this is rather alarming, scientists reported that bee stings are more deadly than spider bites on Australian shores.

Meanwhile, this concerned Australian parent constantly reminds his son about leaving his shoes outside the house. Apparently, he forgot that he left them over the weekend and now he just learned his lesson the hard way.

“And this is why you should always check them before putting them back on,” the dad says.

His dad explains at the beginning of the video that he brought his son’s shoes back inside the house and discovers this– a spider lurking and living inside the trainer shoe. Dad saved the day, of course (especially from the possible risk of a venomous spider bite) because that’s what “super dads” do.

He then began coating the shoe in with some bug spray but to no avail. 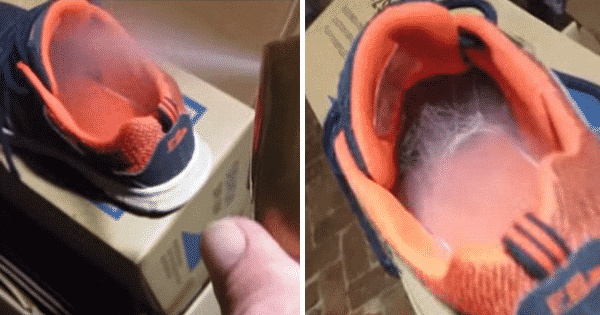 It seemed that the spider still refuses to come out just yet so he reached for a skewer, started poking it..and–voilà! A black big funnel web spider emerging from its hiding place.

“Welcome to Australia,” he said.

It comes with a helpful reminder too,

“If you happen to leave your shoes outside overnight, always check them. Especially if you live in Australia,” he captioned the video.

That was one “sneaky” spider, indeed. By now, his son probably thinks it’s always wise and safe to take his father’s advice. After all, parents know better and they are “almost” always right about a lot of things.