An enraged husband in China allegedly bit off his wife’s nose and swallowed it in anger after she failed to answer his calls.

The victim, identified as Yang, suffered severe injuries as she almost lost her entire nose. Doctors said she will be undergoing extensive surgery since her nose’s nasal septum, nose tip, and soft triangle were already gone.

Reportedly, the estranged couple from Dezhou City in China got into a nasty fight after Yang did not pick up her husband’s late night calls. According to Yang, she was too tired to answer his calls as she came from a late shift at work.

Unfortunately, Yang’s decision not to return his calls infuriated the husband. The next day, the man stormed into Yang’s office and did the unthinkable.

Yang has been left disfigured because of the gruesome attack. 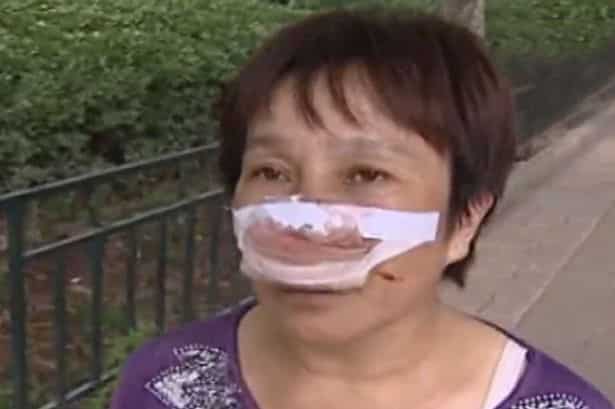 “And the next thing I knew, he pushed my head towards the way and ate my nose in one go,” Yang told Shangdong Television station.

According to The Independent, it would take doctors at least three months before they can reconstruct Yang’s seriously damaged nose.

Local news reports revealed that both were divorcees when they tied the knot. The two had a tumultuous relationship and ended up separating after the man, who had two grown-up children from his previous marriage, tried to sell their child so that Yang could take care of his grandchildren.

The man has been missing since the gruesome attack and the police have launched an investigation to track him.

In China, about 25% to 40% of women become victims of domestic violence. Unfortunately, many perpetrators are rarely penalized while police choose not to meddle. It is also rarely acknowledged as grounds for divorce in the country.