A lot of kids dread doing their homework and will do anything just to avoid it. There are kids who hate going to school altogether and would rather spend their time online or playing video games. These children have no idea how lucky they are, because there are kids out there who will give anything just for the chance to do well in school.

This young boy from the Philippines has big dreams and he will do whatever it takes to achieve it…even if it means doing his homework outside a McDonald’s restaurant.

Daniel patiently studies outside the restaurant, making use of the light spilling outside. 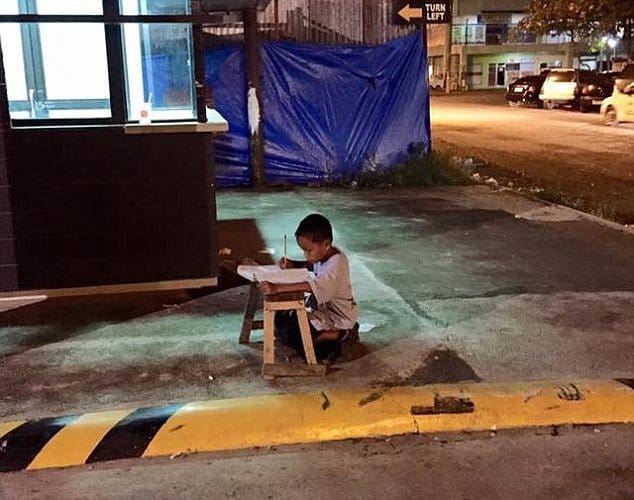 9-year old Daniel Cabrera was spotted studying late at night just outside the restaurant in Mandaue City, making use of the light that spilled from the interiors so he can read. He was using a makeshift bench as study table. During that time, medical student Joyce Torrefranca was walking along the street when she saw the boy. Moved by this touching scene, she took a photo and shared it on her Facebook page. It quickly became viral and the netizens became impressed with the boy’s perseverance.

He studies hard while his friends play in the streets. 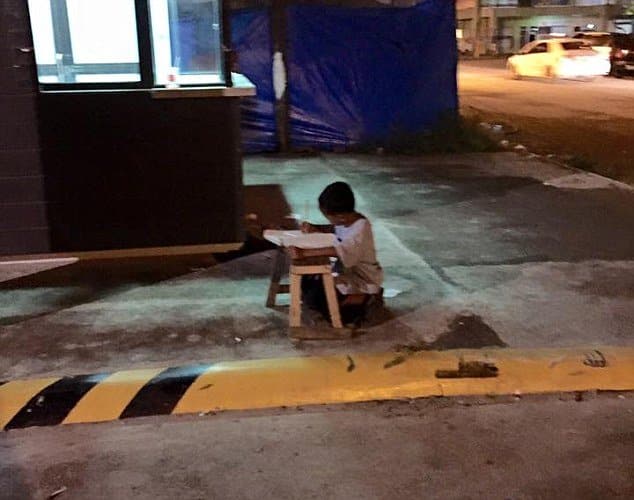 Joyce Torrefranca was so touched by the boy’s perseverance. 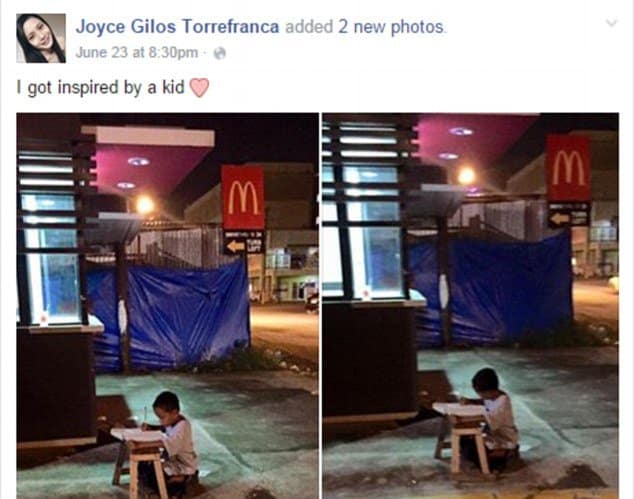 Torrefranca was grateful for the people’s appreciation for her post.

“I didn’t think that a simple photo can make a huge difference. Thank you guys for sharing the photo. With that, we were able to help Daniel in reaching his dreams.”

Netizens reached out to encourage and help Daniel.

Giomen Probert Ladra Alayon, who also spotted Daniel outside McDonald’s was able to chat with boy. He was all praises for the boy’s determination. He wrote on his social media page:

“His example leaves us to ask ourselves, ‘If this kid can do it, why can’t we? Why do we need to go to coffee shops, study centers, etc. to pay much if studying only requires study materials and your own will power?”

“Daniel perseveres because he knows how it feels to have nothing. We should learn from him. Life’s greatest lessons come not from famous personalities but from simple people. Keep your eyes and mind open.”

“We should learn from him. And with that discipline and focus, I’m sure he will become someone someday! God bless everyone! Good day!”

It was soon discovered that Daniel is a 3rd grade student living with his mother and brother in a cramped food stall with no walls. His father reportedly died in prison and their old house was burnt down. The family’s poverty didn’t stop Daniel from studying. While his classmates are out playing in the streets, the boy studies hard using the light from McDonald’s.

Daniel owns only one pencil because another student stole his second one. He dreams of becoming a doctor or a policeman someday.

Concerned citizens set up a fundraising page for Daniel to fund his education. Their efforts were rewarded – donations have already amounted to PHP 22,900 (around USD 507), which is already half of the targeted PHP 50,000 (around USD 1107) for his schooling needs.