Daniel Wilson DIY enthusiast, woodworker, and leather crafter extraordinaire received an old table as a donation. It was a tad used, and not really his style, but that didn’t stop him from transforming it into a glowing work of art. He decided to revive the table by turning it into a glow-in-the-dark table with a map of the world.

Here’s how he did it.

He started off the project by getting a simple map off the net, and printing it in 6 A4-sized segments. 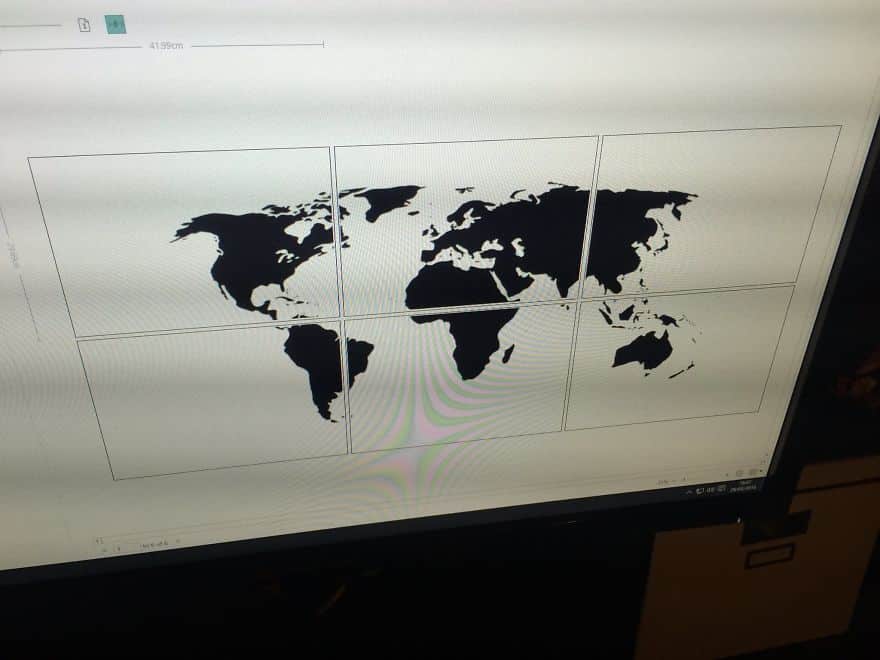 He glued the map to the wood surface of the table… 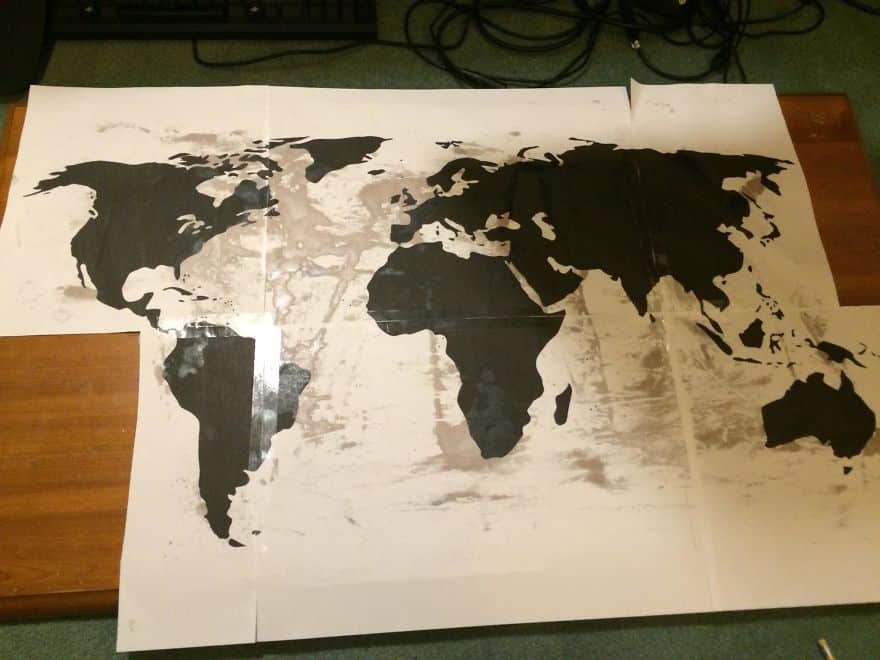 And tracing the outline of the countries and carving it out. Daniel apologizes if he ruined the outline of your country. But hey, we think he did a pretty good job! 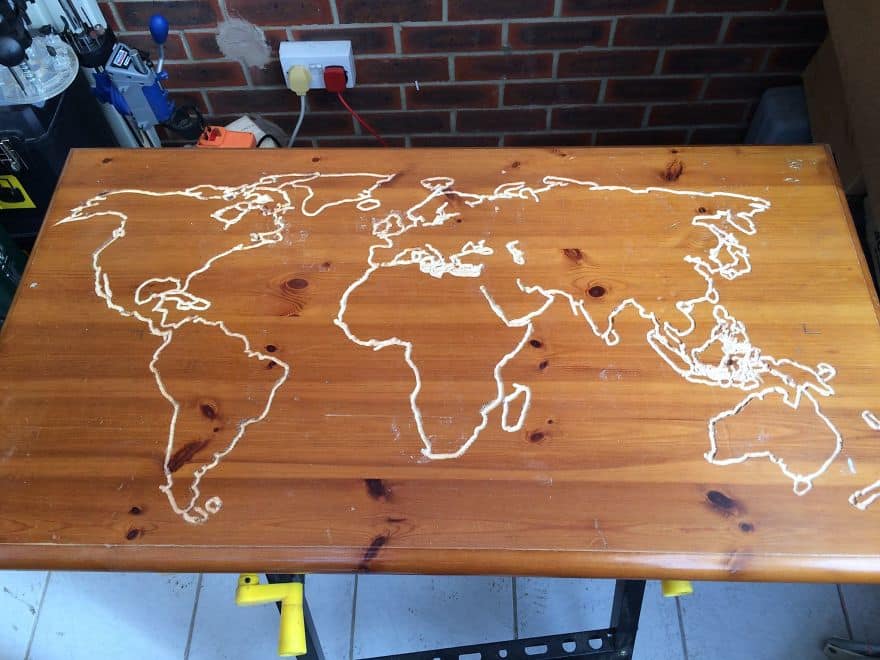 He then used a sander to remove the "seas" so as to leave the countries embossed. It's a pretty time-consuming project, so we guess he did the sanding over the course of a couple of days. 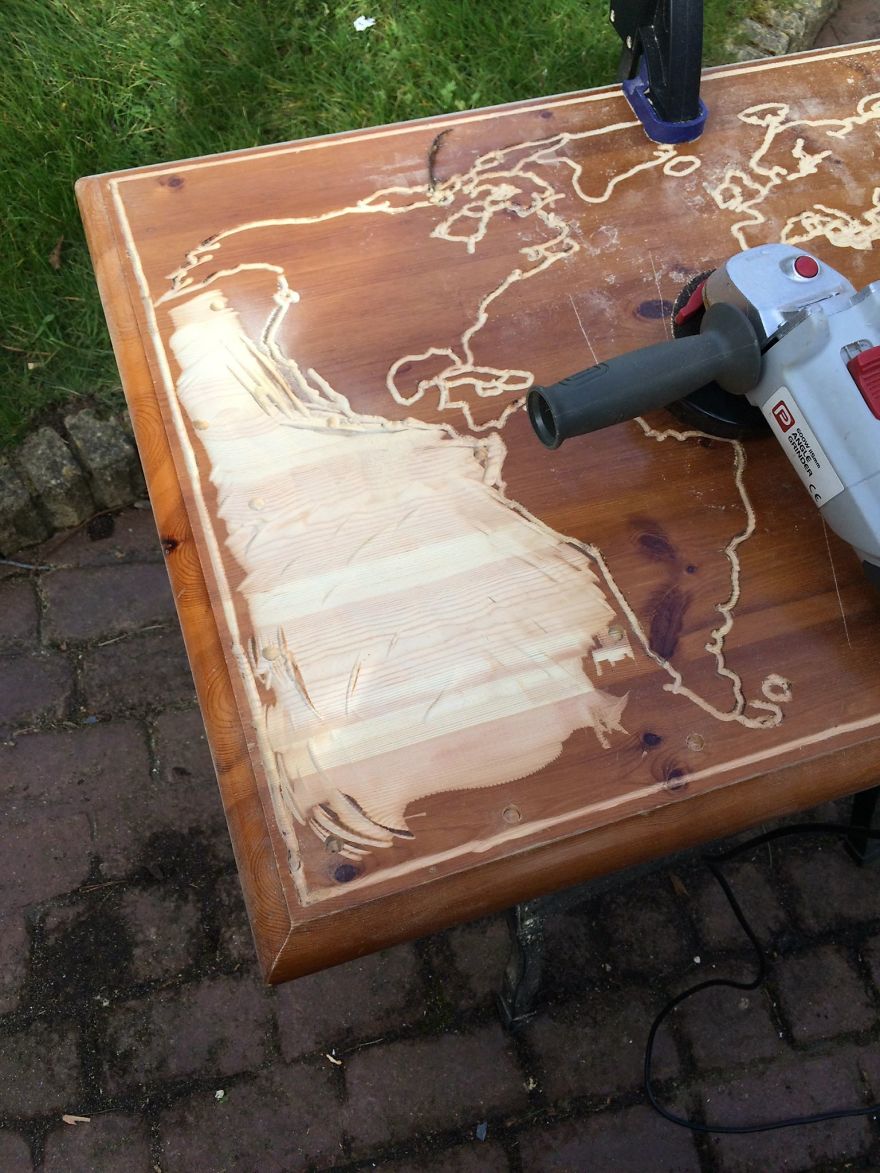 It's particularly tough to sand around smaller countries like Australasia. 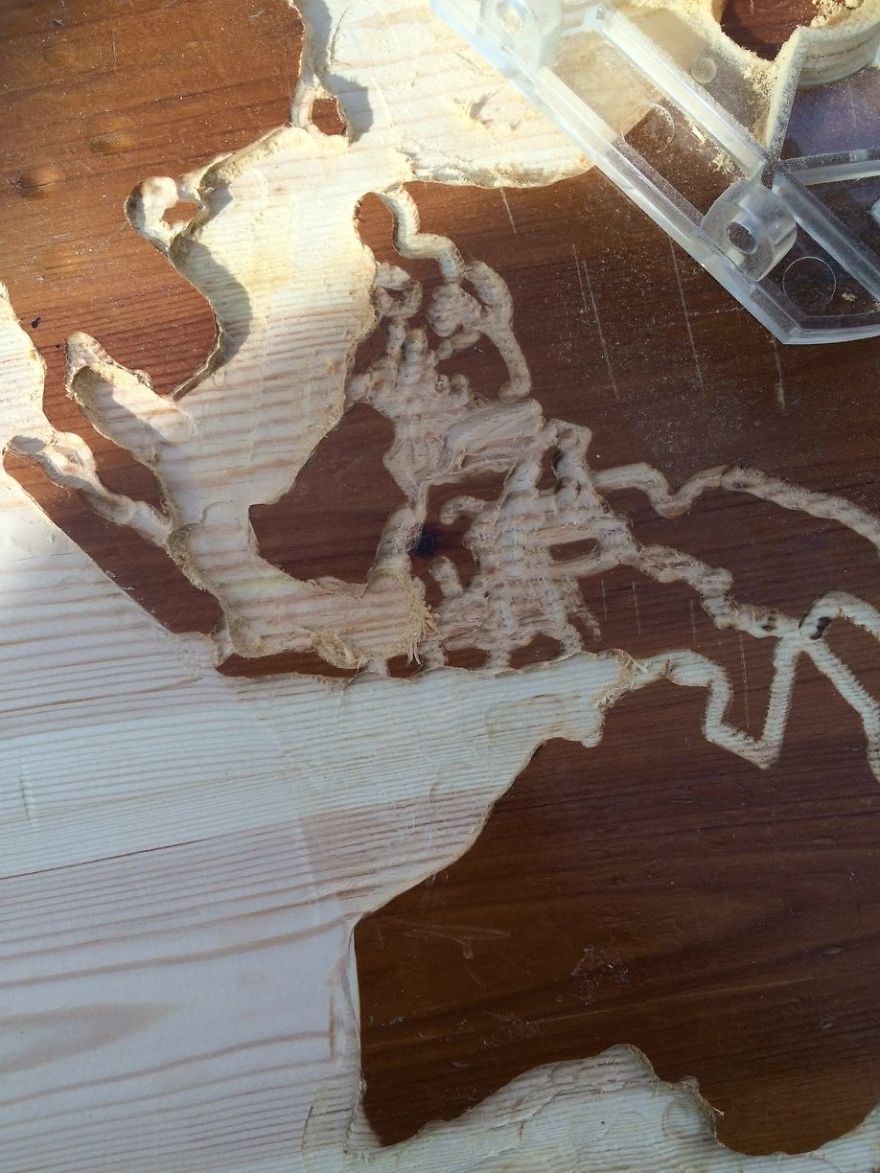 But eventually, Daniel was able to sand the edges of the entire map. 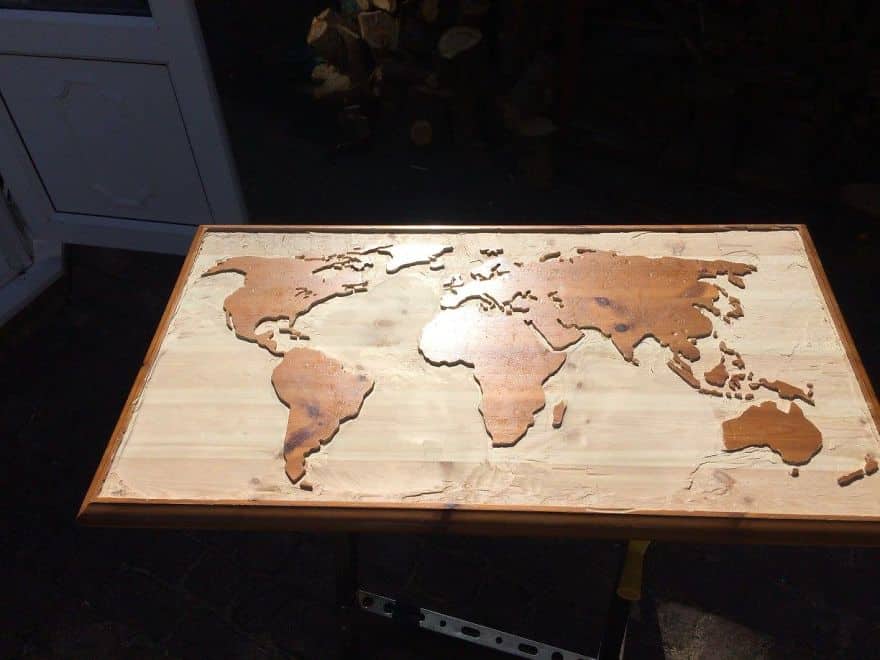 Now on to the legs. Daniel didn't like to original legs, so he replaced them with something more modern. 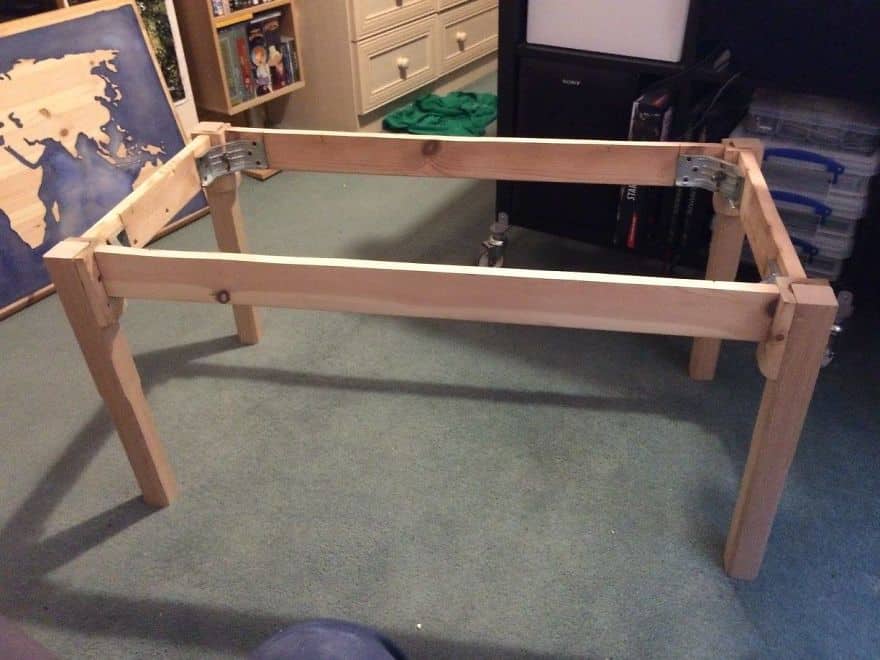 He then painted a blue basecoat for the sea to give the epoxy resin some color. 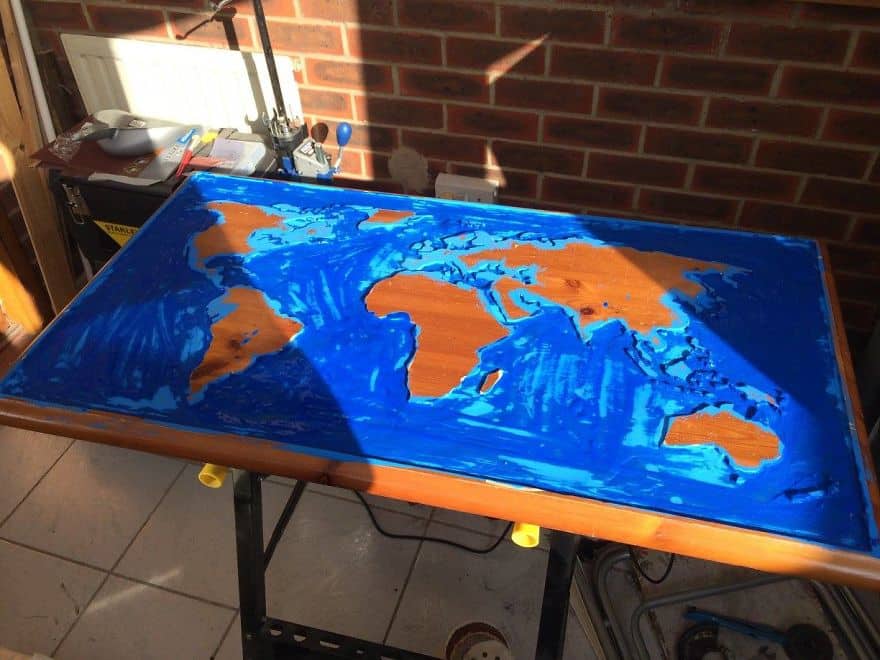 Next comes the glowy part! Daniel got his hands on some glow-in-the-dark powder from Amazon and mixed it in with the epoxy resin before pouring it into the table. 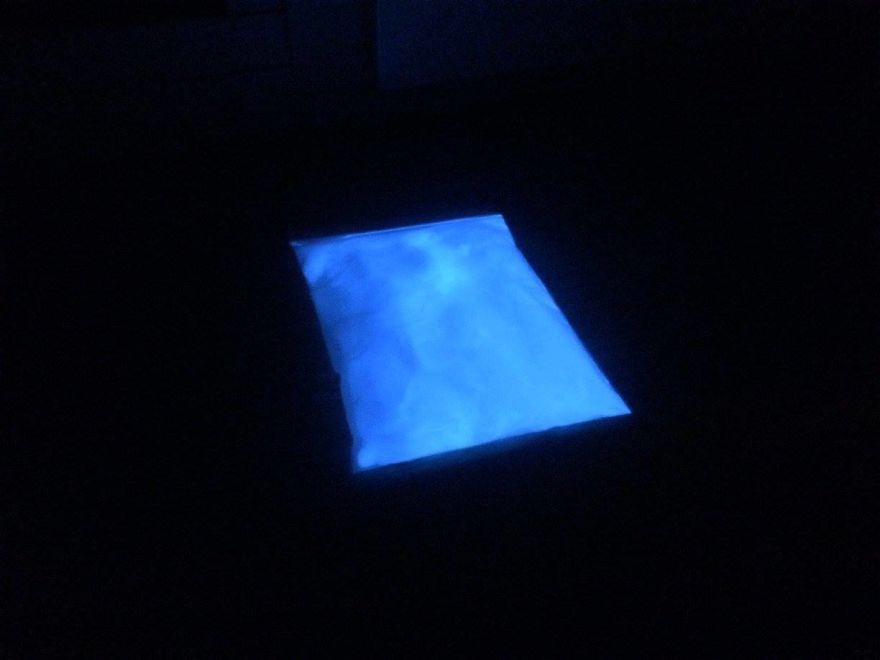 In a fit of panic he also added in as much blue food coloring he could find in an attempt to hide the imperfections. 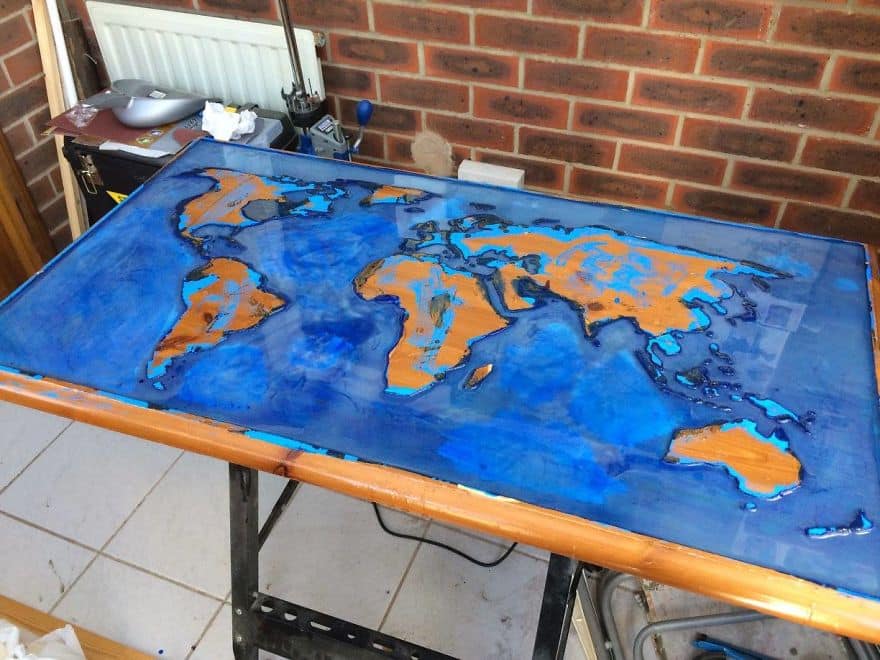 Once it dried up, the color went cloudy in some places, which had a really nice effect. 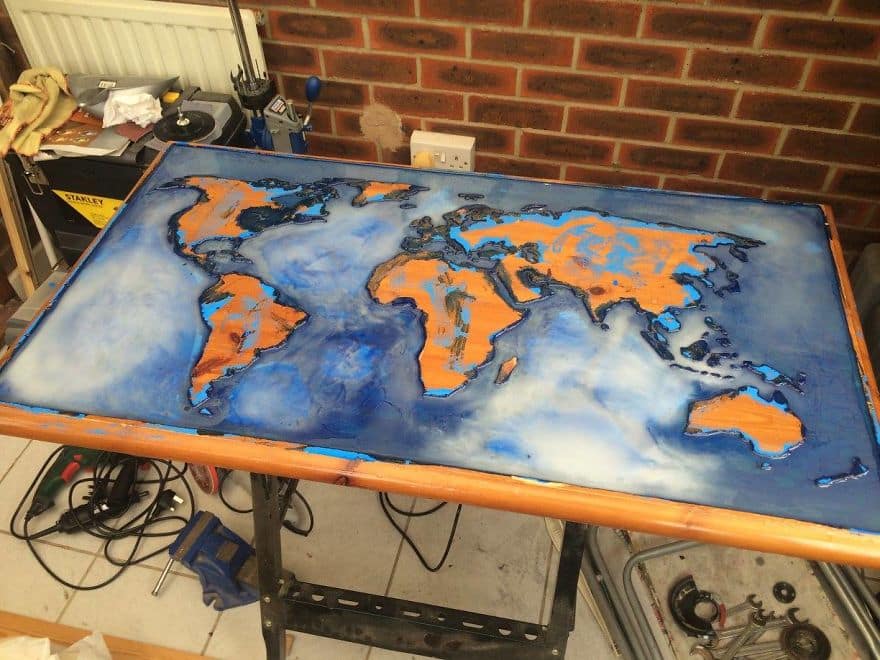 And then he started to sand. 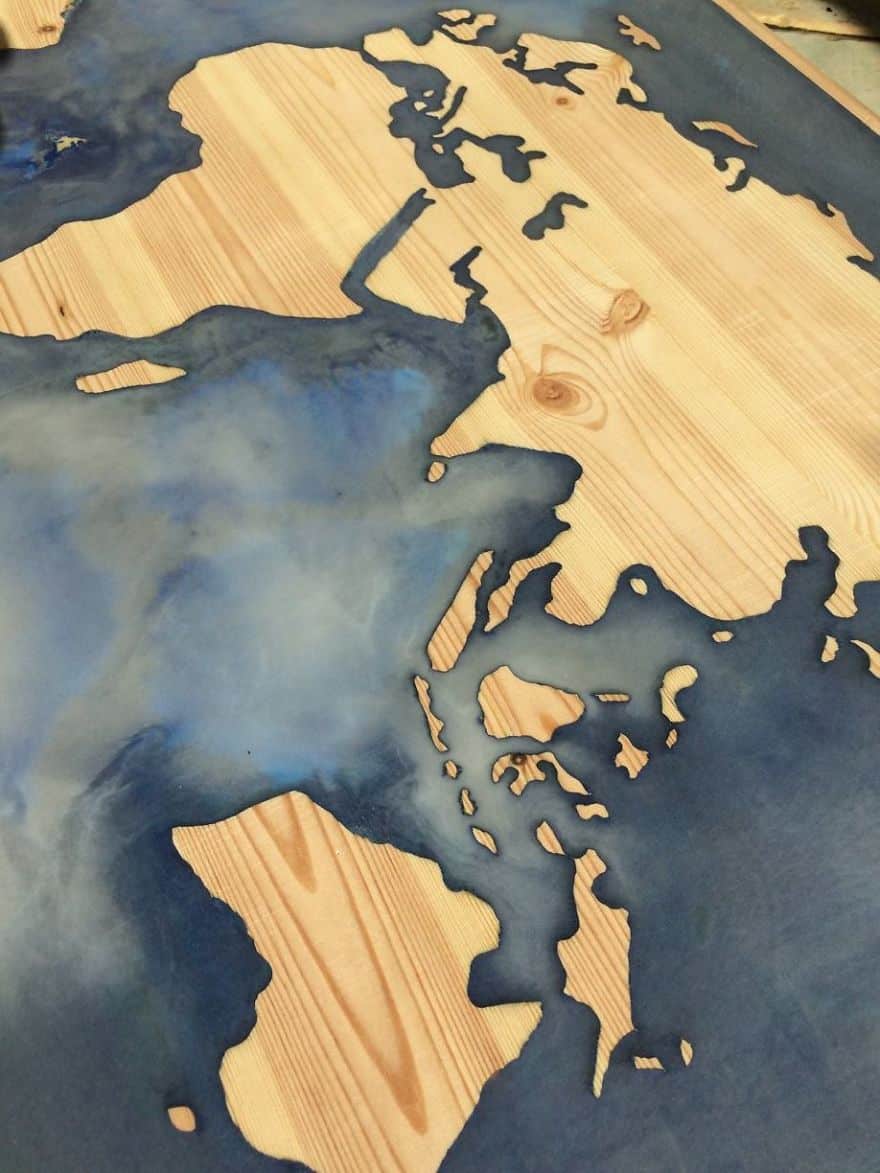 And varnish… And varnish some more. It took him 5 coats of varnish. 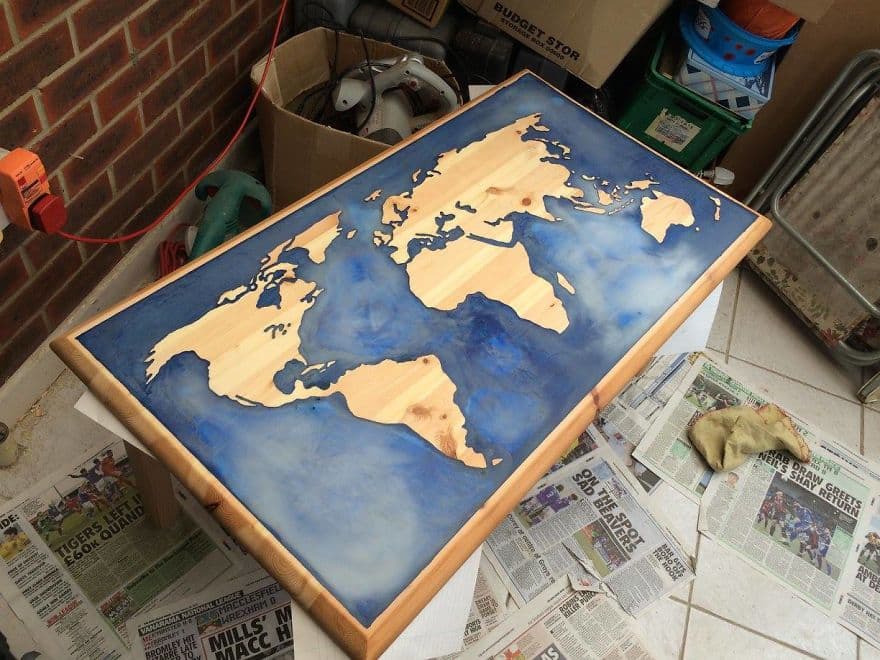 He also added a mechanism to allow the table to be brought up and forward over the knees. 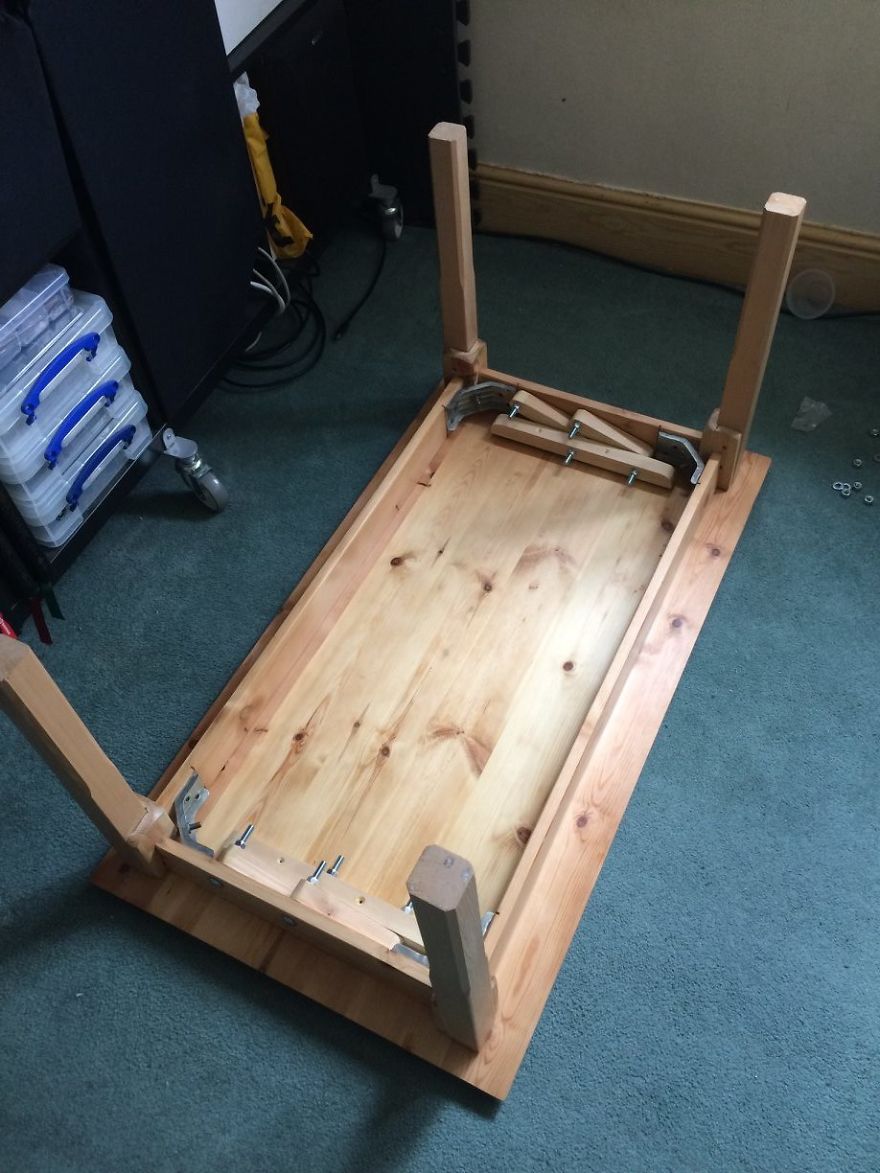 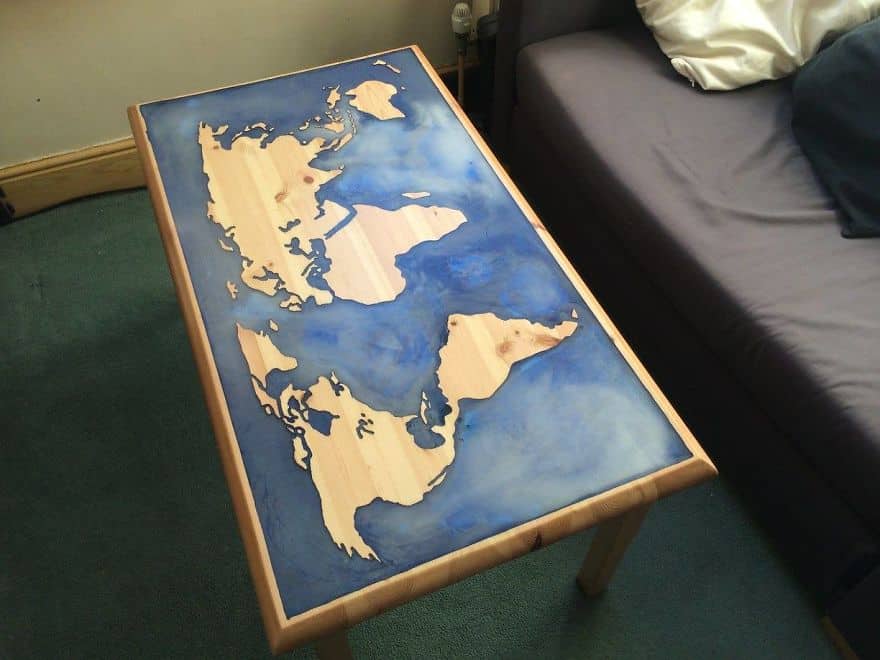 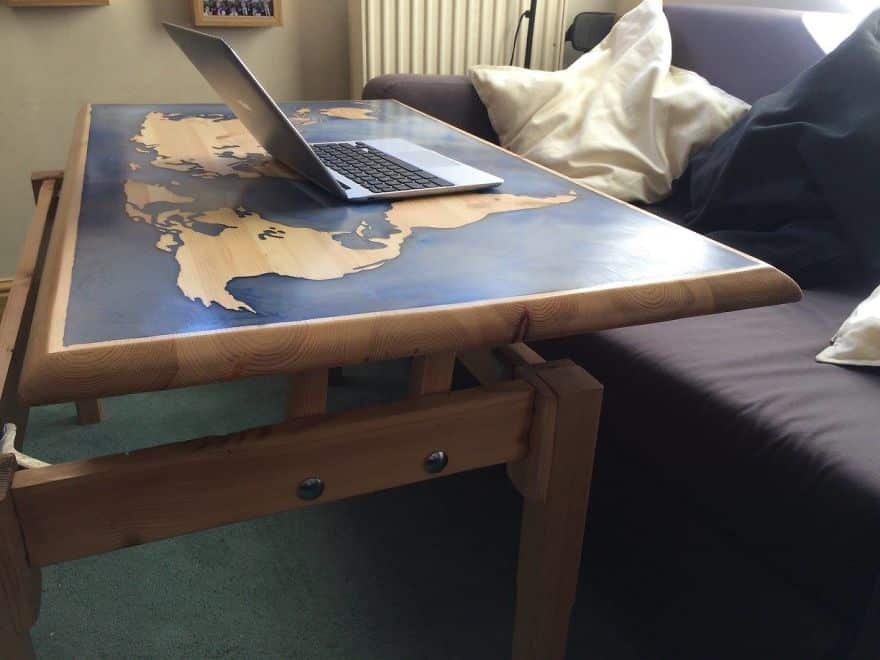 Here's what the glow-in-the-dark table looks like with the lights off. 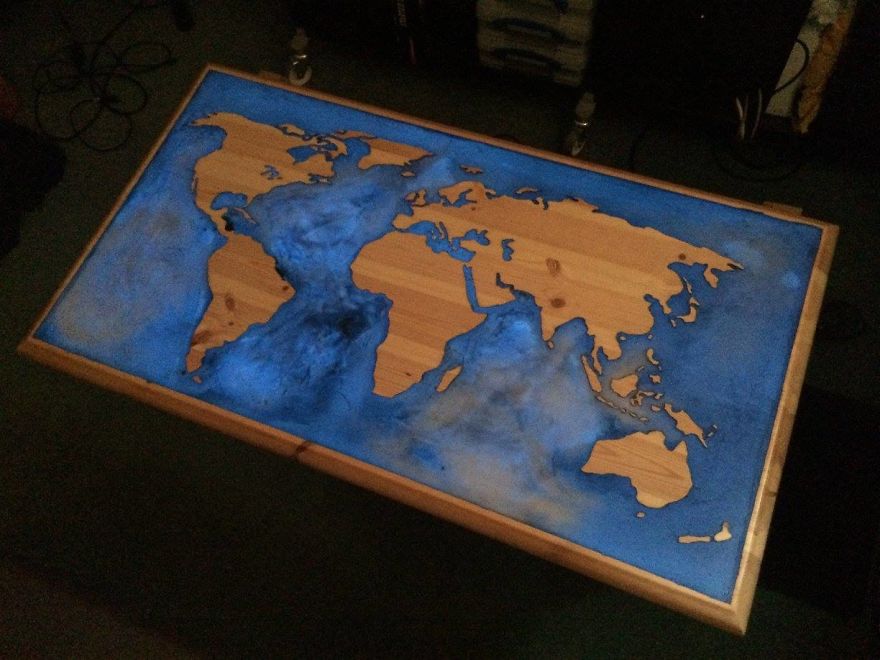 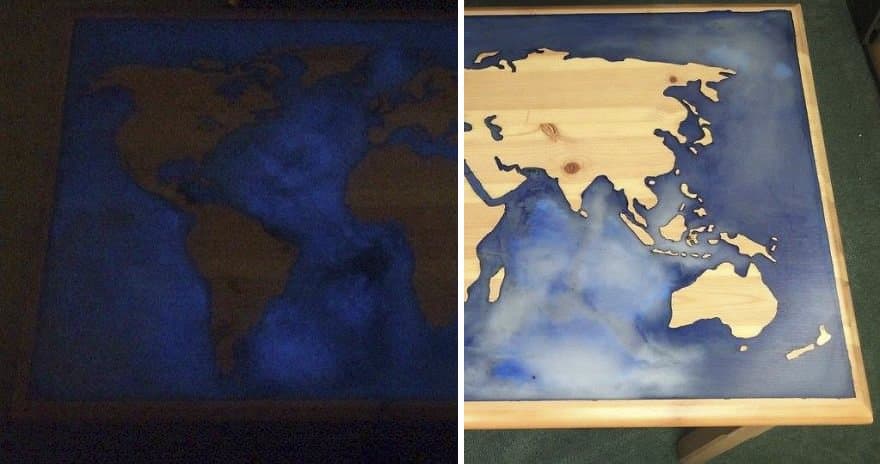 And voila! From an old table to a functional work of art!