Wonders will never cease to amaze us. For the first time in the space history, a 13-petaled orange zinnia has bloomed in zero gravity space. This, despite a rocky start while it was still onboard the International Space Station, on its way to Mars.

U.S. astronaut Scott Kelly proudly tweeted an image of the flower with the caption, “#SpaceFlower out in the sun for the first time! #YearInSpace,” he wrote. Kelly’s tweet has garnered over 9,000 retweets and over 14,000 likes as of this writing. This is a momentous event for everyone in NASA because there is now proof that other life forms are now possible in space. 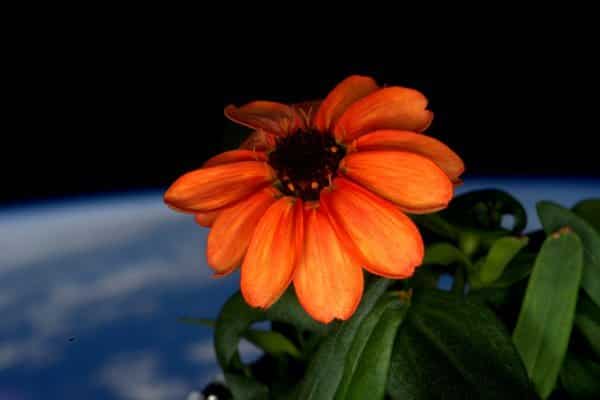 Kelly is even prouder and happier because the flower almost died while in transit to Mars. He had to work hard at keeping the flower and the other plants alive. Last December 27, he tweeted a snap of the plants almost dying. “Our plants aren’t looking too good. Would be a problem on Mars,” he wrote. In a NASA blog post, it was mentioned that the seed containers were leaking and that the roots of the plants were being flooded, hence the almost death.

Kelly wouldn’t have any of it however, so he set out to work to make sure that the plants survived the duration of their space trip until they are planted in Mars. He decided not to follow the schedule for watering of the plants and instead watered them only when he felt it was needed. A few days after, some plants died but a few ones were nurtured back to life.

Back in 1996, NASA astronaut Shannon Lucid successfully grew wheat stalks on the Russian space station while lettuce was grown back in June 2014 on the ISS. This is the first time however that a flower has bloomed in space.