Almost everything now is possible, thanks to technology and the futuristic visions of today’s people. It sounds too ambitious to see floating nations fully operational in the coming years but two teams are now working together to make the world’s first city on sea waters possible.

The Seasteading Institute along with the PayPal founder, Peter Thiel, is envisioning a floating nation to open in the Pacific Ocean, off the island of Tahiti, in 2020. Once approved by the local government and France, which holds the territory, the project will commence construction in 2019 and is expected to see big progress in 2020.

People will see the very first floating nation in the world. 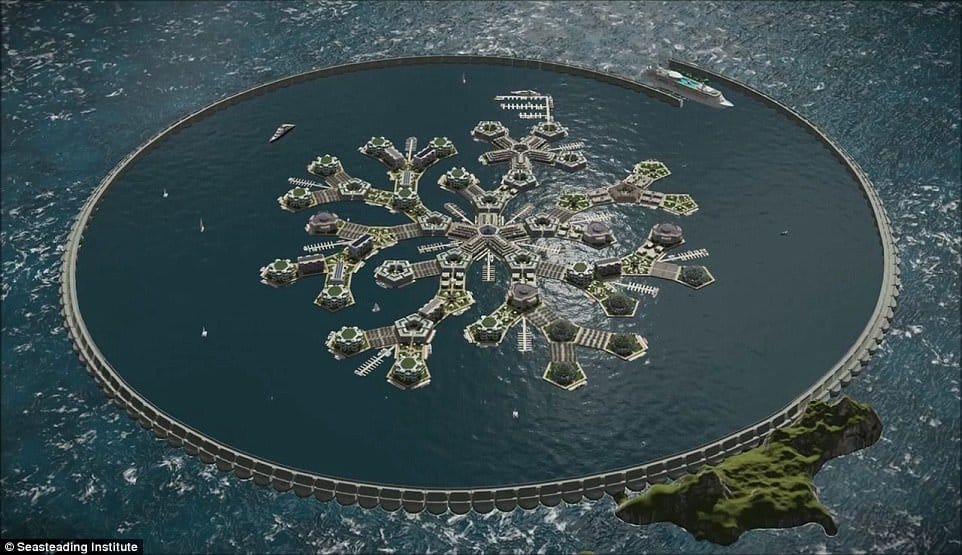 The Seasteading Institute aims to create an independent nation that will operate on its own laws. They also see the nation as an area where they could experiment with new modes of government and agricultural methods.

The plan to build the floating nation was announced by Seasteading Institute in January and the French Polynesian government already gave its approval. In fact, the government is currently structuring a special economic zone so that this floating nation can operate with its own trade laws. However, the group will only get a green light in constructing the futuristic city after it proves to be economically beneficial and environmentally friendly.

The floating city will be built in the Pacific Ocean, off coast of Tahiti. 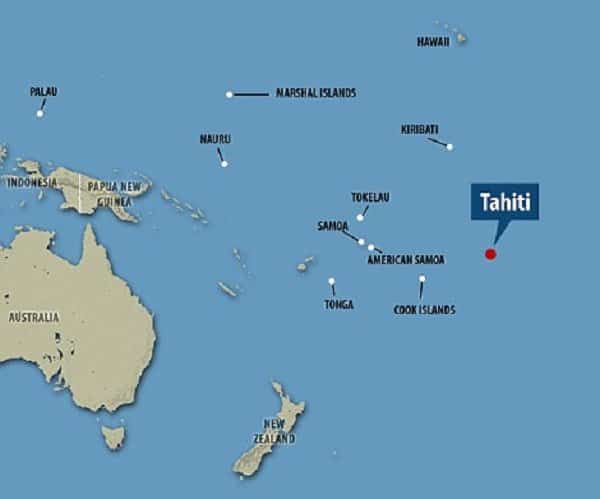 With that said, a handful of hotels, homes, offices, restaurants and other necessary structures will be built in the floating nation to grow its economy. Aquaculture farms, healthcare, medical research facilities, and sustainable energy powerhouses are also to be opened. These structures will feature green roofs covered with vegetation. Contractors are said to use environmental-friendly materials in construction like bamboos, coconut fiber, wood and recycled metal and plastic.

The president of the organization, Joe Quirk, said in an interview that he wants to see not just one but ‘thousands’ of rogue floating nations by 2050, with each of them “offering different ways of governance.” Mr. Quirk even launched the Blue Frontiers which will be responsible for the construction and operation of the floating islands.

And unlike the Palm Island in Dubai, this floating nation will have its own government and will be complete with facilities. 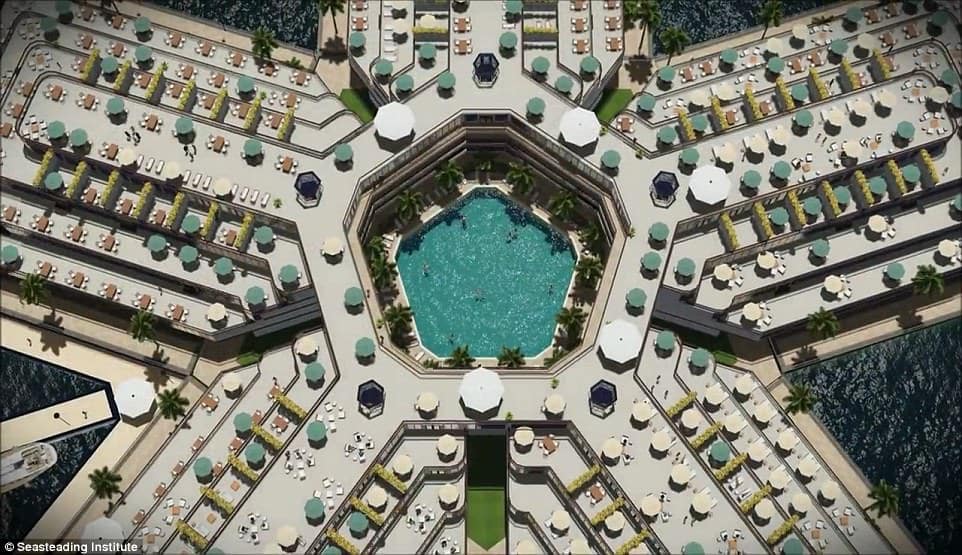 According to reports, the idea was inspired by the Burning Man festival of the United States which Mr. Quirk saw in 2011. He said:

Even if the group admits that the project will be “economically outrageous to afford,” Randolph Hencken, executive director of the institute, said:

“If we can be behind a reef break, then we can design floating platforms that are sufficient for those waters at an affordable cost.
We don’t have to start from scratch as this is a pilot project.

The non-profit hopes to raise around $60 million by 2020 to build a dozen buildings. The floating nation, to be called Seasteading, will be built on a network of 11 rectangular and five-sided platforms, making it possible to be rearranged according to its inhabitants’ needs like a jigsaw puzzle. A feasibility study on this plan was already done by the Dutch engineering firm Deltasync which said can use square and pentagon platforms measuring 164 ft (50 meters) in length and 164 ft-tall (50 meters) sides to protect the buildings and its residents.

And for those who are worried about safety,the city will be guarded from the harsh waves of the Pacific Ocean with strong, concrete panels. 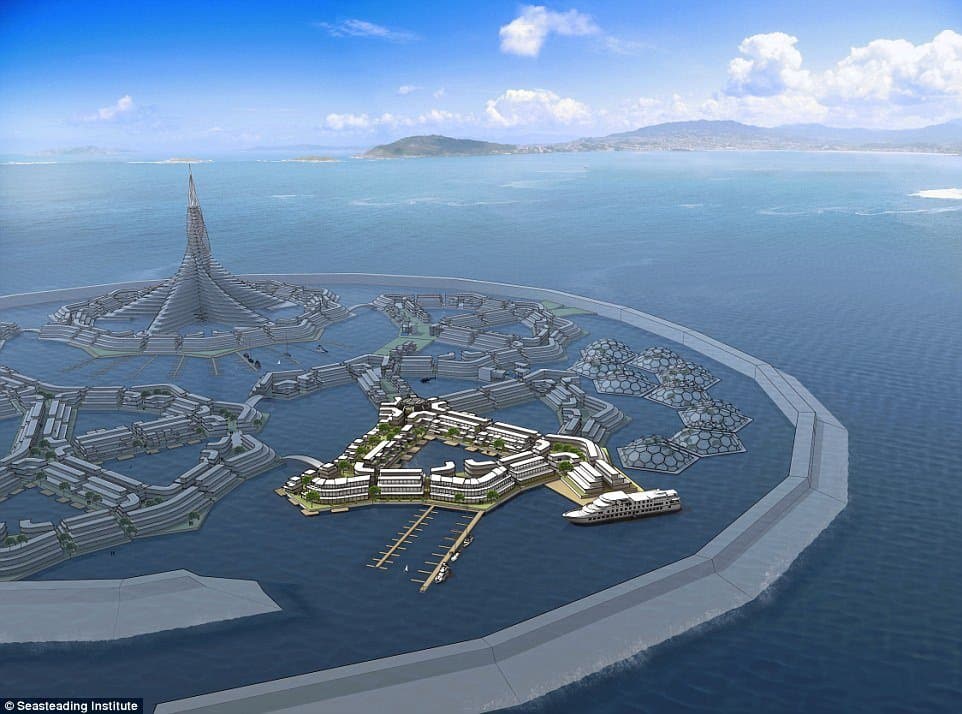 The platforms will be made from reinforced concrete which will support three-story buildings such as apartments, terraces, offices, and hotels and is expected to last for up to 100 years. The feasibility report claims the project is economically feasible with each of these platforms costing less than $15 million, resulting in an overall cost of $167 million.

The floating city will open up to an initial population of 250 to 300 people was originally planned to be situated on international waters until the institution came up to a decision to build it just off the coast. Choosing the location is said to allow the residents to go onshore to acquire goods, give it extra shelter from the storm and better legal protection.

“Our in-house team is now actively engaged in diplomacy with host nations, making the case that hosting an autonomous seastead city in their territorial waters would produce significant economic, social and environmental benefits for their citizens.”

See more photos of the concept design of the Seasteading Floating Nation below. 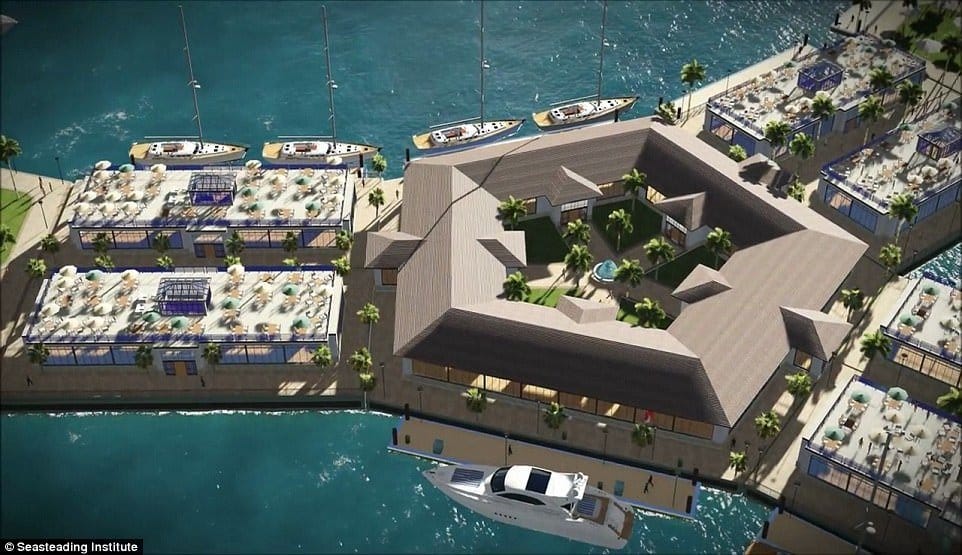 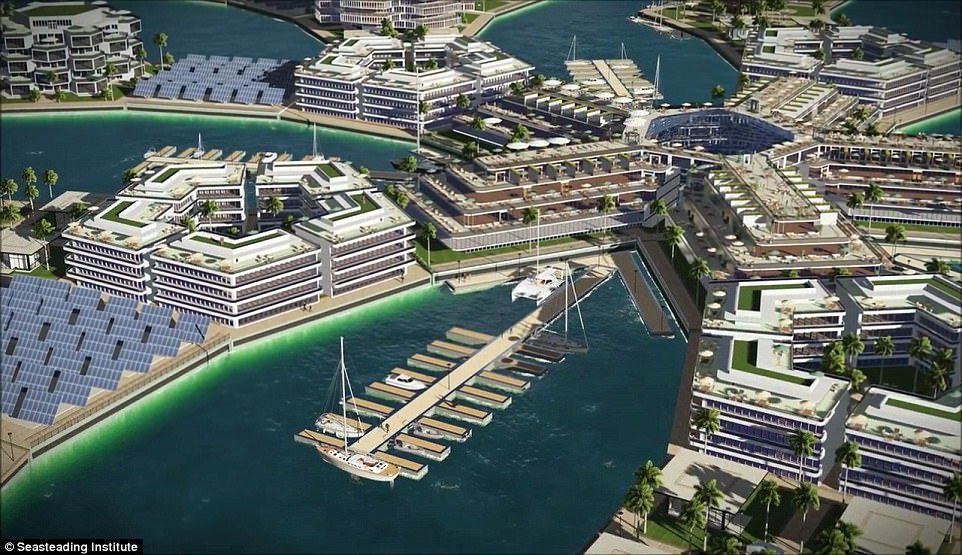 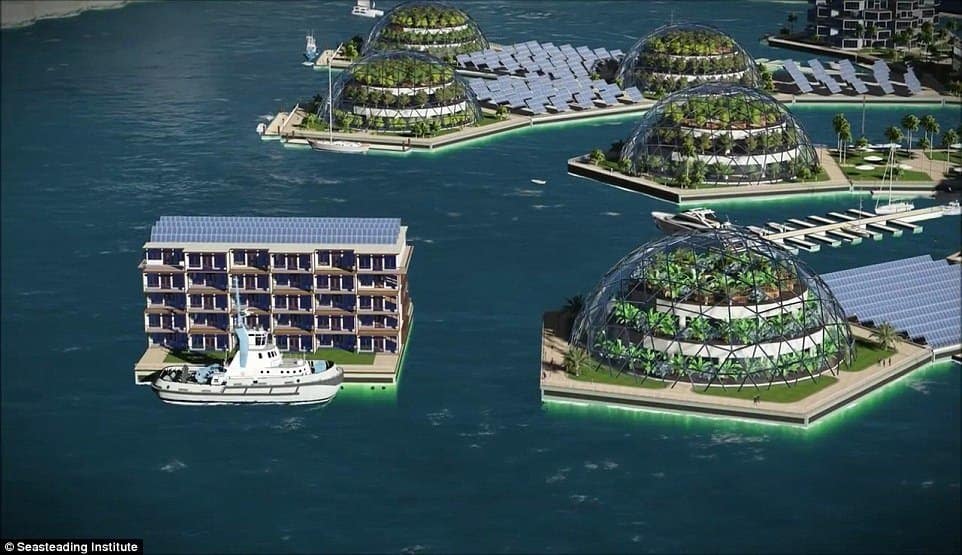 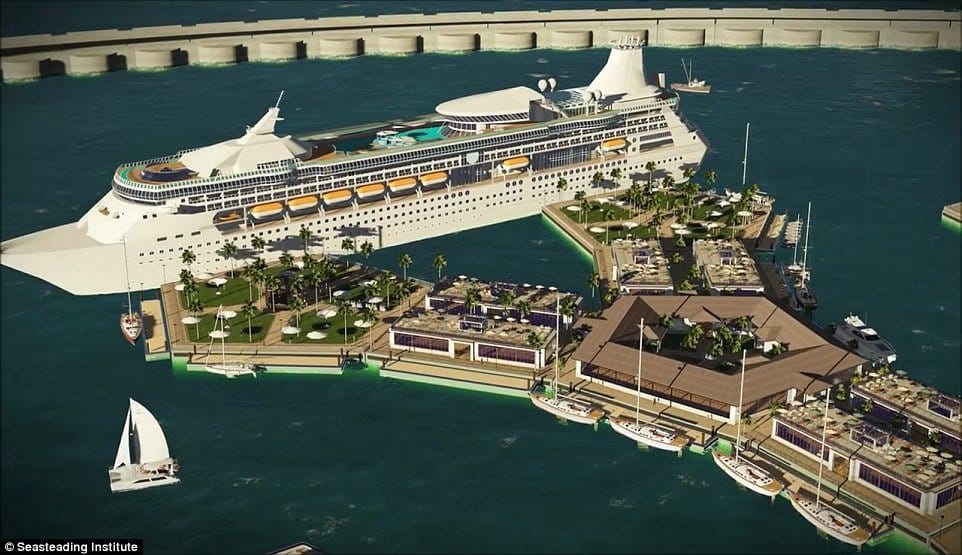 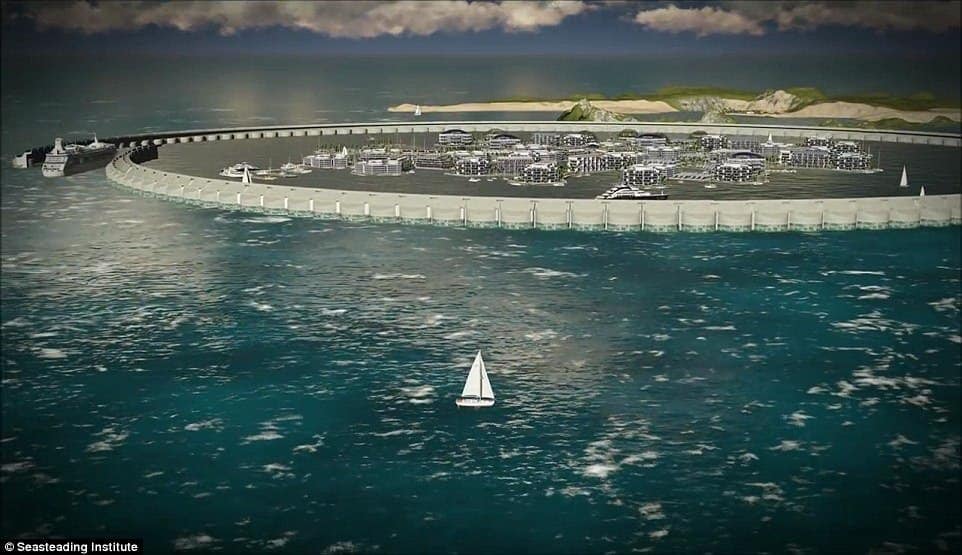 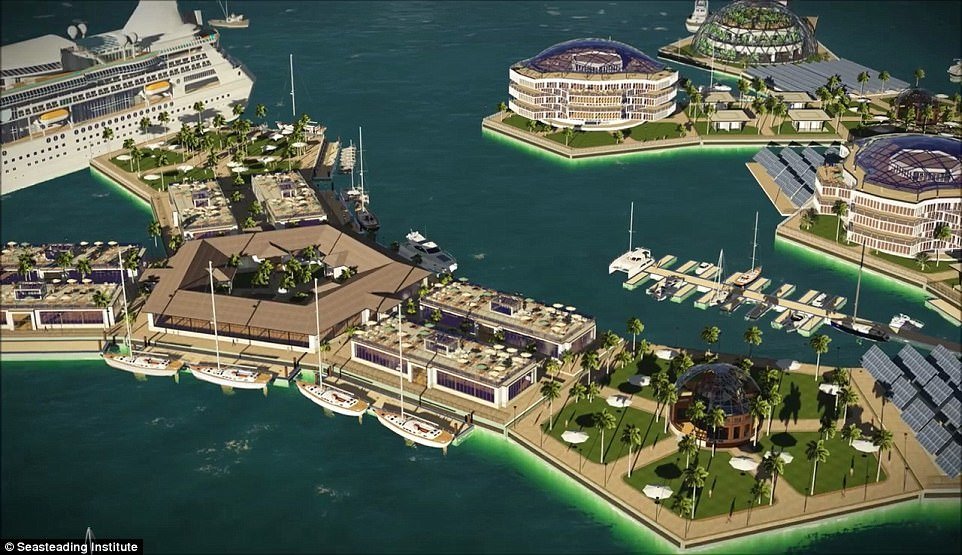