Creative individuals usually vary in their preferred tools as they produce their own brands of art.

Some artists love the idea of using paint brushes and canvases while there are those who prefer carving on wood. Others use cameras in their crafts while some make wonderful artworks with watercolors.

It all really depends on what an artist is more comfortable with. More important than the tools is the satisfaction that he or she gets after seeing the finished piece.

Well actually, that’s what makes artist Stefan Kuhnigk unique among his peers. What sets this guy apart from others is his unusual medium – pen, paper, coffee, and a lot of creativity.

And yes, the coffee is really a part of his arsenal. Aside from consuming it to stay awake, he spills a few drops of the beverage on paper and draws cute monster characters around the coffee stains. It’s really awesome!

Here are some of his caffeinated creations along with excerpts from his quirky captions. Enjoy! 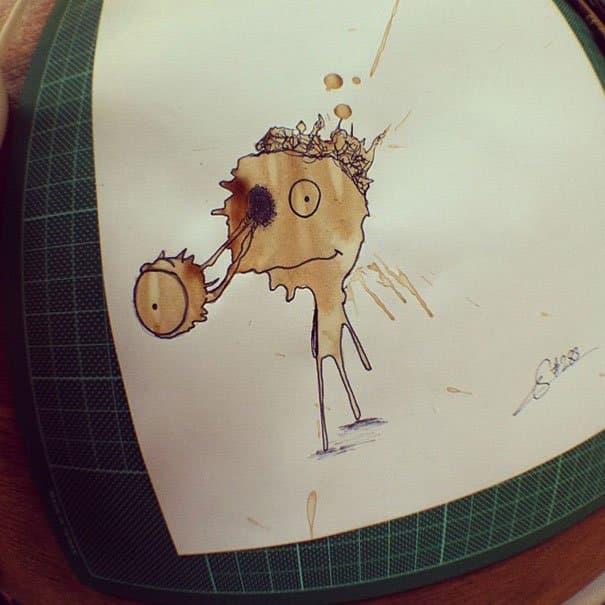 “One morning coffee-frog Paul had to cross a road.” 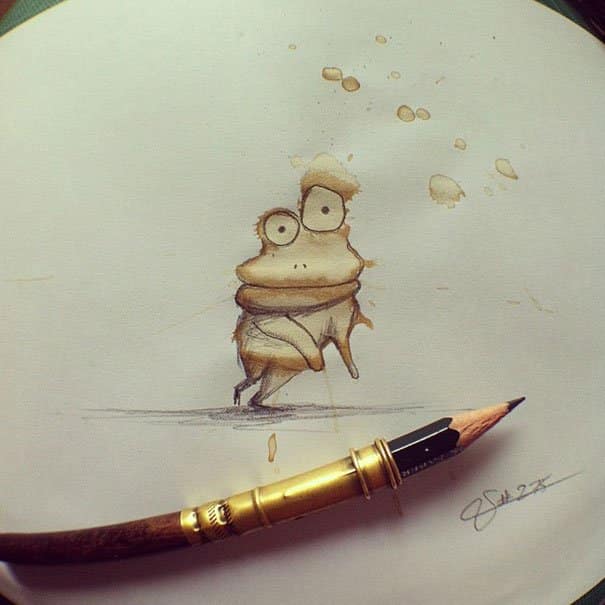 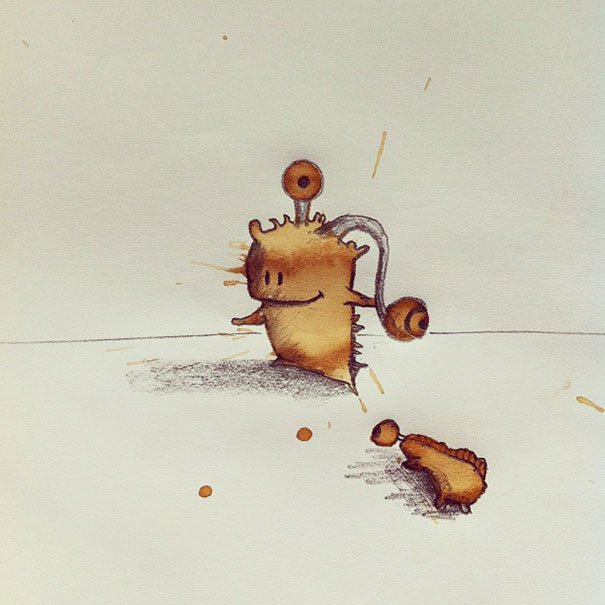 “While Bobby was spectating what was going on behind his back, he decided to take a look on what was lying in front of him.” 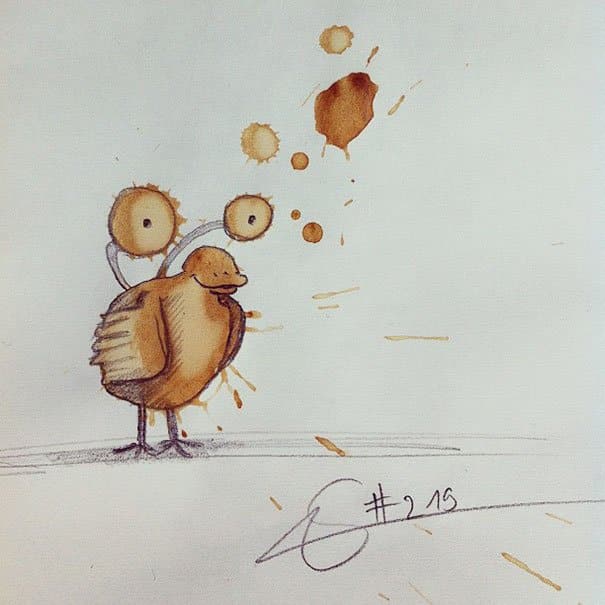 One of Stefan’s earliest coffeemonsters 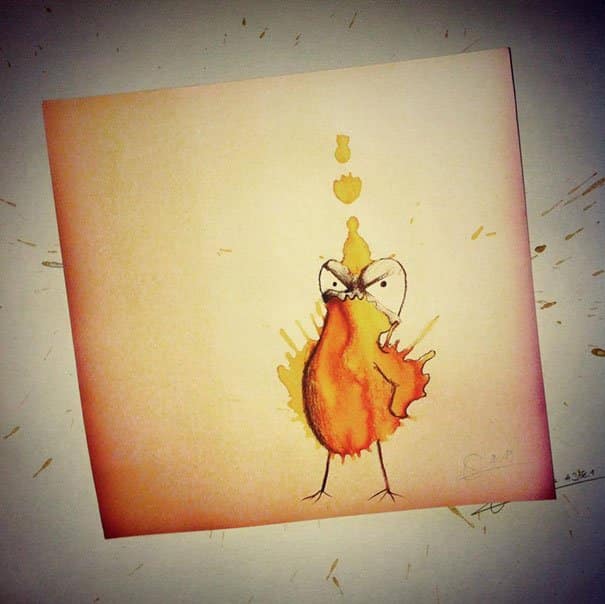 “Fiiiiiiiiiireeeeeee! This monster is clearly on fire.” 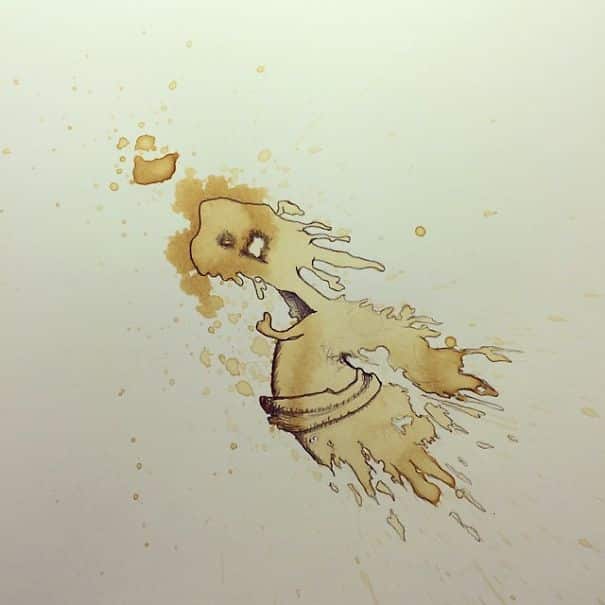 “It tried to get up early but was late anyways. “ 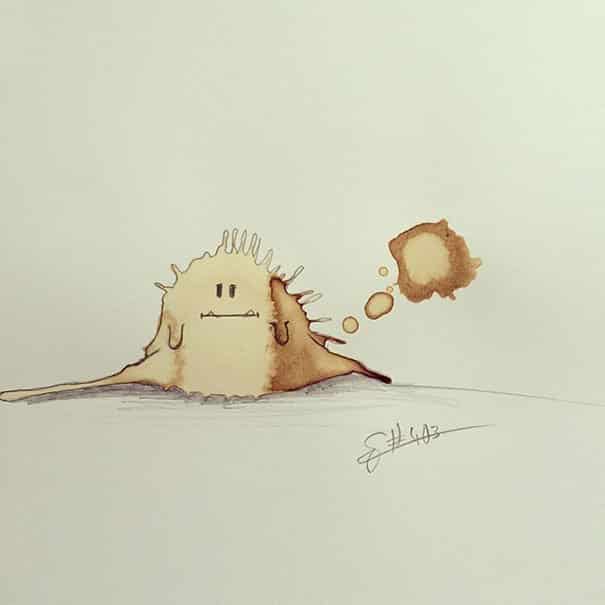 “Jumping on one finger.” 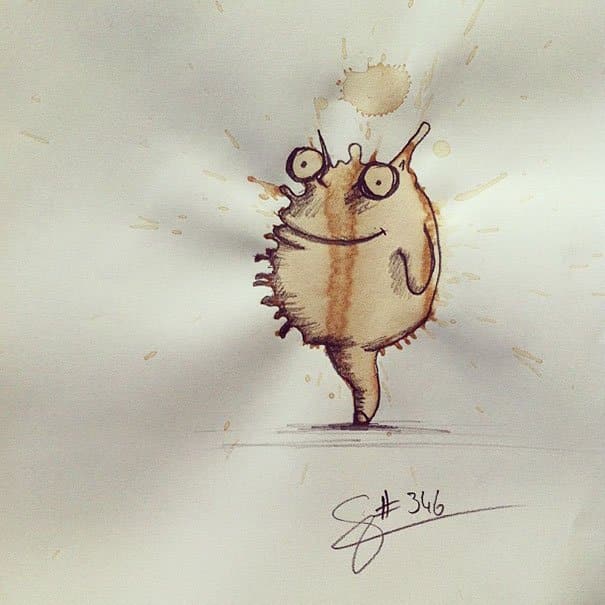 “4 eyes are better than two – because hunting humans is hard. “ 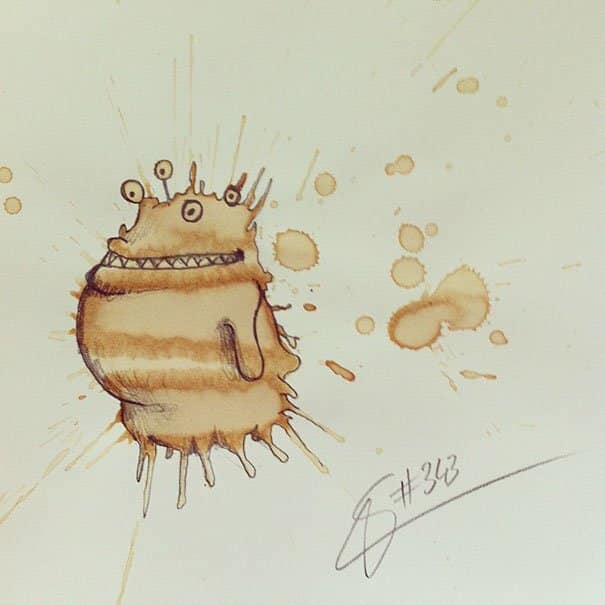 According to Stefan, he accidentally “spilled a cup of coffee” one day and he thought he saw a monster-shaped figure there. He drew it and then the next day, he straightway decided to “do it daily, just to be creative everyday.”

He eventually set up a website and a Facebook page to showcase his creations. Currently, he already has 490 of these cuties and he has no plans of stopping anytime soon.

“This monster clearly has got a message for you: Fu!” 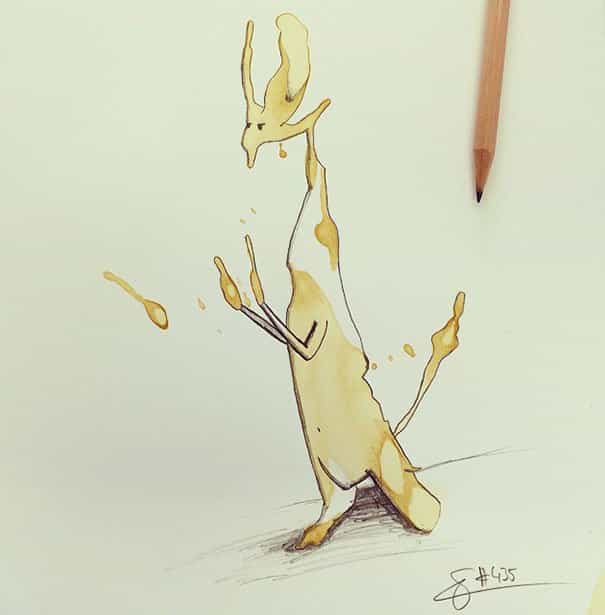 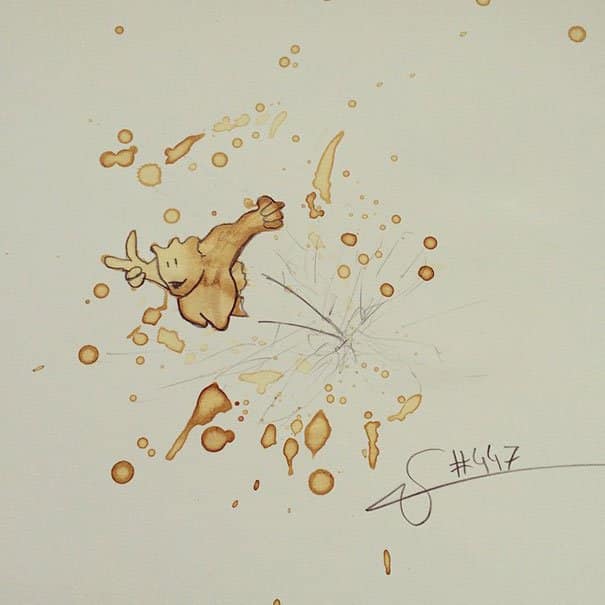 “The sleep embraced him for too long.” 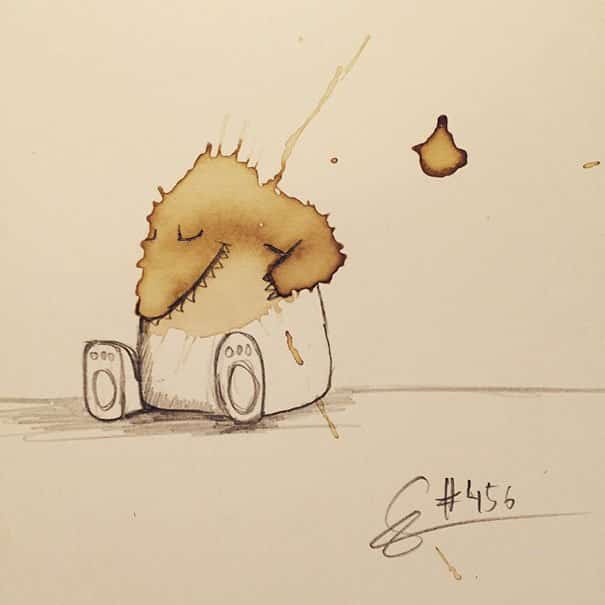 “Fishorman lost his heart and tried to hold it in his chest.” 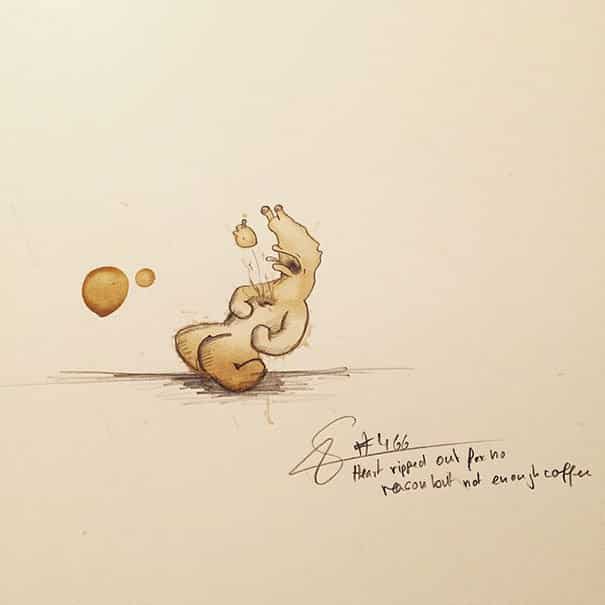 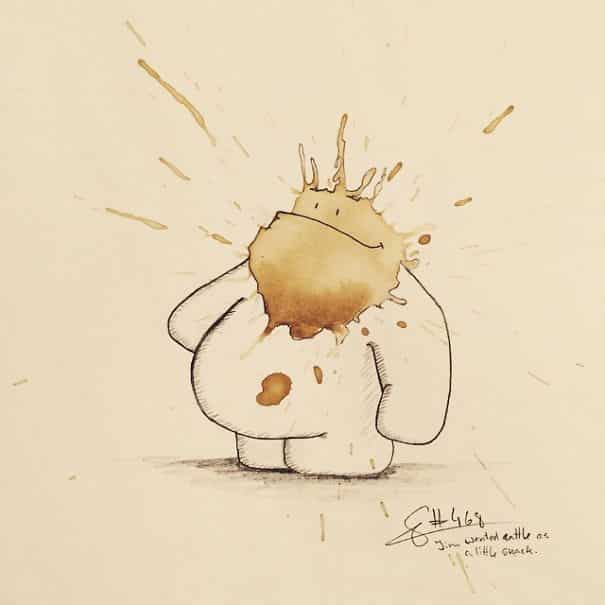 “Here is a piggy monster, ready to fetch a to be thrown ball.” 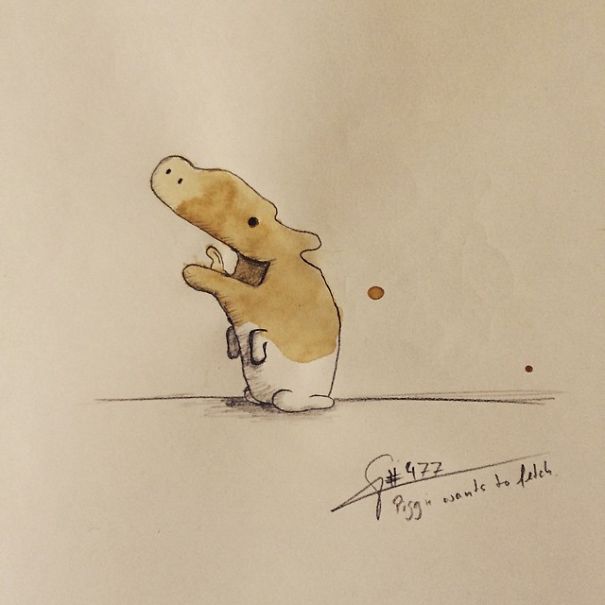 “Jumping around with Leo! Whoooo.” 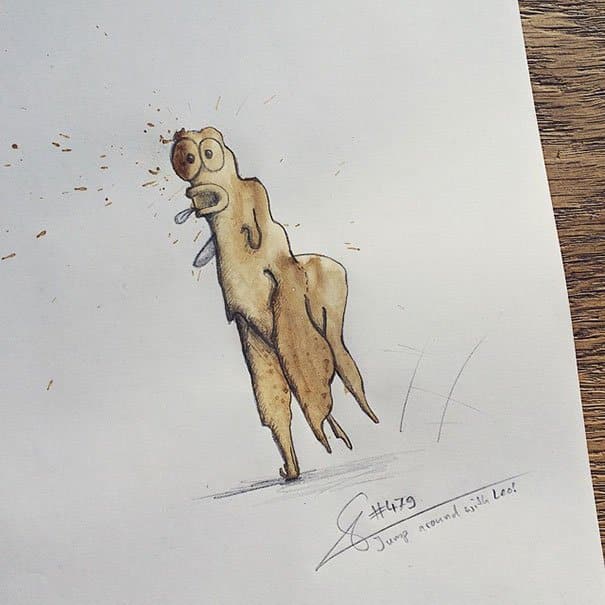 “This monster is so sweet, it would just eat you right away.” 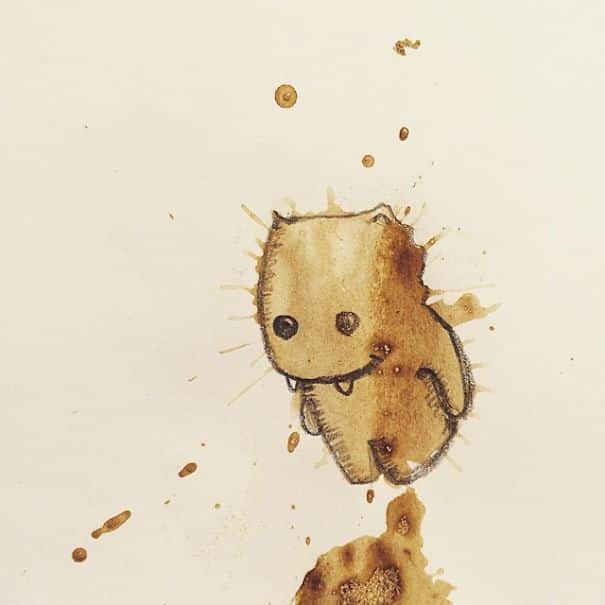 “It never gets old for me, because a spill is never the same. The coffeemonsters are my way of expressing my love for comics, coffee and randomness,” he said.

Also, the German artist-slash-copywriter gets motivation from his online fans. “My favorite moment up until now was, when someone wrote me, that the monsters make her happy everyday. This is so cheerful and because of messages like that I do it again and again.”