They say that when a couple is having good relationship they are usually having a healthy sex life too, because sex brings the couple closer together.

Sex is a unique way of expressing intimacy, love and passion to your spouse at the same time it’s good for the health since it burns calories and increases heart rate. Sex is fun and it’s about connecting deeply without actually speaking. It can also improve self esteem because it helps to make you feel more feminine or masculine.

However, it’s not surprising that being exhausted is getting in the way of people having sex on a regular basis; taking care of the kids, running errands, doing chores and working all at the same time can be really so tiring and perhaps this is a real and big concern for many couples.

This hilarious spreadsheet went viral as soon as it was posted on Reddit. 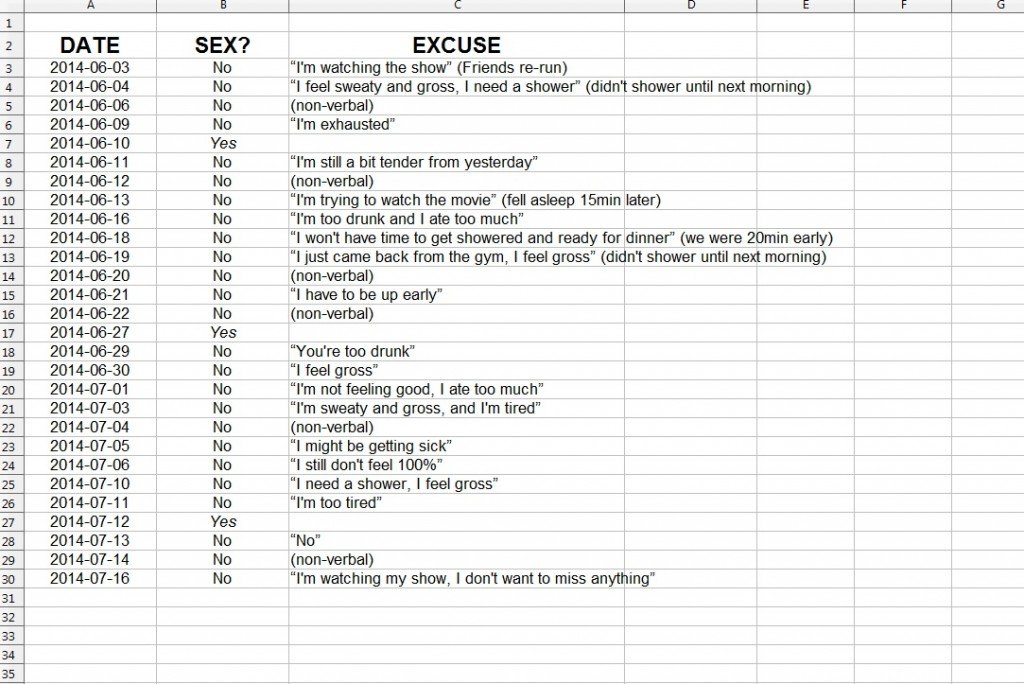 The wife under the username throwwwwaway29 shared the spreadsheet to Reddit, she said,

“Yesterday morning, while in a taxi on the way to the airport, Husband sends a message to my work email which is connected to my phone. He’s never done this, we always communicate in person or by text. I open it up, and it’s a sarcastic diatribe basically saying he won’t miss me for the 10 days I’m gone. Attached is a SPREADSHEET of all the times he has tried to initiate sex since June 1st, with a column for my ‘excuses,’ using verbatim quotes of why I didn’t feel like having sex at that very moment. According to his ‘document’, we’ve only had sex 3 times in the last 7 weeks, out of 27 ‘attempts’ on his part.”

Check Out the Video Here:

Some readers sided with the husband; one even commented and said,

“[I]f someone refused to have sex with me over & over & over again despite my repeated attempts, culminating in them only agreeing to it 3 times in 7 weeks, and they used the same excuses each time, excuses which could be easily remedied, it would make me feel like they didn’t want me anywhere near them.”

While some users sided with the wife; one user said,

“If someone had constructed a spreadsheet of reasons why I wouldn’t have sex with them, it would make me instantly want to pounce on their c–k and worship them like the god of sex they clearly are, No wait — it would make me feel nauseous and like I didn’t want them anywhere near me. That’s beyond pathetic.”

Regardless of who is right and wrong, immature or not, I guess they have to settle this issue and talk to each other. Maybe they can set a schedule for their “sex night”. This spreadsheet thing is just plain hilarious, perhaps this sends a clear signal on how badly he missed having sex!