A young investment banker goes out and buys the car of his dreams – a brand new Ferrari GTO. After paying $500,000, he takes it out for a spin and stops at a red light. While waiting for the light to change, an frail looking old man on a yellow moped pulls up next to him. The old man looks over at the Ferrari and asks, “What kind of car ya’ got there, Sonny?”

The young man replies, “A Ferrari GTO. It cost half a million dollars!”

“Wheeewee… that’s a lot of money,” says the old man as he tucks his thumbs up against his suspenders. “Why does it cost so much?”

“Because this car can do up to 320 miles an hour!” states the banker proudly.

The moped driver asks, “Mind if I take a look inside?”

“No problem,” replies the proud new owner. So the old man pokes his head in the window and looks around at all the bells and whistles lining the dashboard. Sitting back on his moped, the old man whistles and says, “That’s a pretty nice car, all right… but I’ll stick with my moped!” 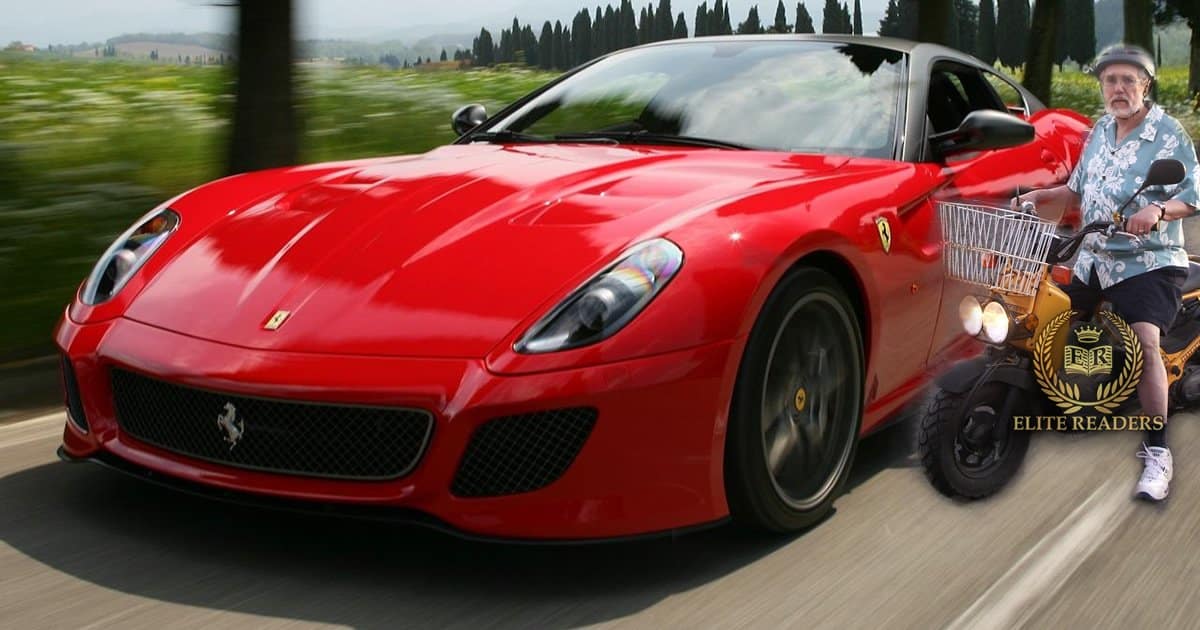 Just then the light changes, so the banker decides to show the old man just what his car can do. He floors it, and within 30 seconds, the speedometer reads 160 mph! Suddenly, he notices a yellow dot in his rear view mirror. It seems to be getting closer! He slows down to see what it could be, and suddenly… Whoooooosssshhhhh! Something blows by him, going much faster!

“What in the hell could be going faster than my Ferrari?” the young man asks himself. He floors the accelerator and takes the Ferrari up to 250 mph. Then, up ahead of him, he sees that it’s the old man on the moped! Amazed that the moped could pass his Ferrari, he gives it more gas and passes the moped at 275 mph. Whoooooosssshhhhh!

He’s feeling pretty good until he looks in his mirror and sees the old man gaining on him again! Dumbfounded, the banker floors the gas pedal and takes the Ferrari all the way up to 320 mph. Not ten seconds later, he sees the moped bearing down on him again!

The Ferrari red lines and there’s nothing more he can do! Suddenly, the moped plows into the back of his Ferrari, demolishing the rear end. The young man stops and jumps out, and unbelievably, the old man is still alive. He runs up to the mangled old man and says, “Oh my God! Is there anything I can do for you?” The old man whispers with his dying breath… “Unhook… my… suspenders… from… your…. side view mirror.”