This is a perfect example of what intimidation can do in fights. These shocking photos show the intense moment a defiant guard dog stood up against a polar bear more than ten times its size and WON. 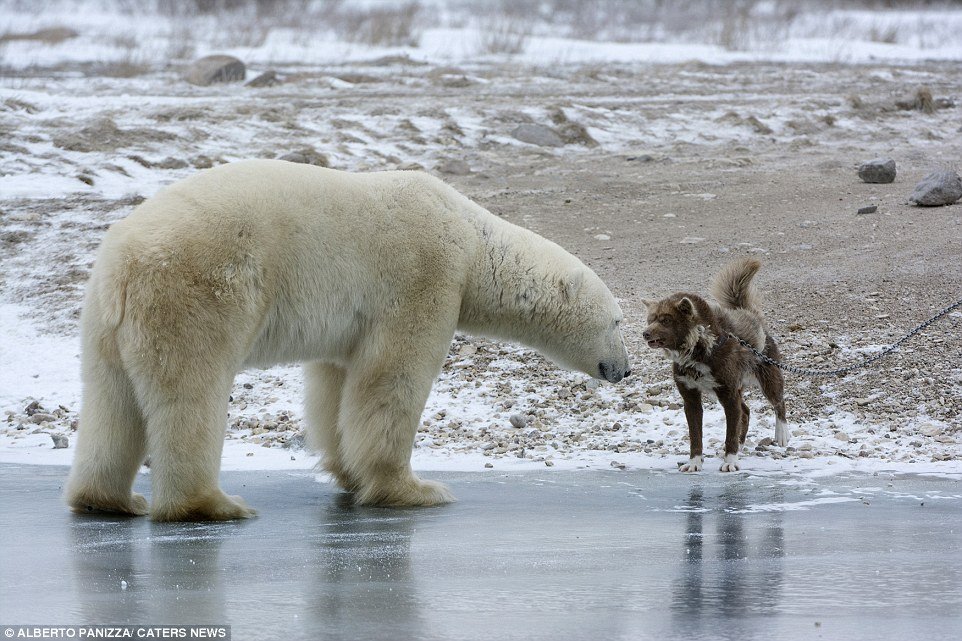 The brave dog began snarling in an angry frenzy as an adult polar bear – which can weigh up to 1,500 pounds – approached. The furious mutt either forgot he was a dog or simply did not know what the term size difference means.

But sensing danger, the dog stands up to the huge bear and goes into a startled frenzy in a bid to scare it away. 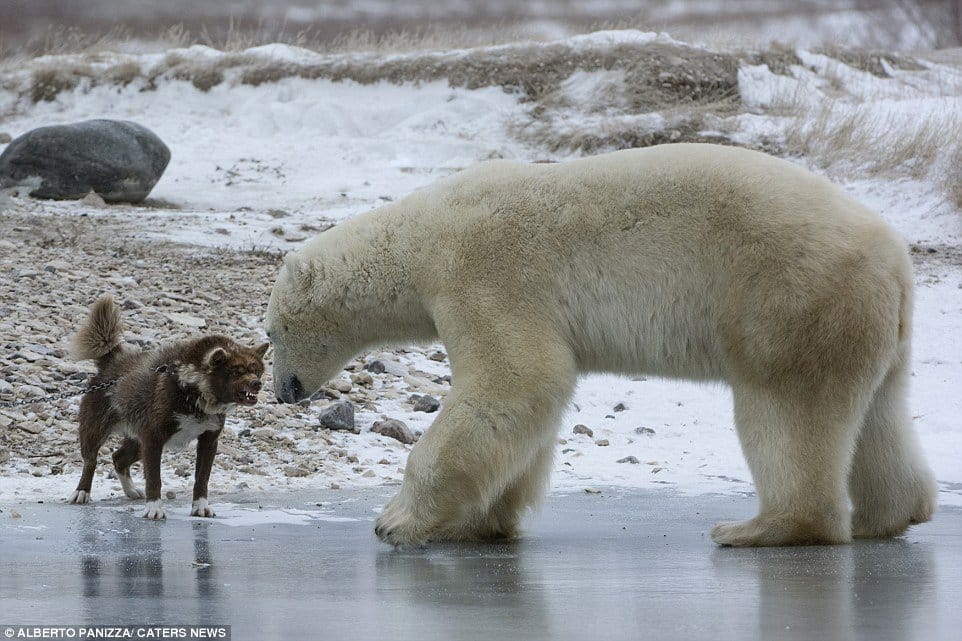 The series of staggering photos was captured by Italian photographer Alberto Panizza who caught the remarkable face-off between a fully grown, adult polar bear and a brave guard dog in the cold wilderness of Churchill in Manitoba, Canada.

The dog, whose job it is to pull sleds through the snow in Churchill, Canada, continues to try and scare off the animal. 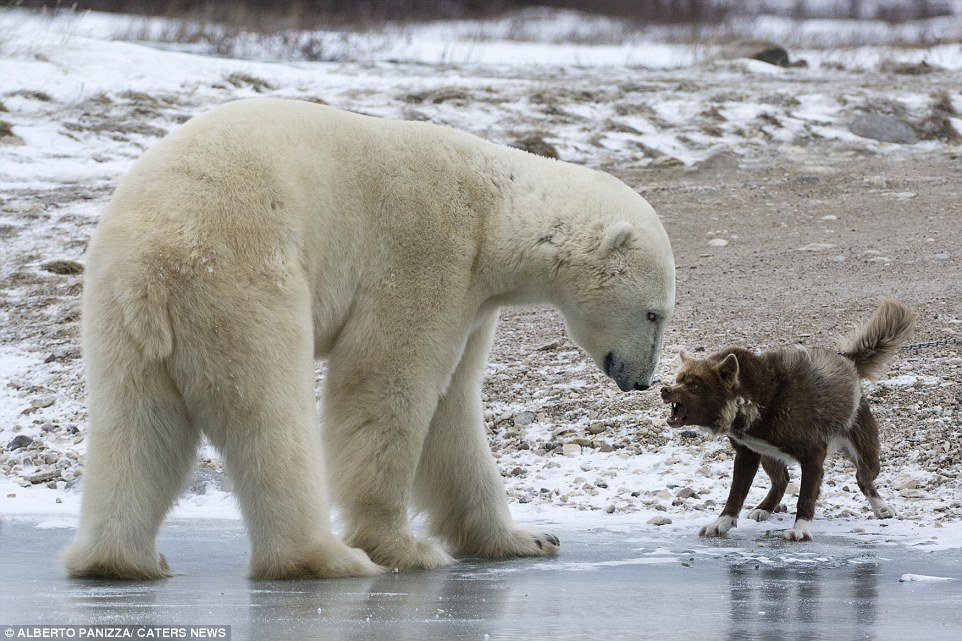 The wild polar bear was seen approaching the chained dog. The dog, who is known to be fearless, did not pay much attention to the huge animal approaching it. As the polar bear came closer, the brave dog got up and starts growling at the full grown, 1000 pound bear, showing no fear. According to Panizza, who is a resident of Parma in Italy, polar bears are common there.

Despite their differences in size, the dog continues to stand its ground rather than running away from the bear in fear. 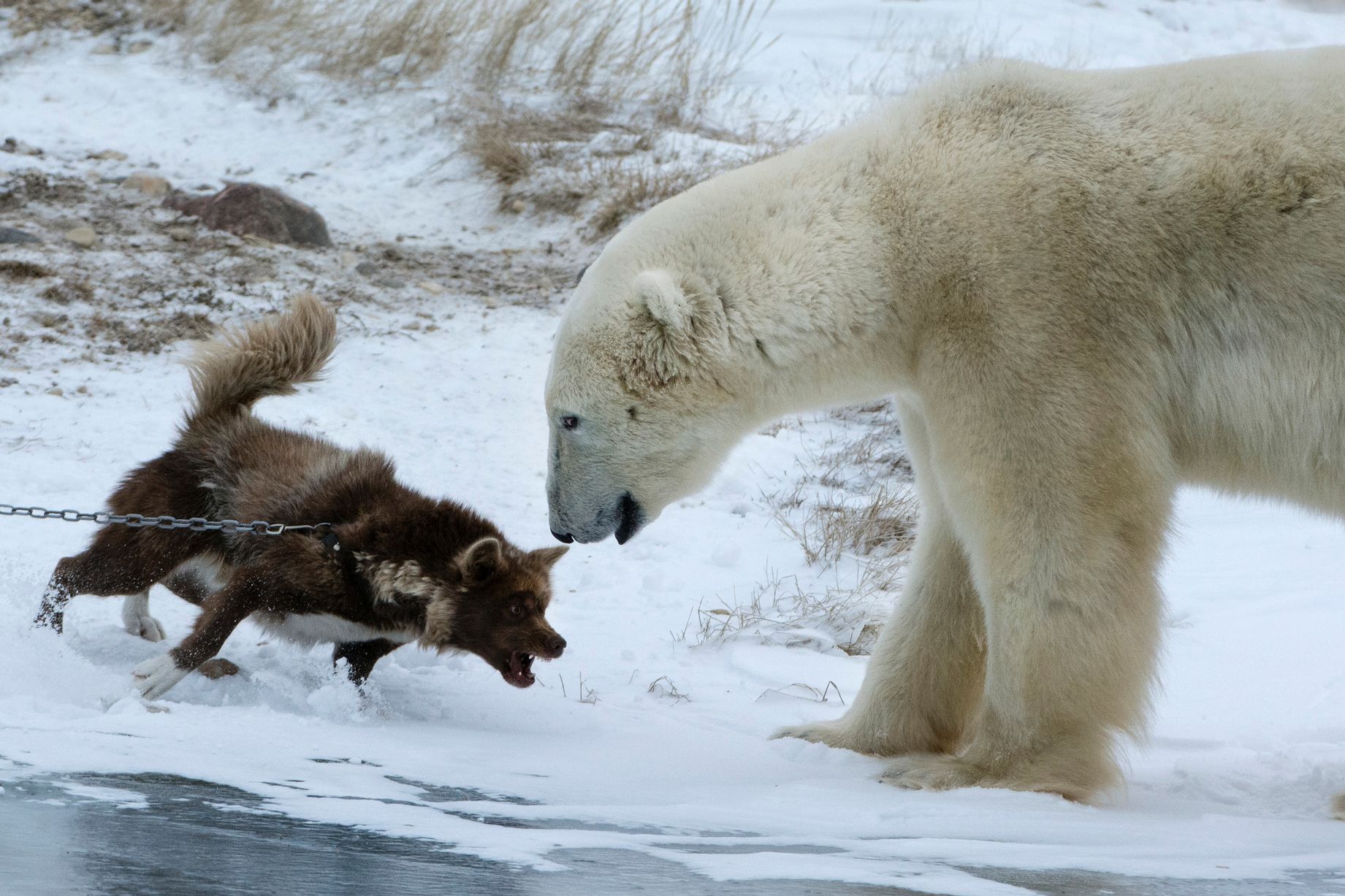 “The dogs live not far from a town where polar bears often pass through. This one seemed to be curious and even though much bigger it was eager to make acquaintances with the dogs.”

The dog begins to bare its teeth as well as barking and growling as the polar bear gets closer. 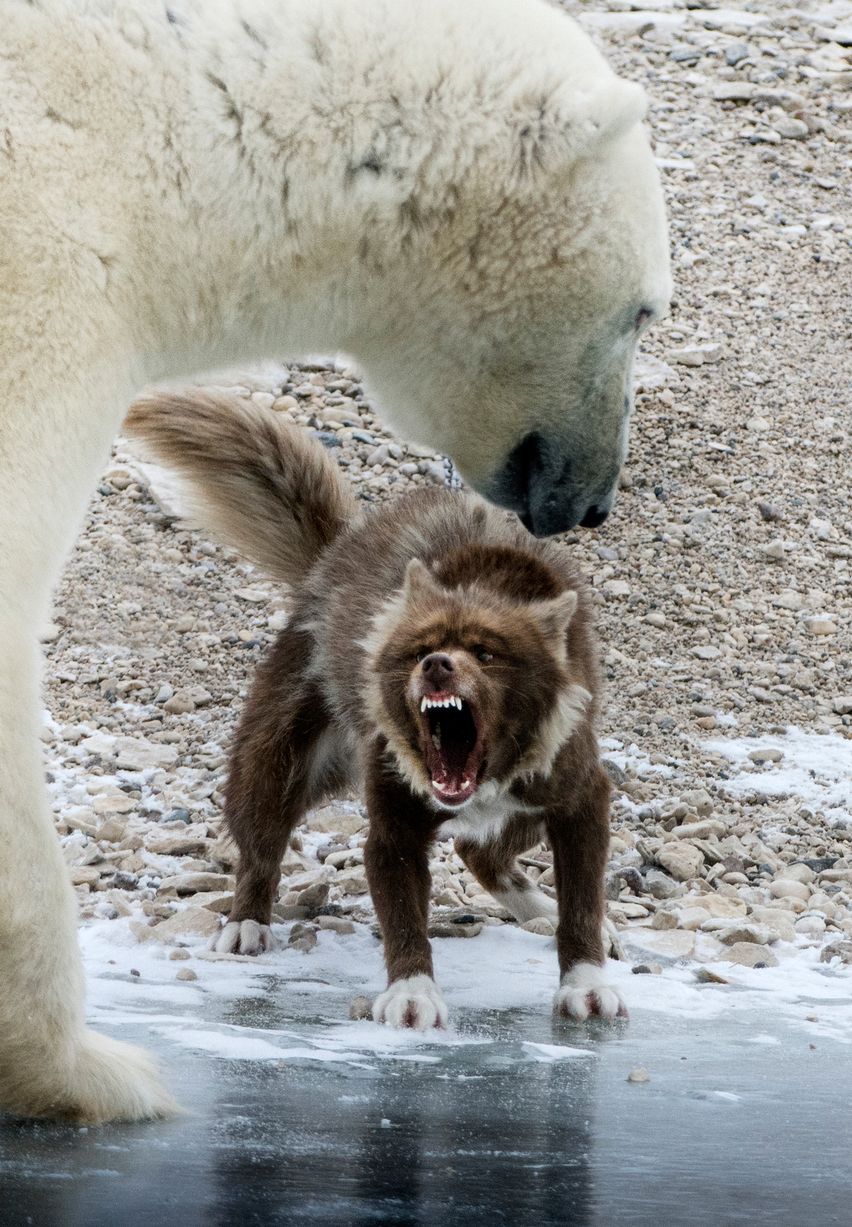 He was quick to add that while these dogs are known to be ferocious, even they keep a safe distance from polar bears, which are even larger than the already large Grizzly bears.

The two animals square up to each other. 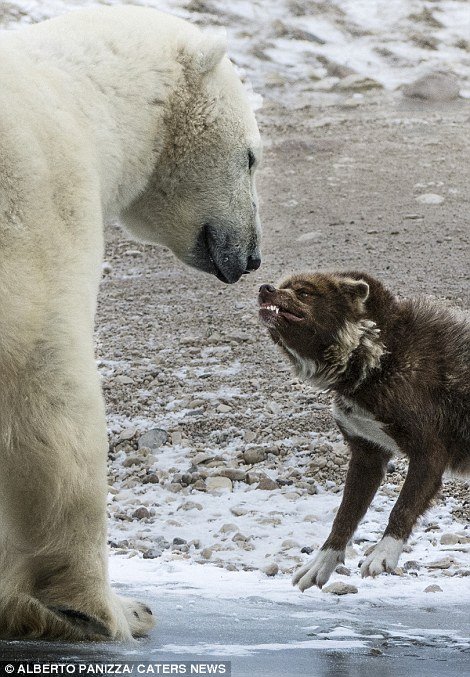 “Even if they are trained to fight bears, the dogs usually seem afraid,” he adds.

The dog’s owner claims that he breeds the strongest dogs in the world and they sometimes do throw themselves at the bears to scare them off. 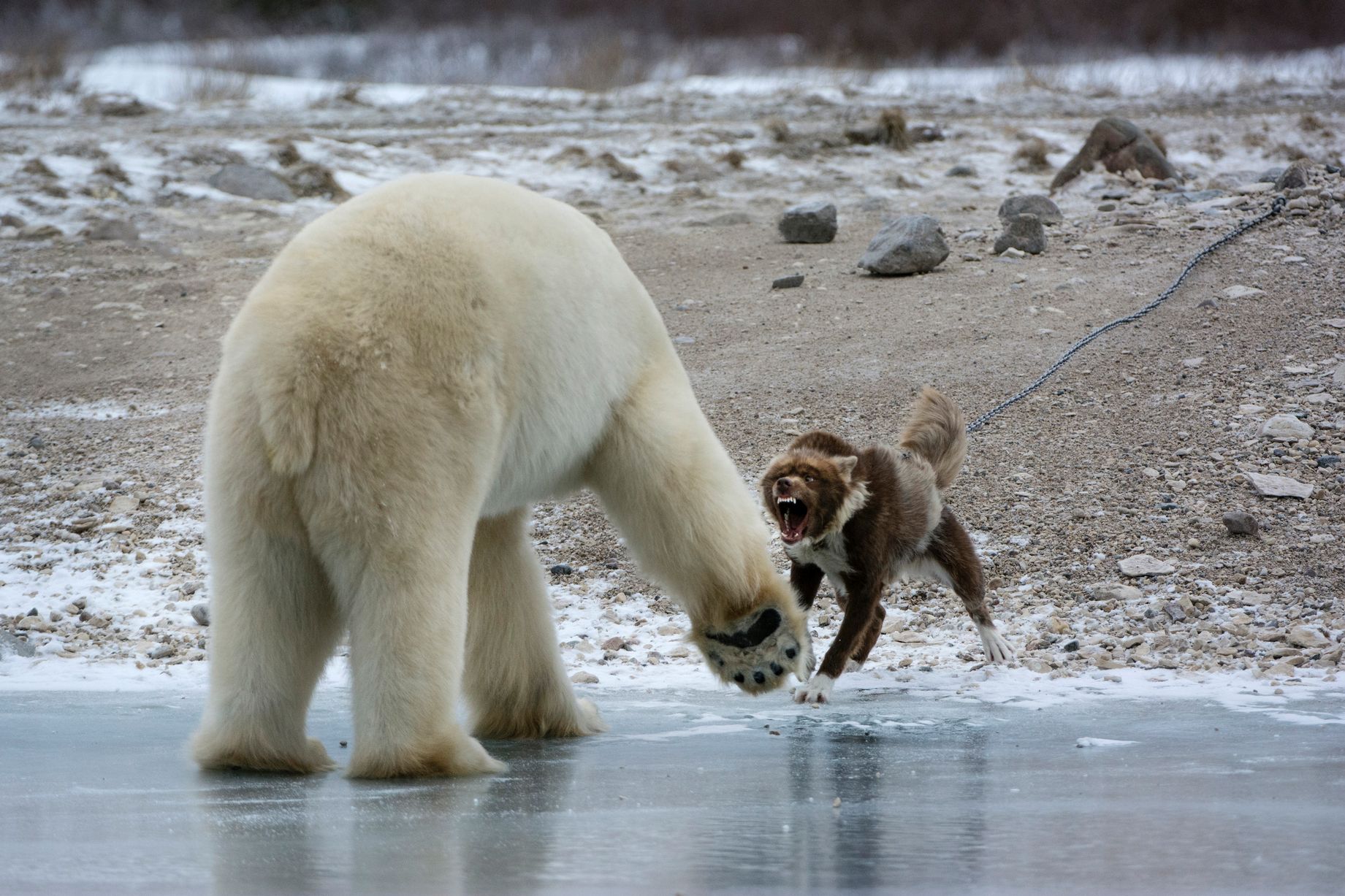 Panizza believes that a mixture of the dogs survival instincts, its training as a guard dog and pure madness is what led to this remarkable confrontation. Add to it the fact that the dog was chained with a long leash might have made it feel even more cornered and threatened, resulting in it standing up to the polar bear, looking it in the face and making it flee.

Rather than stay and face the frenzied dog, the polar bear is forced to make a retreat and trudges away into the distance. 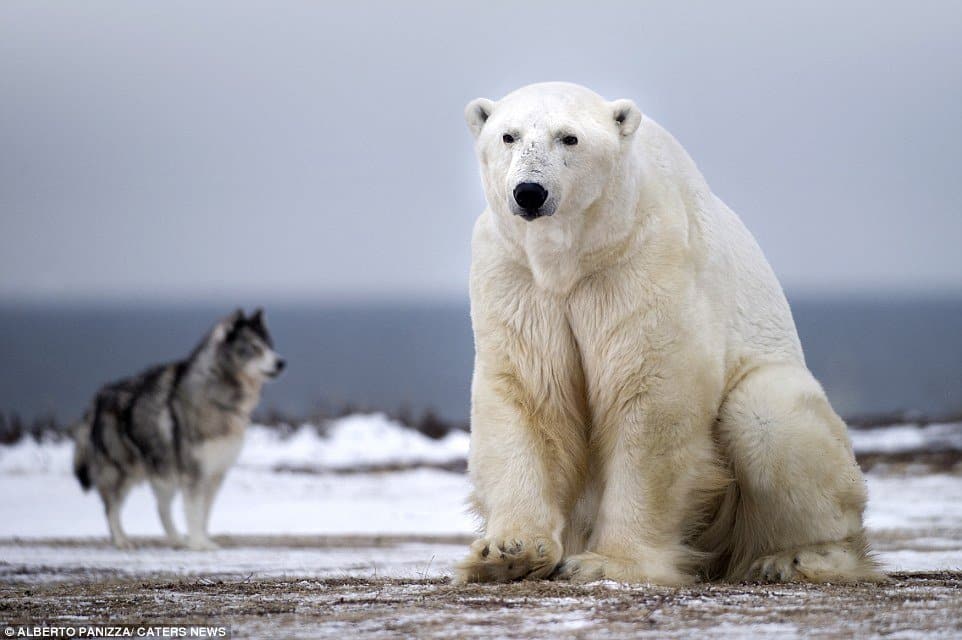 “Either due to their survival instinct, or pure madness, they sometimes throw themselves at the wild giants like this one did.”

The moment the dog took on the bear was captured on camera by Italian photographer Alberto Panizza, who visited Canada last month. 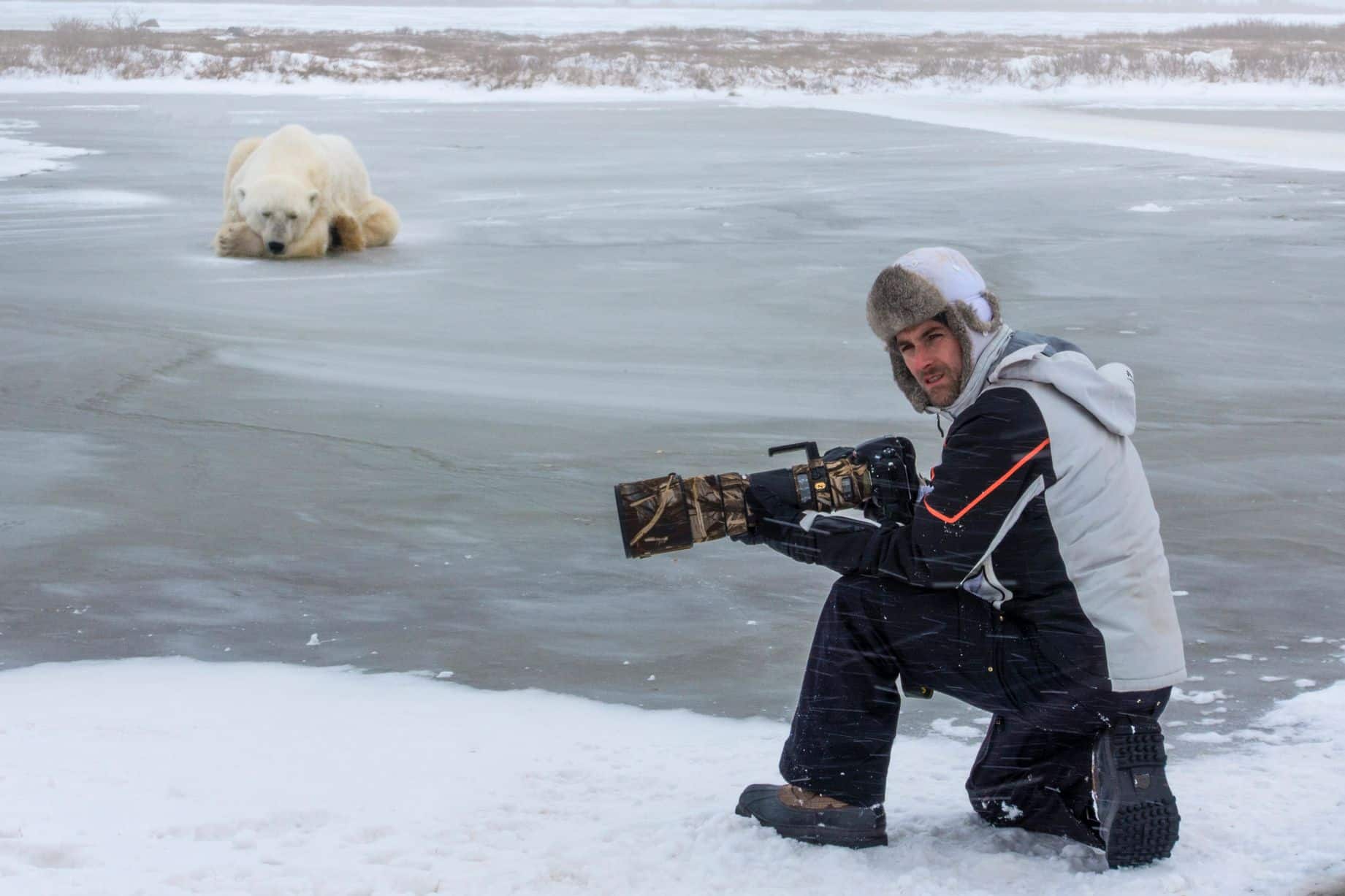 According to the owner of the guard dog, he believes that his dogs, who are also used to pull sleds, are amongst the most fearless mutts on the planet — apart from also being the strongest.