With Timehop or On This Day, it has become a normal thing for us Facebook users to see or share old posts on social media. What could make a particular entry stand-out, however, if when a post or status was able to predict the future with uncanny accuracy.

That’s exactly how Pablo Reyes recently got a load of online attention.

You see, the guy posted a status dated December 27, 2015 and it impressively predicted several things that just happened this 2016 – like the deaths of Prince, Muhammad Ali, Kimbo Slice, and even Harambe the gorilla. He also mentioned that the United States will “experience the worst mass shooting.”

Facebook user Pablo Reyes amazed thousands with his ‘prophecies’ which gained thousands of shares and comments. 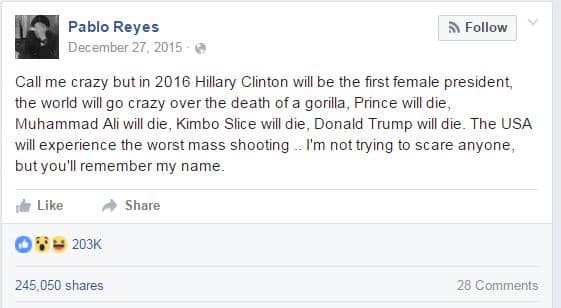 Pablo likewise foretold two yet-to-happen events such as the victory of Hilary Clinton as the first American female president as well as the death of Donald Trump. He then ended with “I’m not trying to scare anyone but you’ll remember my name.”

Spooky, right? Well, people are obviously blown away with his remarkable gift of prophecy because so far, the post has garnered over 203,000 likes and 245,000 shares.

Keen-eyed netizens, however, quickly pointed out it’s actually nothing more than a Facebook trick.

According to a post by the Mirror, anyone can easily “predict the future” by using this simple technique:

“All you have to do is write a status on your wall as usual. But before posting, select the clock icon and set the date – which can be any time in the past (or you can schedule it for the future.)”

To do the same trick, all you have to do is to write a status and then set the date.

Once you’re done with your “prophecy,” just click publish and voila – you’re already a psychic.

Try this out on Facebook and see if you can fool your friends – or thousands perhaps, like Pablo did.