First, there were infographics – and then there were memes. But as the digital world advanced, people eventually discovered gifs. They are basically short and silent animations. They appear to be a mere second video but only without any sound. However, there are actually people who say otherwise.

You might have noticed this gif on various social media sites, posted by netizens who claim to hear a sound from it. Is it not odd, right? It definitely is but it is somehow interesting. This gif below bears the caption that reads: “Why can I hear this?”

Well, why not give it a try and experience it yourself. Did you hear something or not? In any case, people did – and it is taking the internet by storm. Check it out below:

The gif was created by a Twitter user named Happy Toast. Interestingly, there is an explanation for this odd phenomenon. First, Dr. Lisa Debruine, a researcher at the University of Glasgow, wanted to confirm just how many individuals can hear a sound from the gif through a poll. And believe it or not, 75 percent of them agree.

If you also hear it, you are not alone. 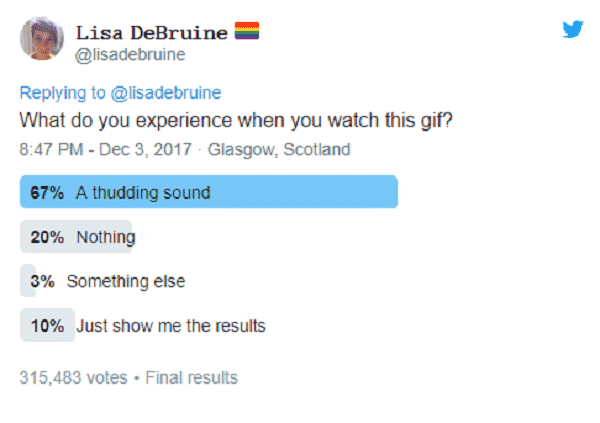 Four percent of the total participants suggest that they heard “something else.” Others say they heard some sort of “bonging,” while there are those who claim to hear a “sproing” sound.
So, what exactly is the reason behind this? Why are people suddenly hearing a sound from this gif?

First off, this is not really the first gif of sort to surface. There is this one where elephants are playing see-saw.

Keep in mind that our perception of sound can be highly influenced by visual information. In a sense, this phenomenon is not limited to soundless gifs. And it is actually a thing that happens on a daily basis.

This is basically called the McGurk effect (check out the video below to know more about it). It refers to the fact that your brain can be tricked into hearing various things based on the information obtained by your eyes.

Source: Of The Box

It is also important to note that the perceived sound can be different from one person to another. That is because what a person sees can override what he/she hears, and it is usually different from another person. Still, it is an interesting thing to experience.