If travelling is part of your bucket list this year, then you better be watching this travel-adventure film by Alexander Tikhomirov. This five-minute video was shot entirely on the different parts of the island of Bali. What’s so different about this video, you say? Well, just about the everything that you weren’t aware of to be in Bali.

The video features motorcycling through the different areas of Bali that isn’t just the beach. We’re all pretty much aware that the island of Bali is a dream destination because of its sandy white beaches, but there’s more to it than that. Tikhomirov was able to go motorcycling with his often bikini-clad girlfriend through the outskirts and small provinces in the island.

Snorkel your way through the clear, blue waters of Bali. 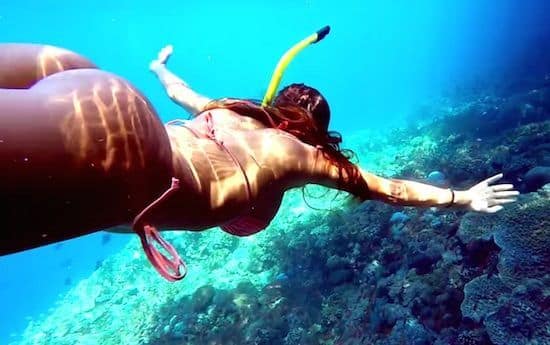 Snorkel your way through the clear, blue waters of Bali.

The video also showcased Alexander as he went cliff-hopping, jumping straight into the water, from a cliff that is several feet high. Of course, he, together with his girlfriend and Jay Alvarrez, who is another travel filmmaker, went snorkelling in the clear, blue waters. There was one scene that featured Alexander’s girlfriend among the beautiful and colourful fishes as she was snorkelling. The trio also went surfing and a bunch of other fun things that you would probably do, too.

This new travel-adventure video will make you wanderlust on Bali so bad, we wouldn’t be surprised if you actually booked a trip to the glorious island right after reading this article. Merely watching the video on loop won’t be enough to satisfy your appetite to travel and experience the island the same way Alexander’s group has.

Imagine yourself swimming with some of the most colourful underwater species, or go cliff-diving with your buddies at one of the most beautiful islands in the world, now isn’t that just every bit awesome? It would be even way better if you were able to actually experience it for yourself. When you do decide to go, don’t forget to send us a photo or video of your crazy antics while in Bali, ok?